I wanted to post my pregnancy update at 16 weeks (I'm now 18 weeks today) but we had to fly back to the States very suddenly and everything got put on hold.  I'm not going to do a separate post but wanted to mention it here.  Ryan's older sister, Emily, and her husband, Sean, had a baby boy a little early on August 4th, Patton Tuohey Graves.  Susan, Ryan's mom, was visiting us in England at the time and had to catch a last minute flight home and made it just in time for the birth.  Out of respect and privacy for Sean & Emily I'm not going to post pictures or write about the details here.  But wanted to let you all know that we lost our nephew 10 days after he was born.  Our family is grieving and we ask for prayers to cover Sean & Emily.  Thank you guys who already have been praying for us.  We feel them! 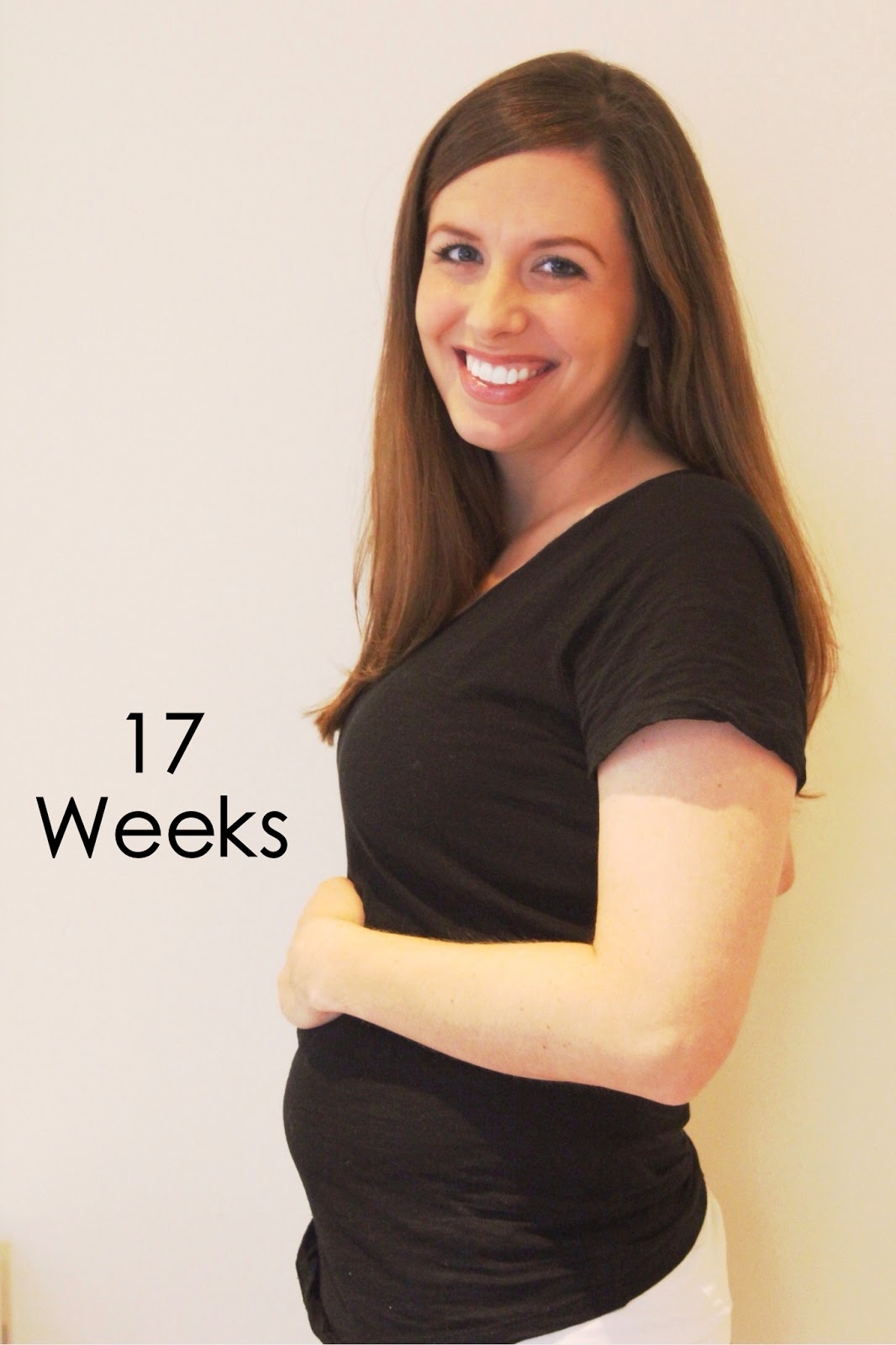 Picture from my pregnancy with Maggie.

How far along: 17 weeks
Size of Baby: 5.1 in & 5.9 oz
Fruit/vegetable comparison: Onion
Total weight gain: Still down 3 pounds from my pre-pregnancy weight.  I know those pounds will be packing on soon!
Sleep: Still not too bad. There have been a couple of nights I've woken up with my mind racing and it was hard to get back to sleep.
Movement: YES!! The kicks and jabs are getting stronger.  I think we are getting so close to when Ryan can feel the baby from the outside!  I found out at my 16 week ultrasound the reason I have been feeling this baby since 8 weeks.  Apparently, my placenta is attached on the back of my uterus (posterior) so the baby is all at the front.  It's been so fun feeling this baby so early on!
Unglamorous body changes: A little tired but could be do to jet lag.  Still not eating as much as I probably should be at this point.  I've felt a little bit of heart burn here and there but not bad.
Maternity Clothes? Yep!  Not having to do the maternity shirts yet.
Showing: I think so but I still don't think it's super obvious to strangers.  When I tell people I'm pregnant they are like, "I didn't want to ask...".  I guess I look like I ate a large donut (and probably did).
Food cravings: American food!  :)

What I miss: Missing family.
Best moment this week: We found out what we were having at 16 weeks, the day before we flew back to America.  We were planning to announce the gender right away but with everything that has gone on we've delayed it.  We may announce it in the next week or so though.  So stay tuned!
Looking forward to: Ryan feeling the baby.  We are also going on a much needed vacation in a little over a week to Greece!  I'm stocking up on maternity swimsuits!

Ryan had a three day weekend which we took advantage of by taking a quick trip to Ireland!  You can do that when it's right next door and have cheap airfare like Ryanair.  ;) 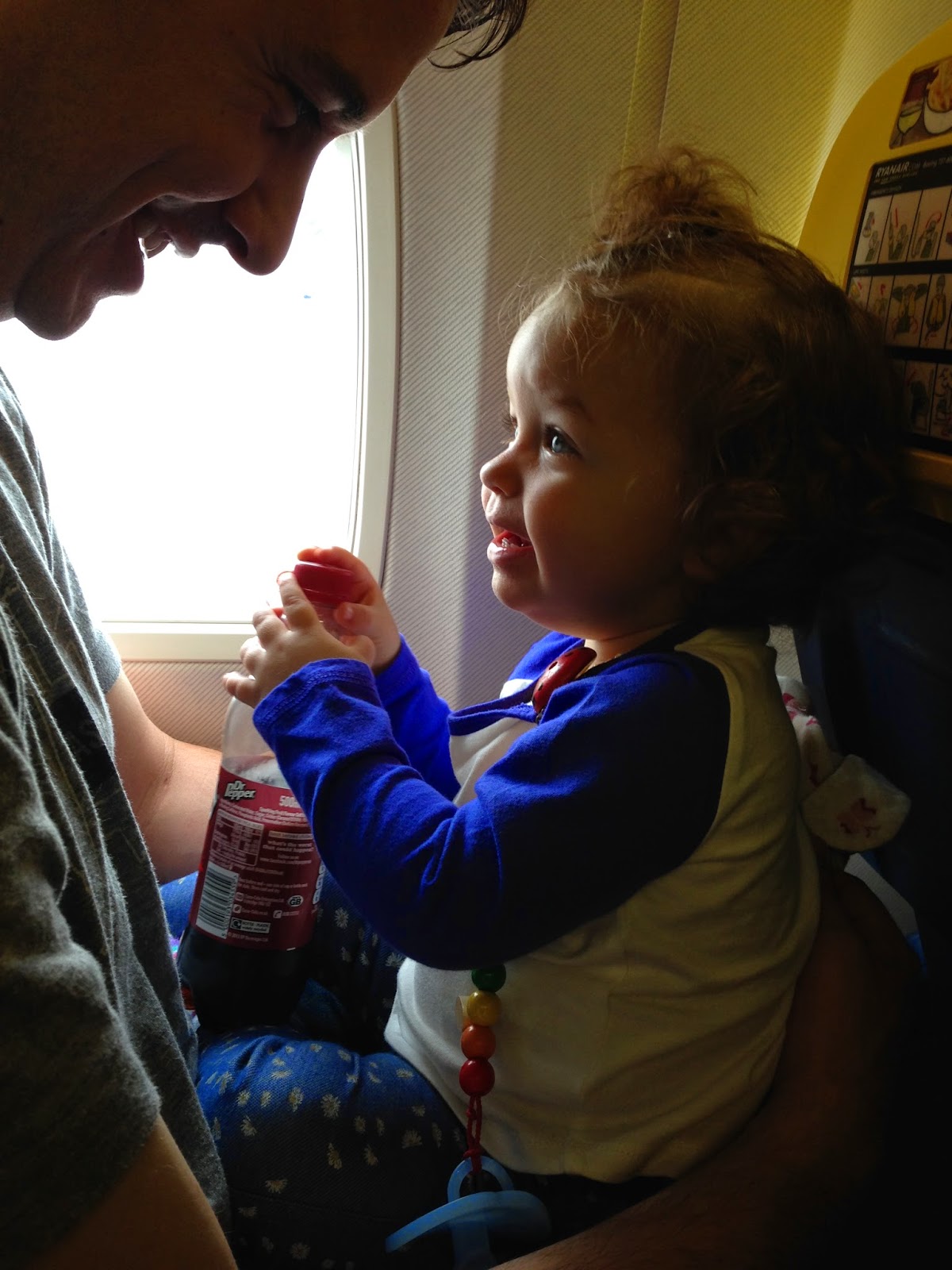 We flew into Dublin early Saturday morning and spent the rest of the day exploring the city. 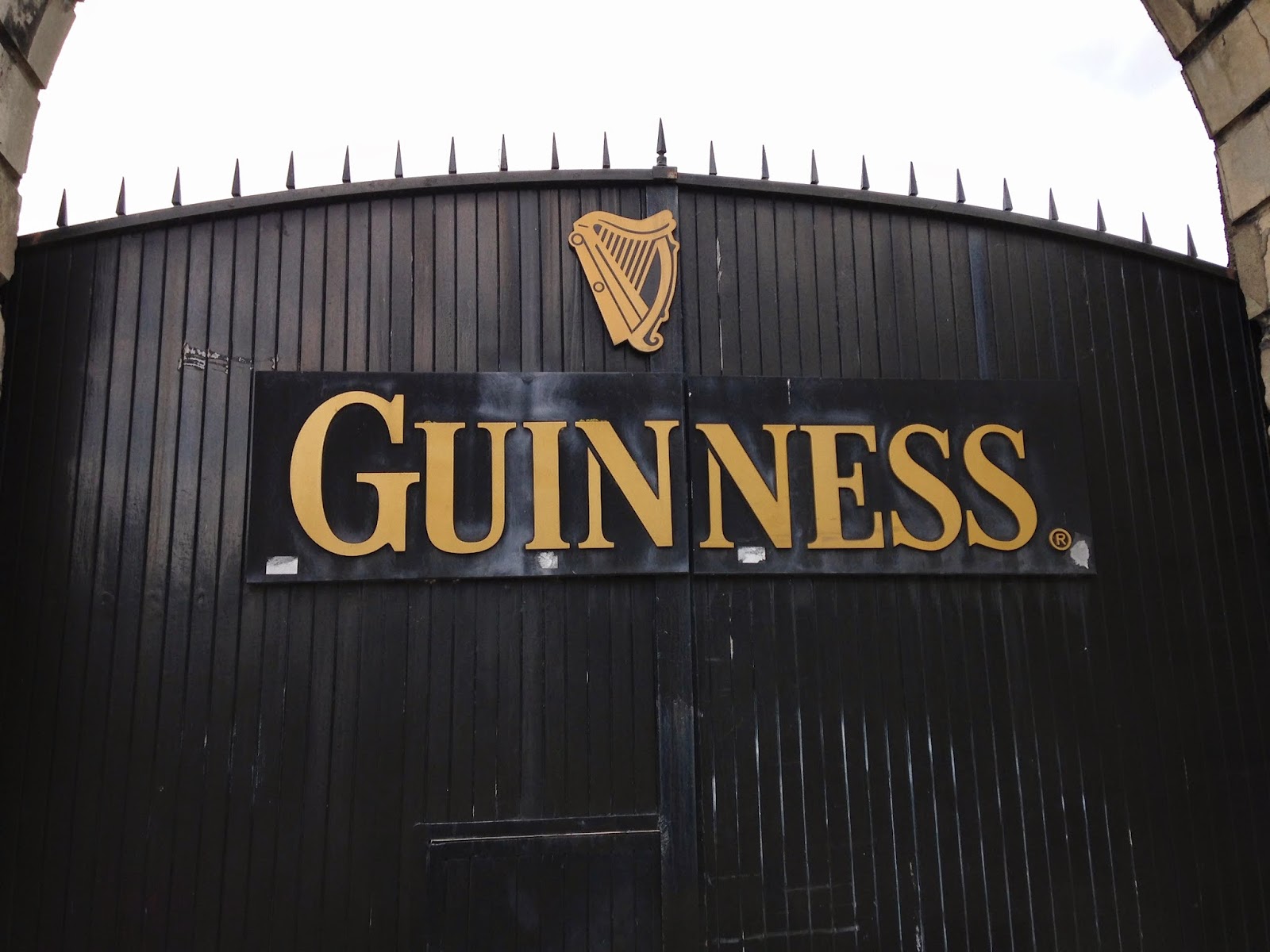 The Guinness headquarters and their huge brewery are pretty much center of the city.  It is like a local hero.  So we had to at least check it out.  We didn't actually go in to tour because that costs, but we took pictures.  Ha! 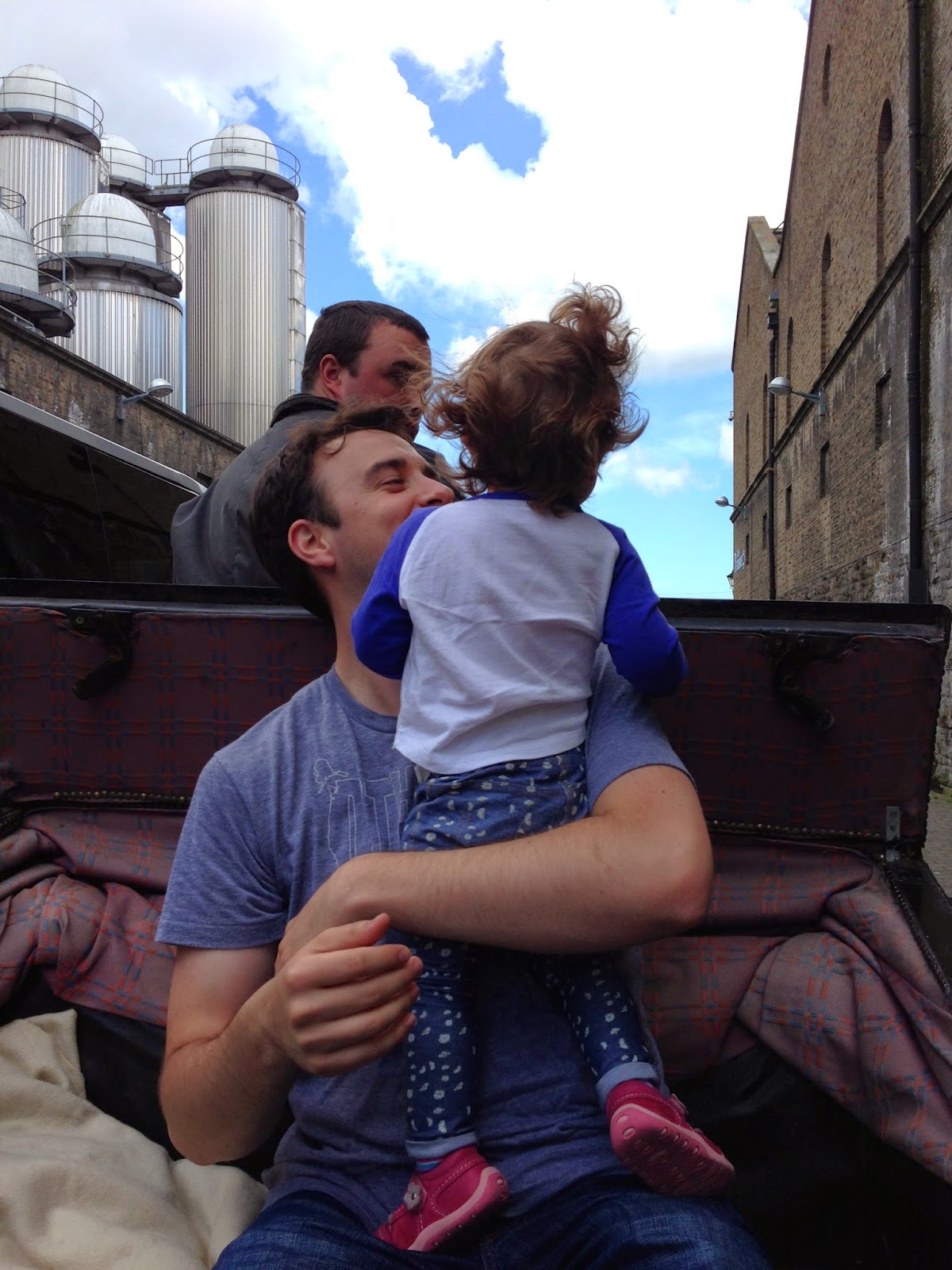 Then we were so tired from walking around the whole plant that we caved and took a horse drawn carriage ride to our next destination.  (We easily caved when we saw Maggie's reaction to the horse!) 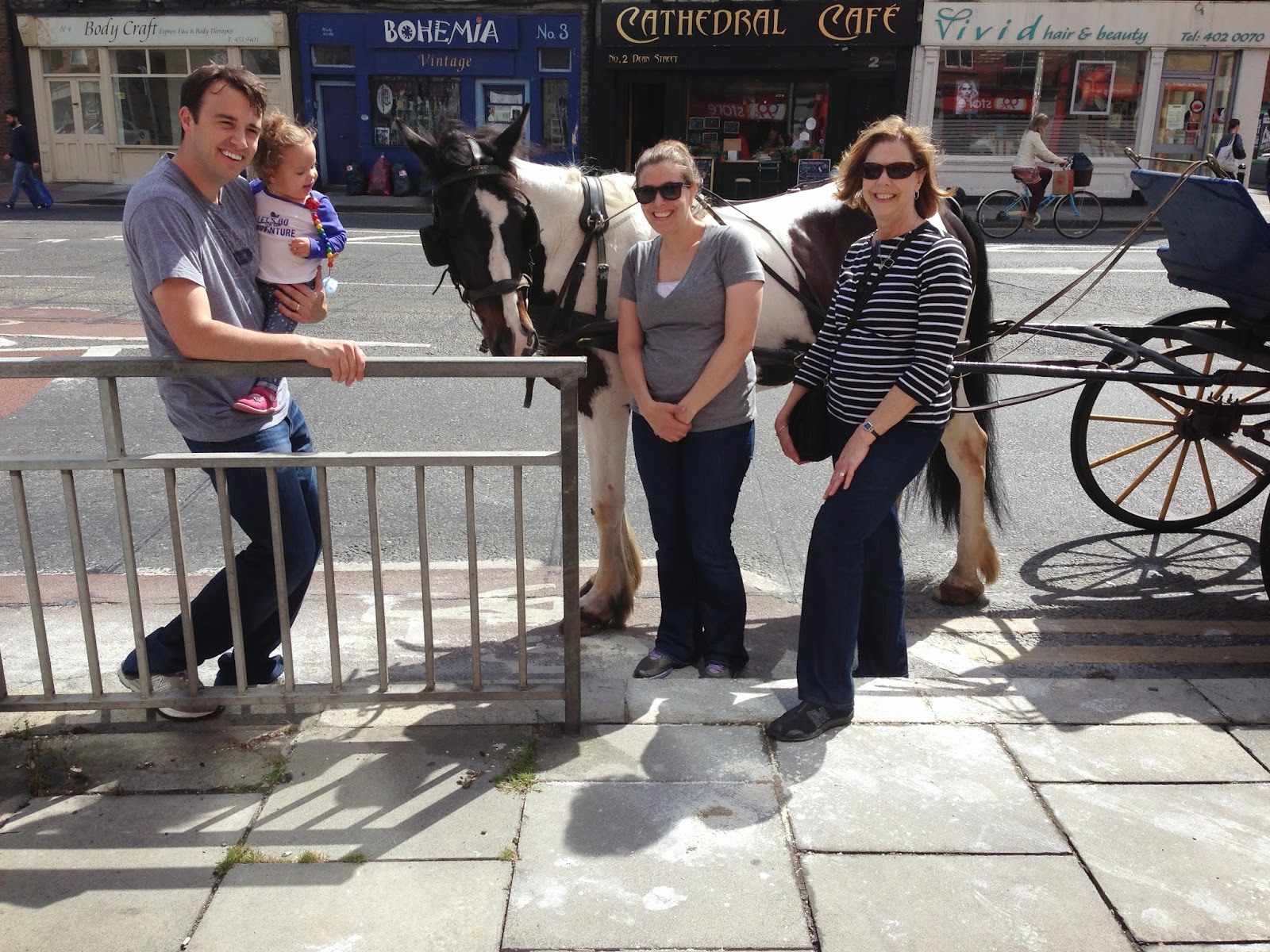 She could not keep her eyes off of it.  I guess daddy needs to buy her a pony for her next birthday!  I KID! 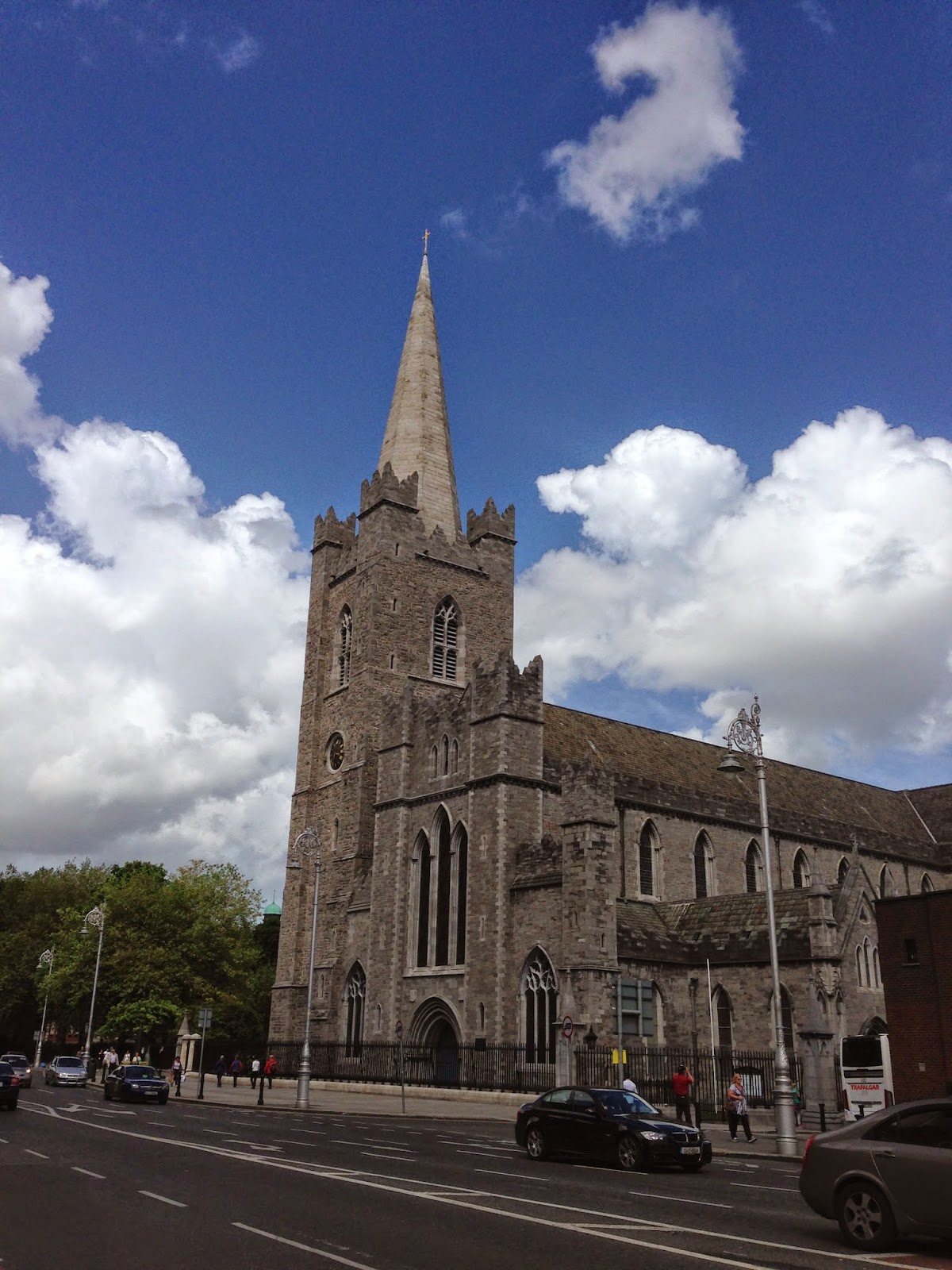 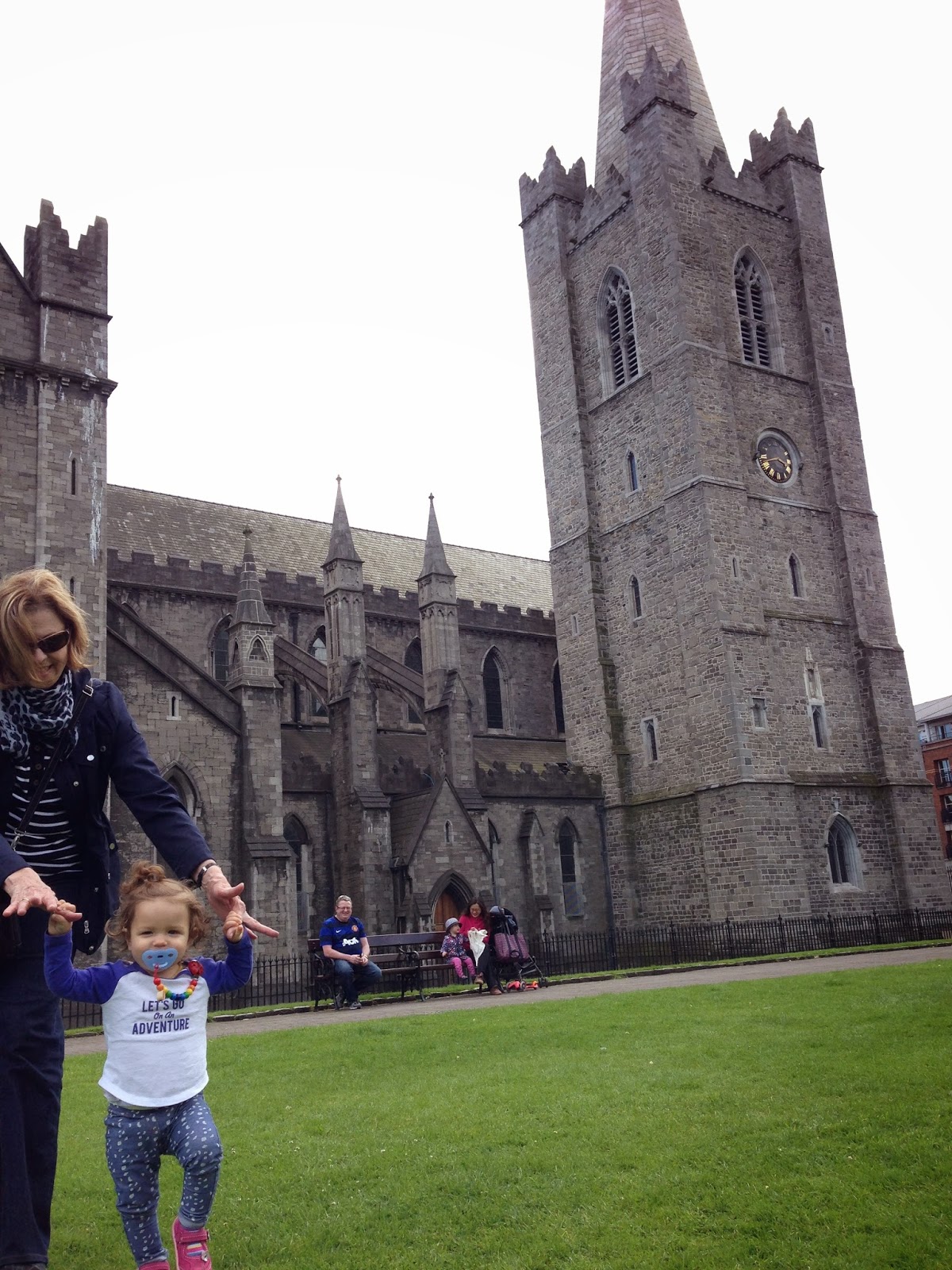 Maggie mostly enjoyed playing around the Cathedral and entertaining everyone.  Her shirt says, "Let's Go on an Adventure". 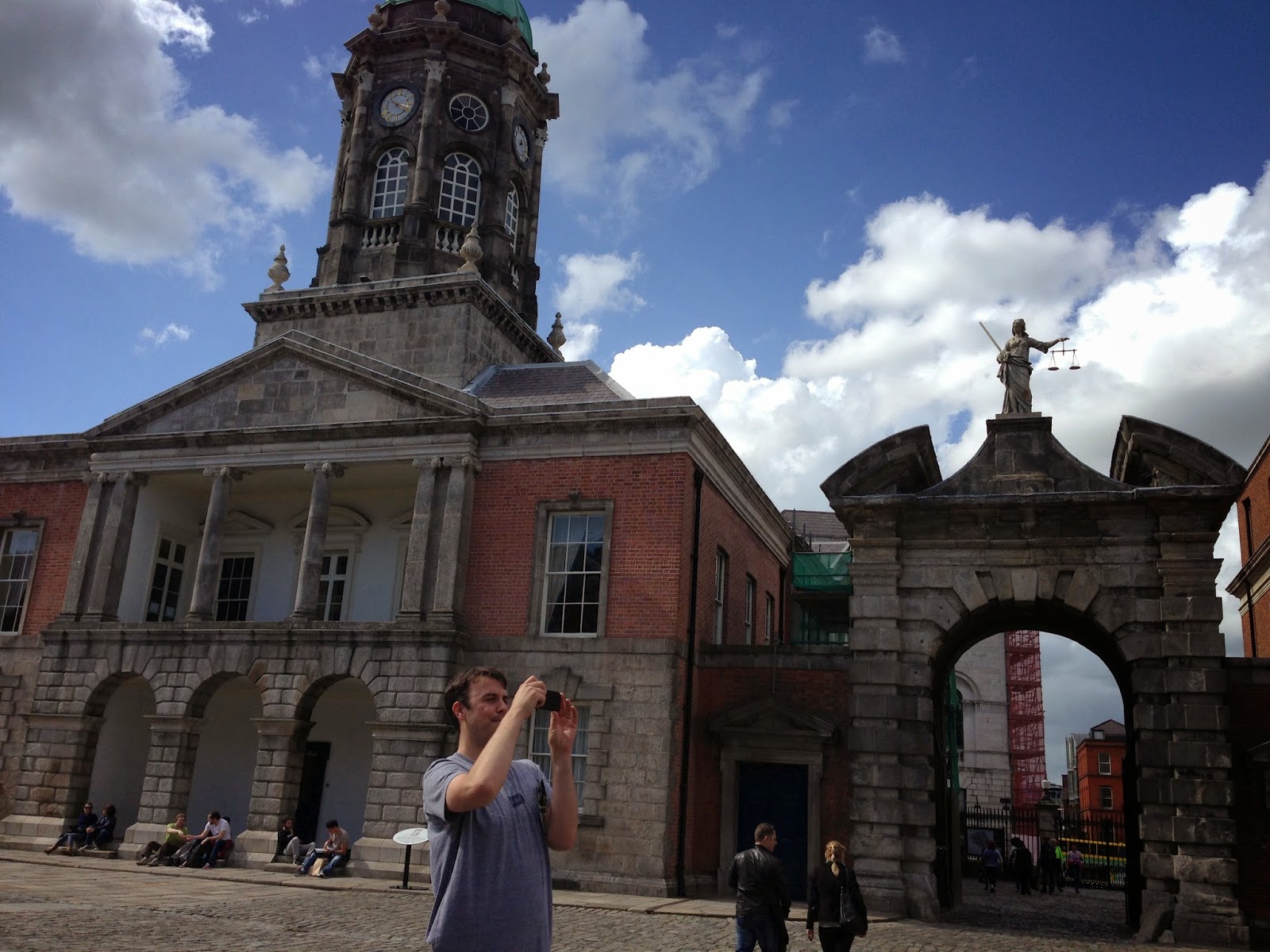 Checking out the outside of Dublin Castle, which didn't look like a typical castle to me. 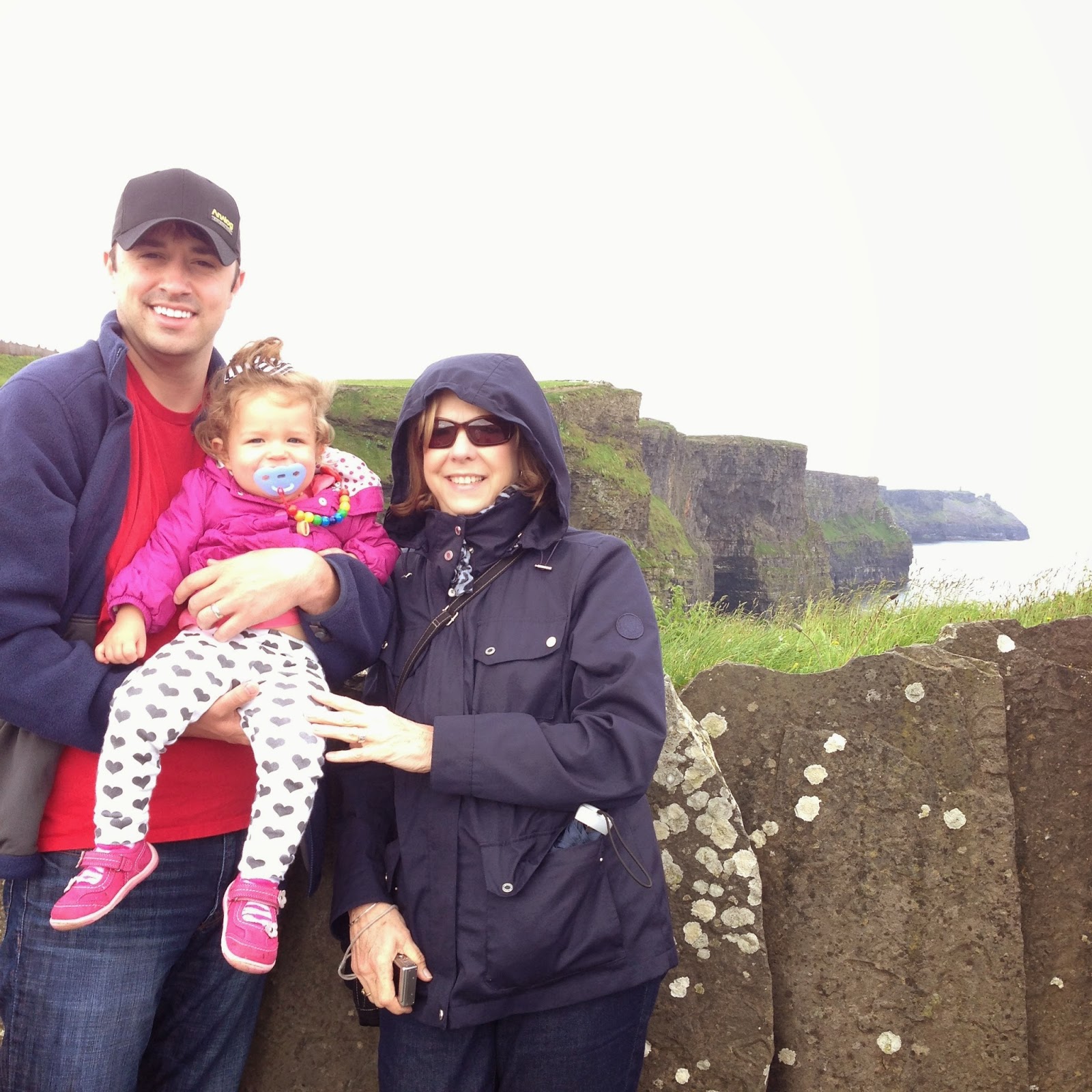 The next day we took a bus tour across the country that ended up at the Cliffs of Moher.  It was a great bus tour! 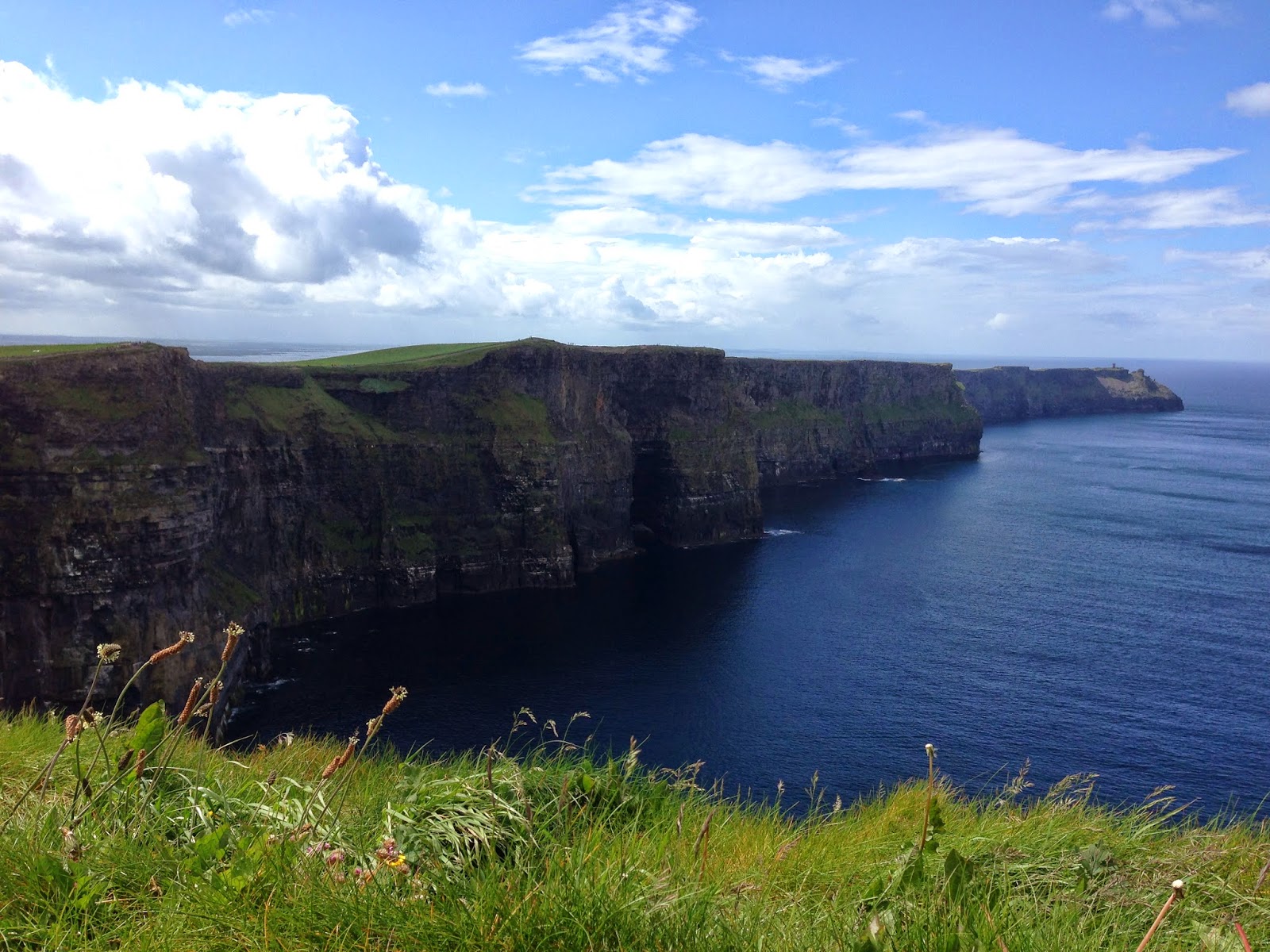 It was beautiful but very windy!  We would go from being cold to hot in minutes depending on what the wind was doing. 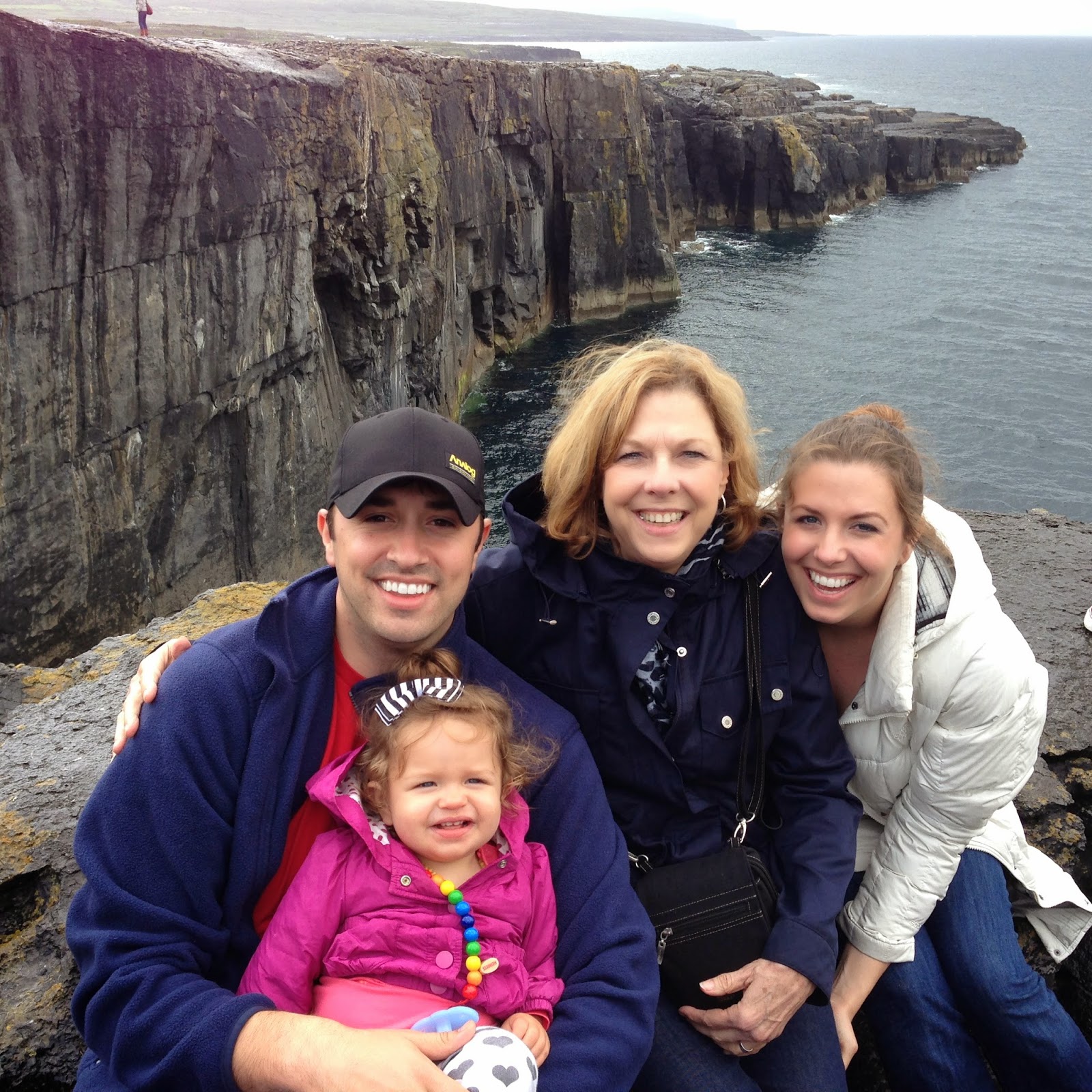 Favorite picture from the trip! 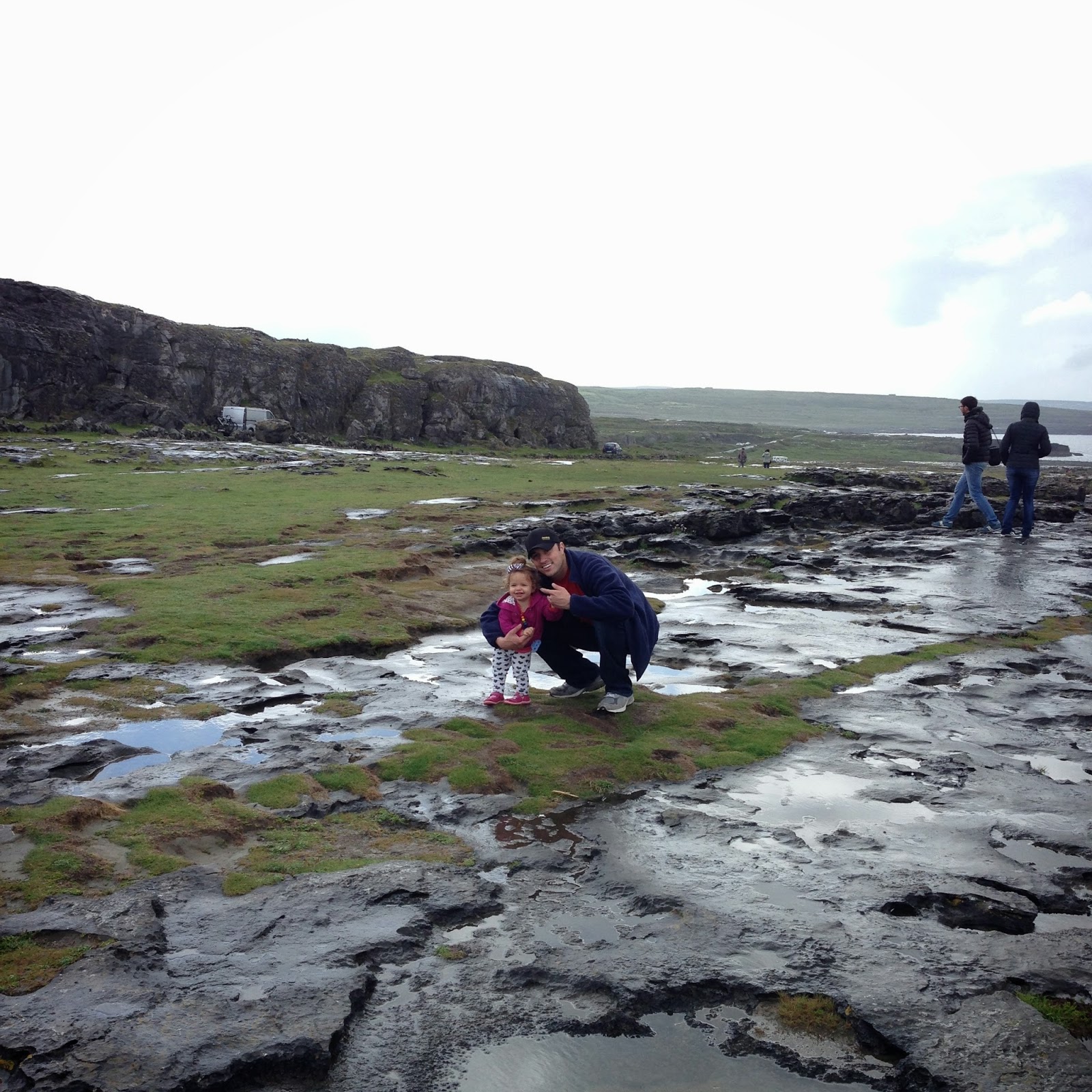 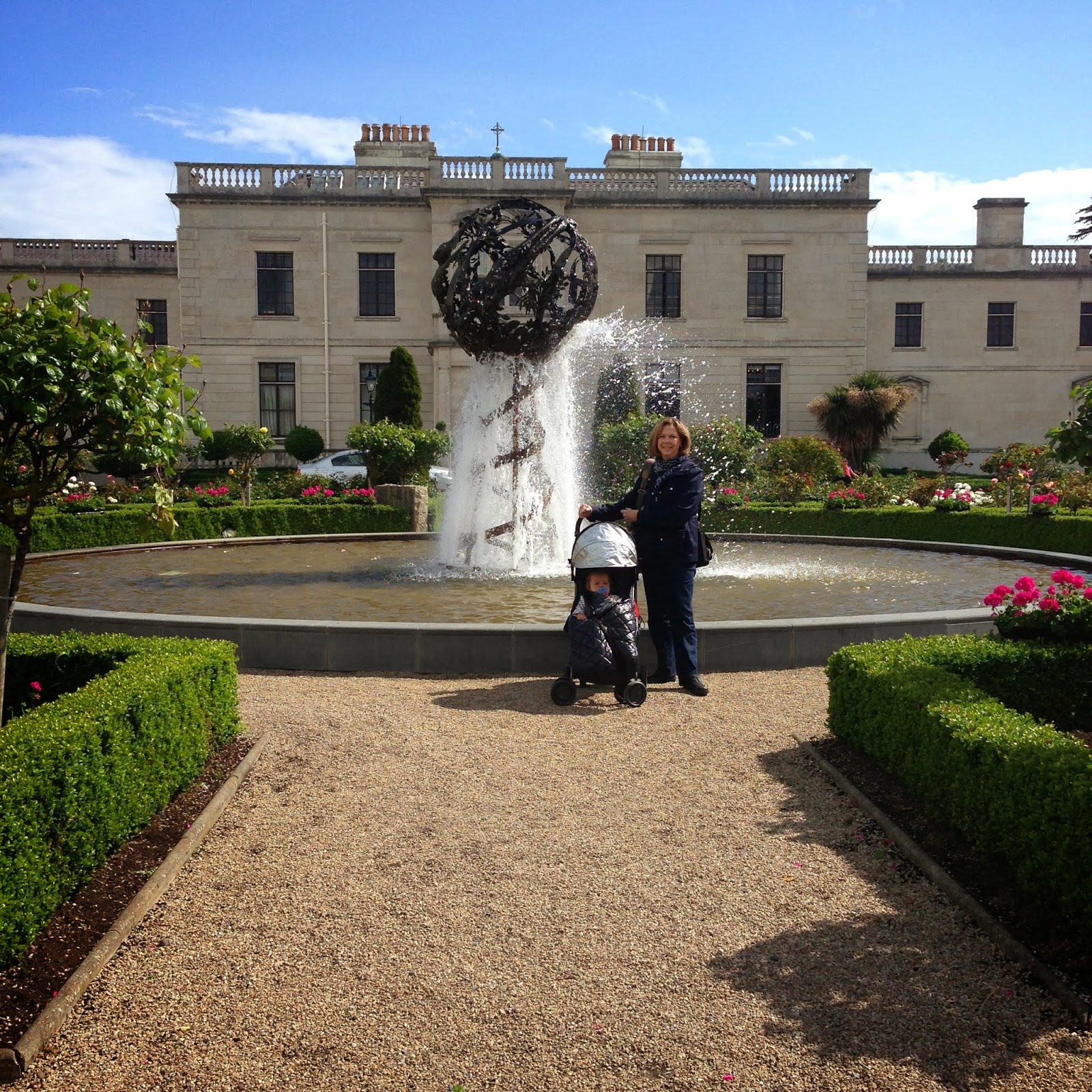 Our hotel we stayed in.
The final day we just explored more of downtown Dublin and popped into a few shops before we had to catch our flight home later that day.  It was a quick trip but packed with fun! 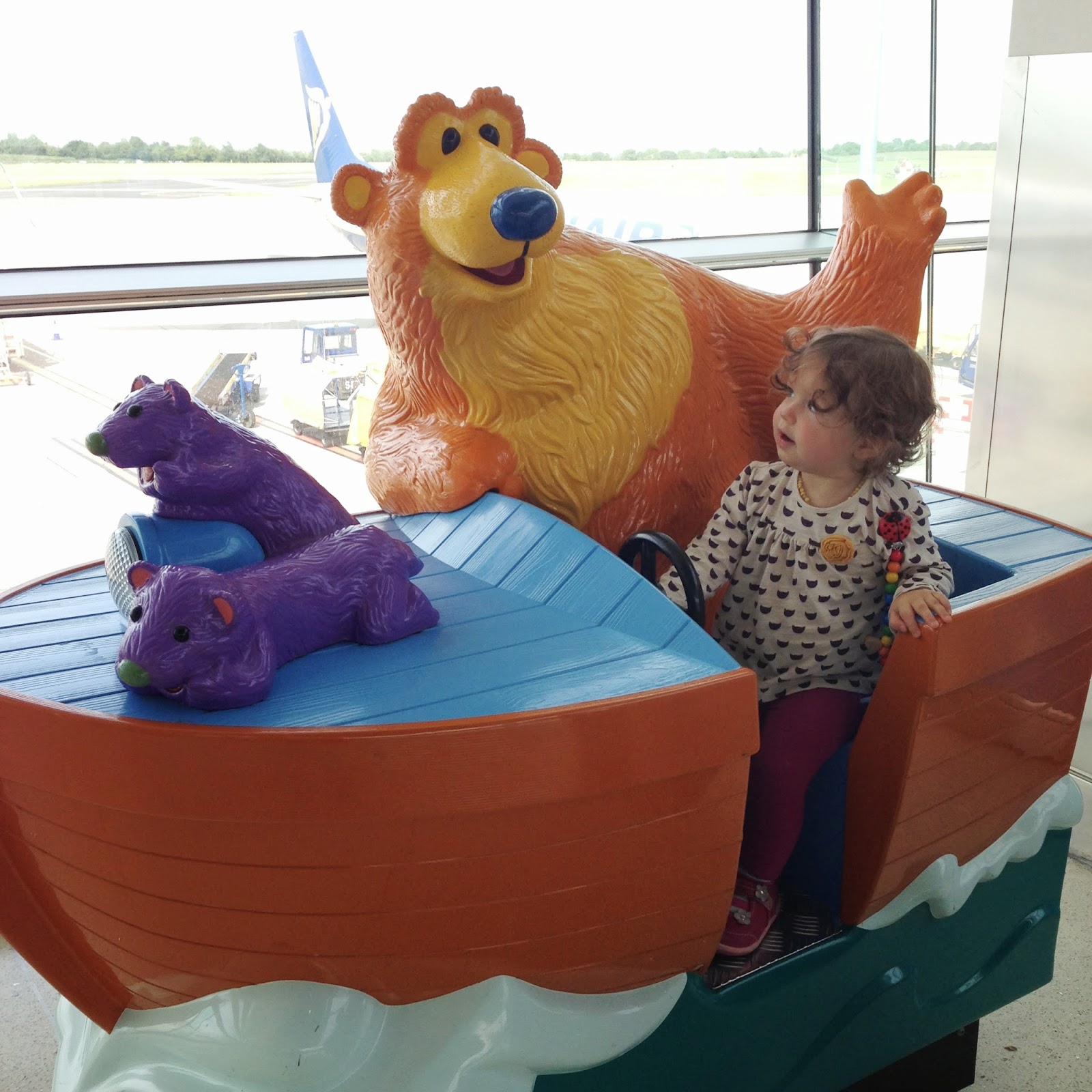 This was the first time Maggie's ever been on a little ride like this, and she loved it.  She actually became quite possessive over it.  Whoops! 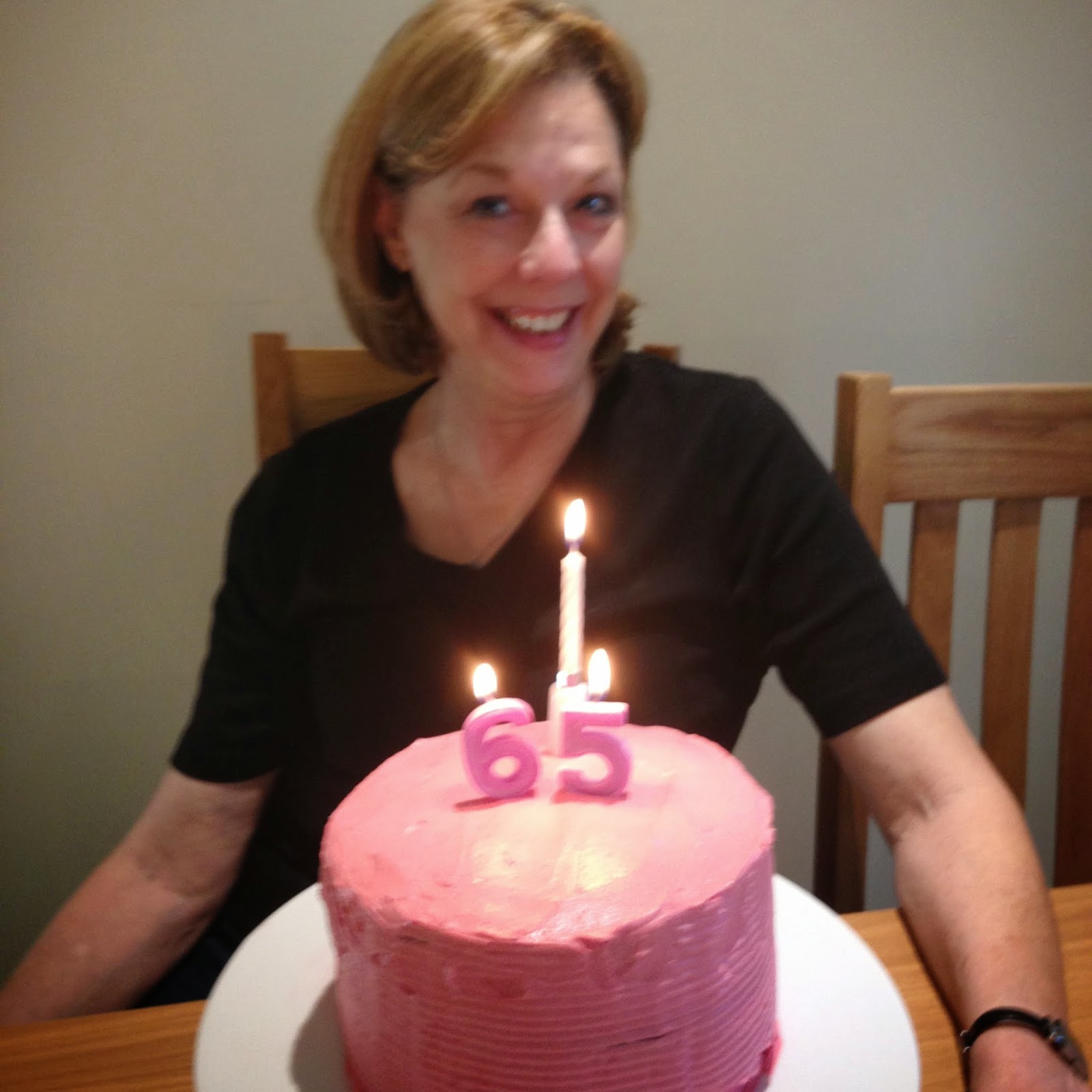 When we got home later that week we celebrated Nana's birthday early.  It wasn't until July 17th but we wanted to celebrate her in person because it's such a big birthday milestone! 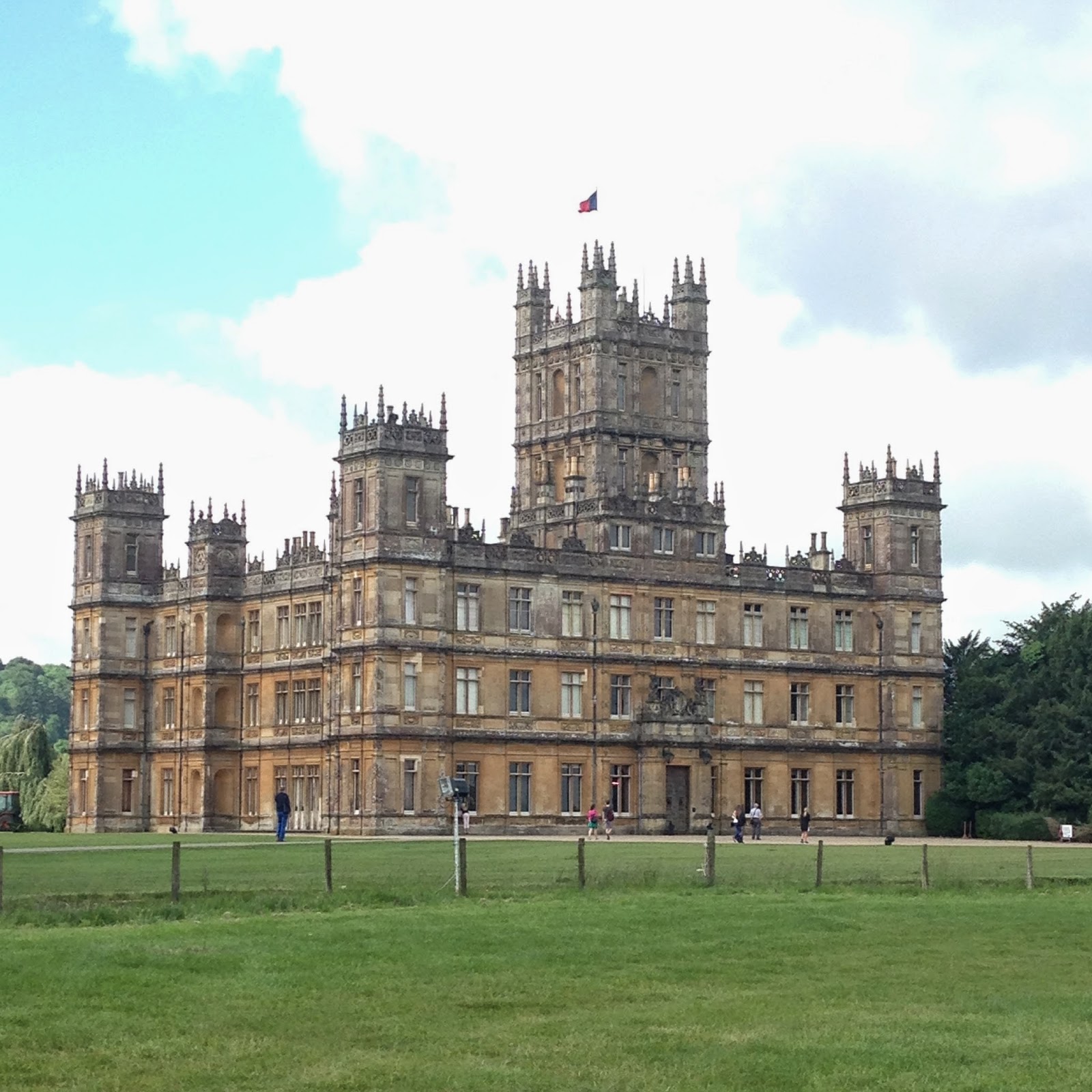 As part of my mom's big birthday, I surprised her with a private tour (a small group of about 20 people) of the Highclere Castle from the show Downton Abbey.  We even got to meet the Countess of Carnarvon, Fiona (the current owner of the castle). 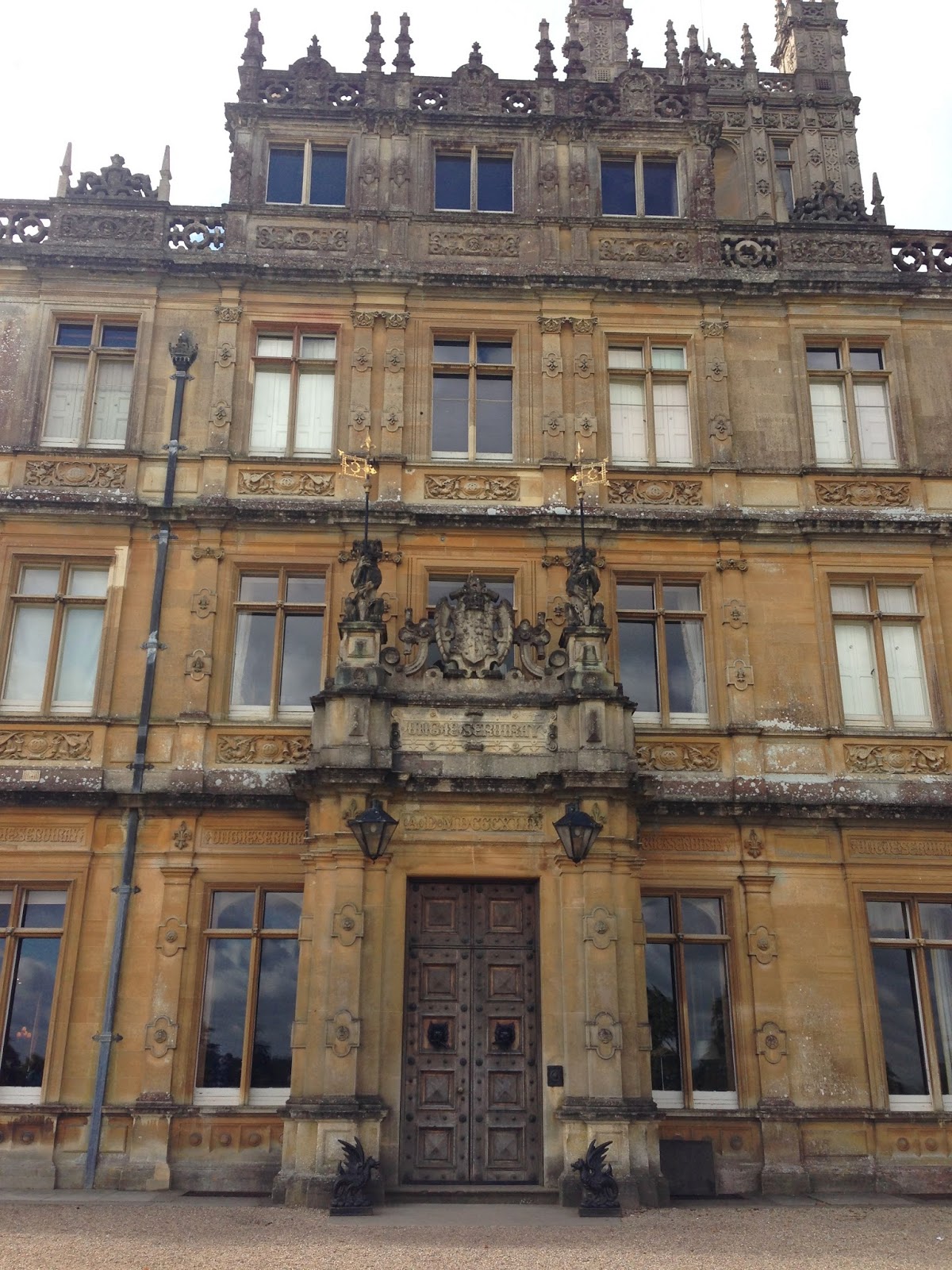 The iconic front door to the castle.
We were extremely lucky because the castle is only open to the public select days of the year and it was already booked through the end of the year!  I some how came across a private tour that was only available for two days and it just happened to be while my mom was visiting.  I jumped on the tickets before it could sell out.  It was a miracle I tell you!

We also left Maggie with a friend of mine so that we could really enjoy the tour and be able to listen to the guide.  Ha!  It was neat hearing them talk about how they film the show on the property.  Did you know that they film all the kitchen scenes in London because this castle has a modern kitchen now? 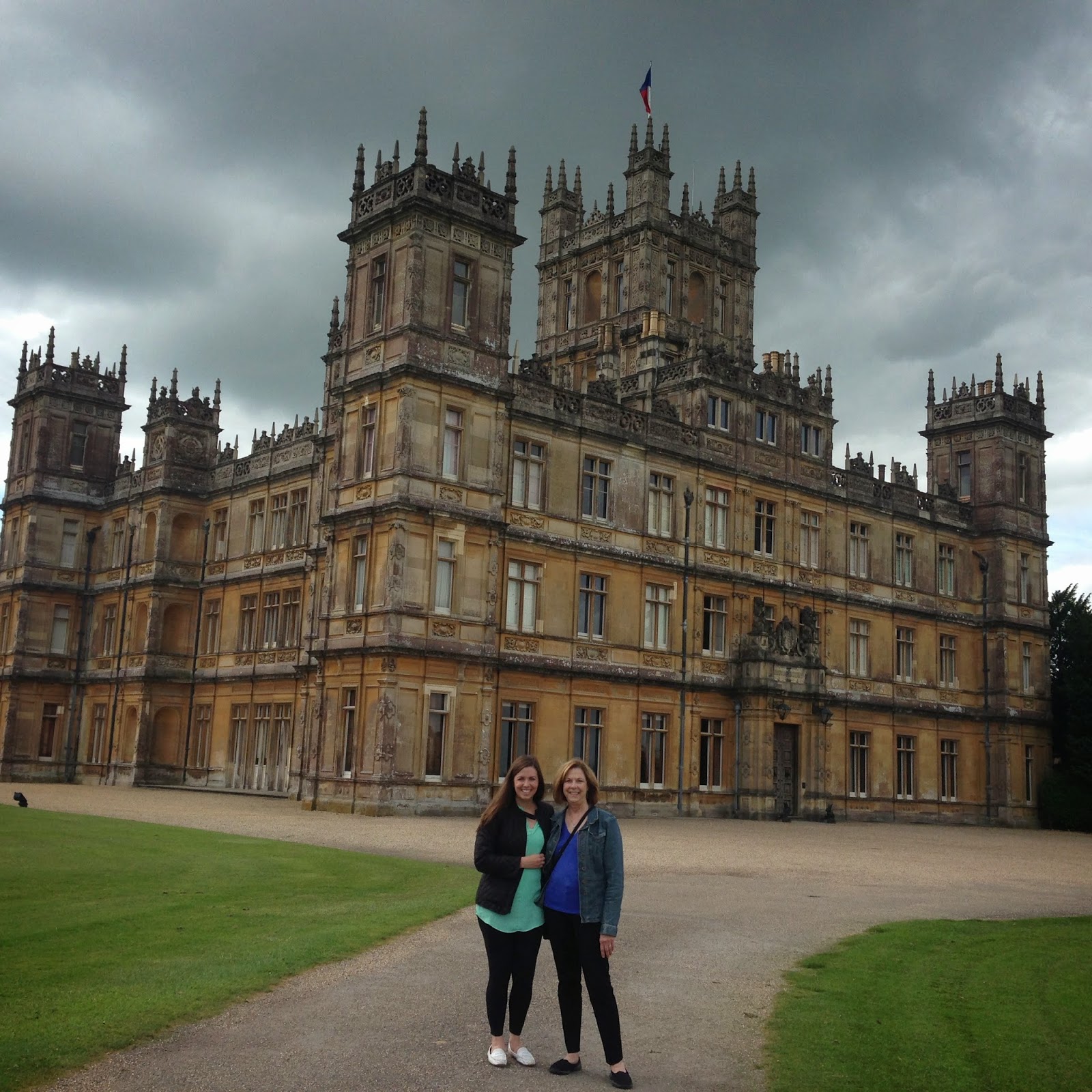 My mom is a big fan of the show, and I think really enjoyed exploring the inside of the castle and the grounds.  Did you know that part of the move The Secret Garden was filmed here??  I think this has to be one of my favorite memories so far in England.  :) 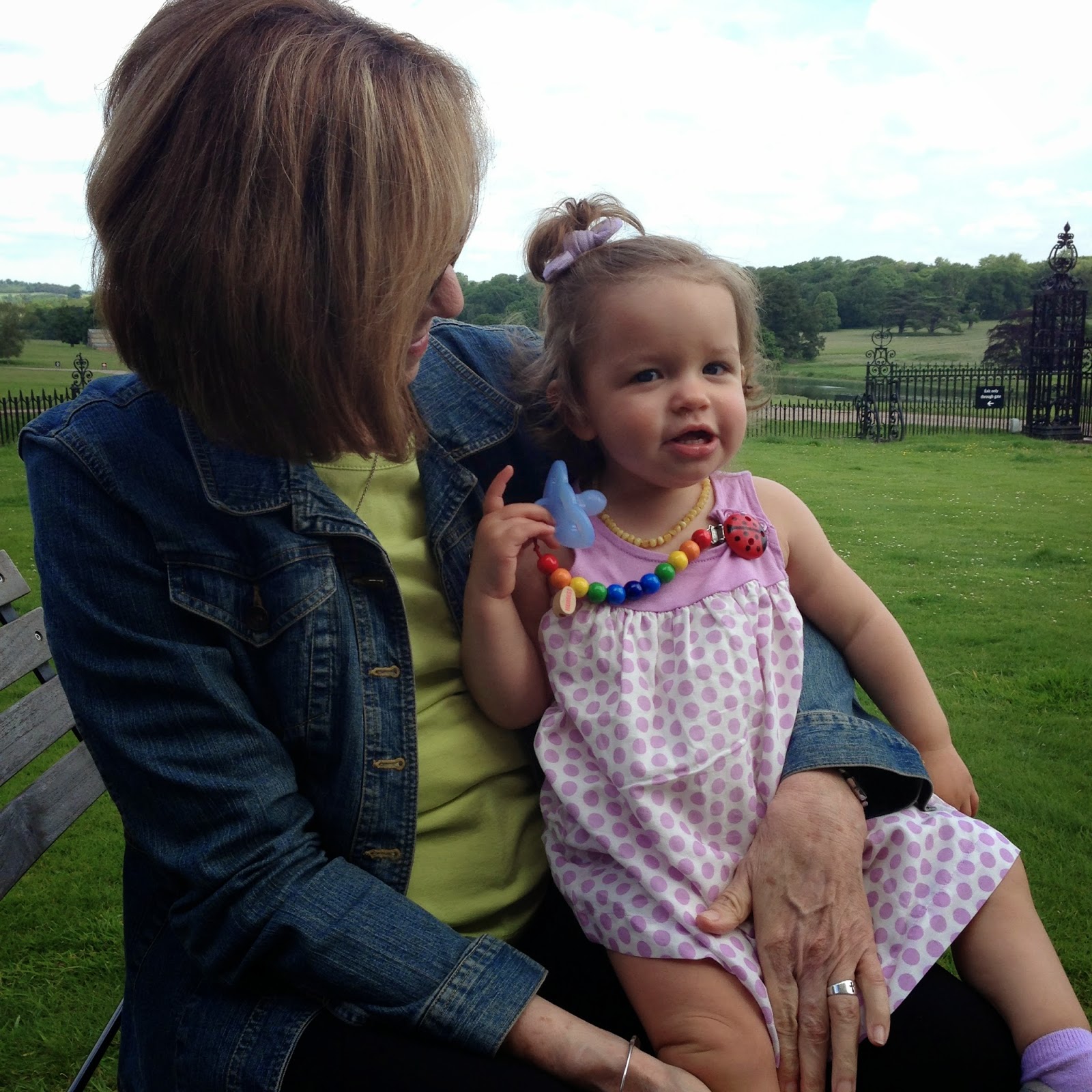 We also took a day to meet up with my friend Caitlin at Kedleston Hall. 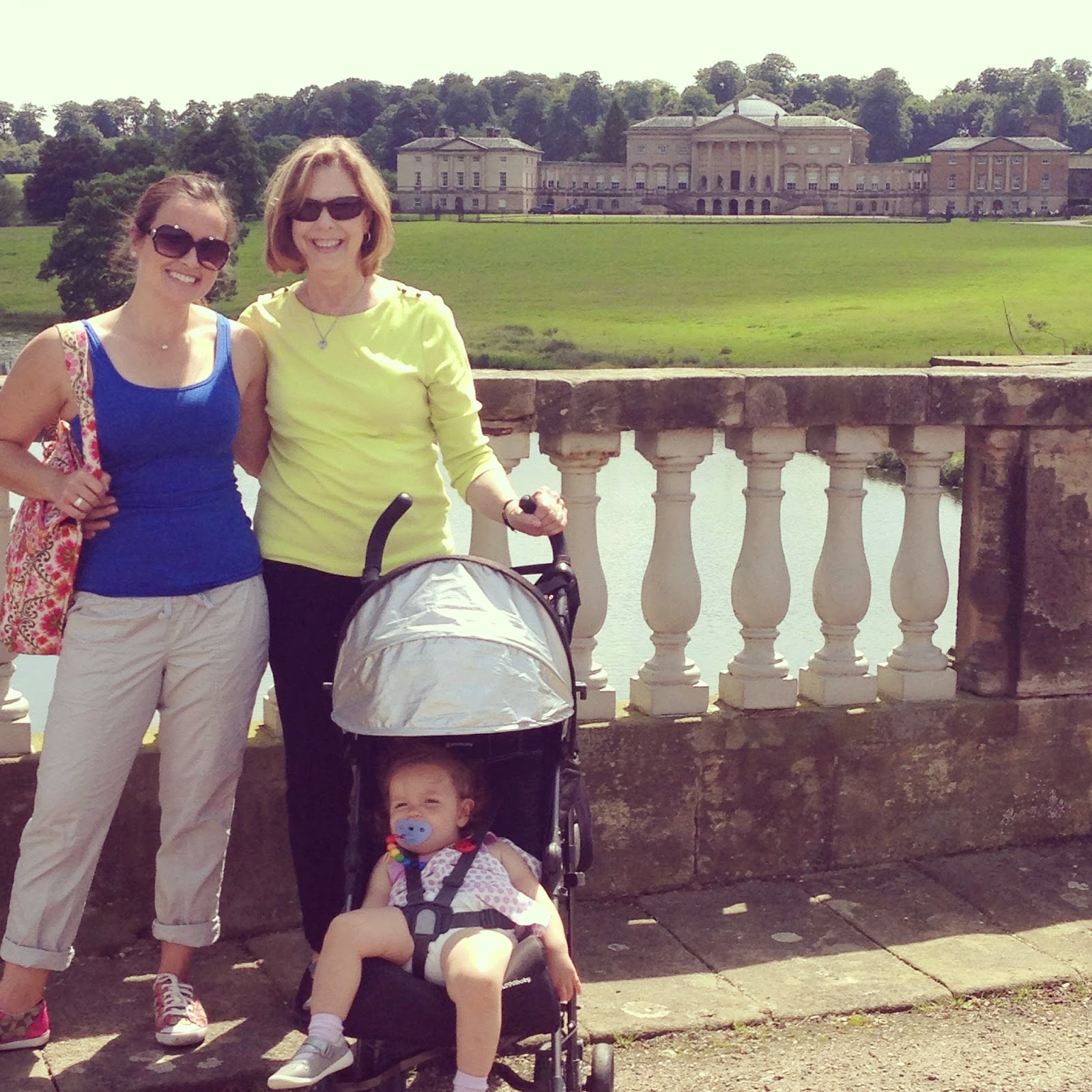 It was a beautiful day!  I really don't know much about this place other then it's a beautiful mansion with gorgeous grounds that you can explore and walk along the trails.  There is even a place to have lunch.  Love these girls!

One more post to wrap up my mom's trip coming soon!