So sorry it took so long to post pictures of where we live, but I've finally gotten around to it. 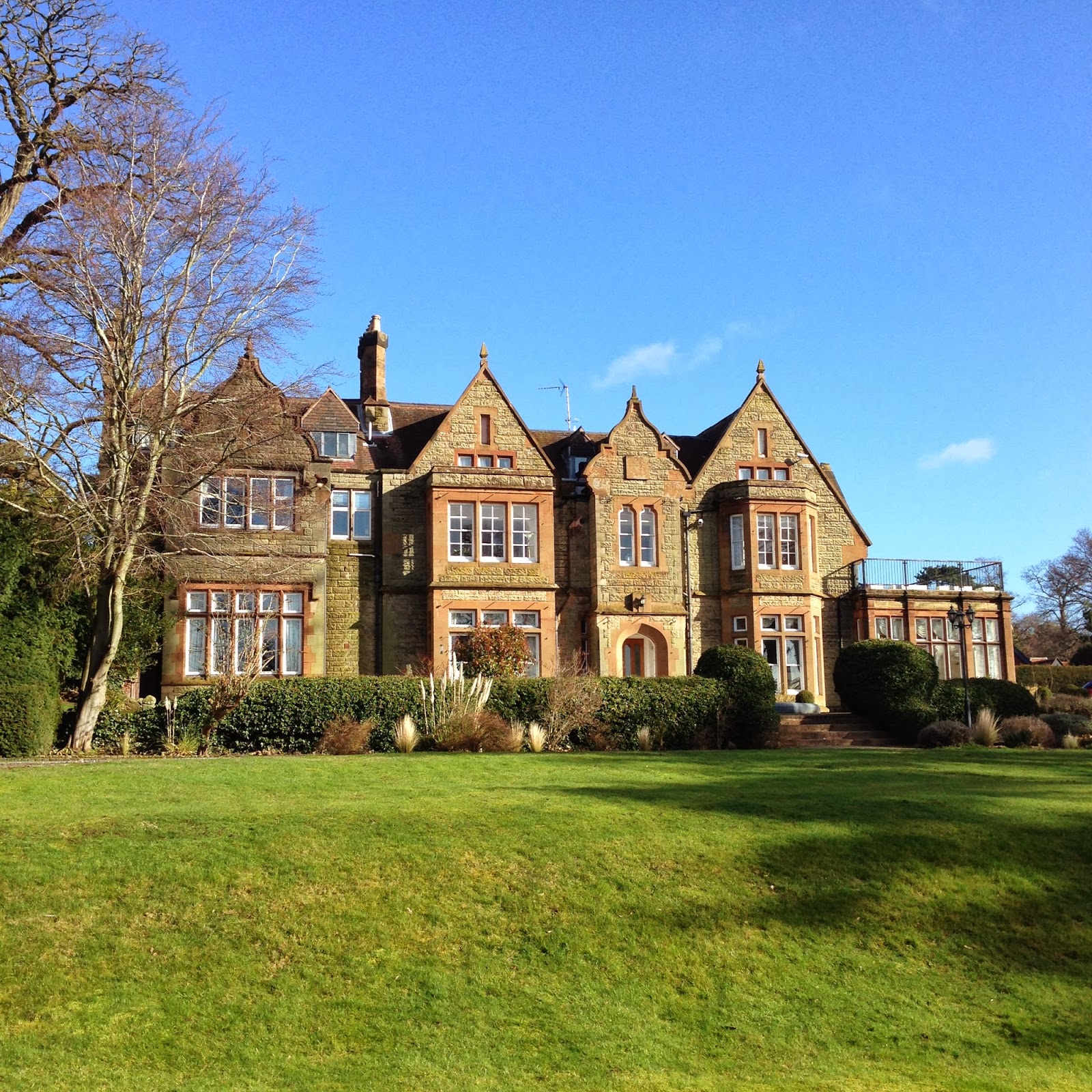 And here it is!  This is all ours!!  Just kidding… ;)
But this is the manor that is on the grounds we live on.  This used to be a single home for a wealthy family back in the day that was converted into a hotel, and then converted into beautiful flats.  Every flat is uniquely different to fit the spaces inside and are completely updated.  There are also several other buildings/houses on the grounds that have names like "The Granary" and "The Beeches".  We live in a free standing house called "The Hayloft"that is directly behind the manor.  We love it here because the grounds are so beautiful, and all the people we've met so far have been so nice. So far we've met people from Mexico City, Uruguay, Romania, and Italy.  We are sort of a melting pot here, and we love that. 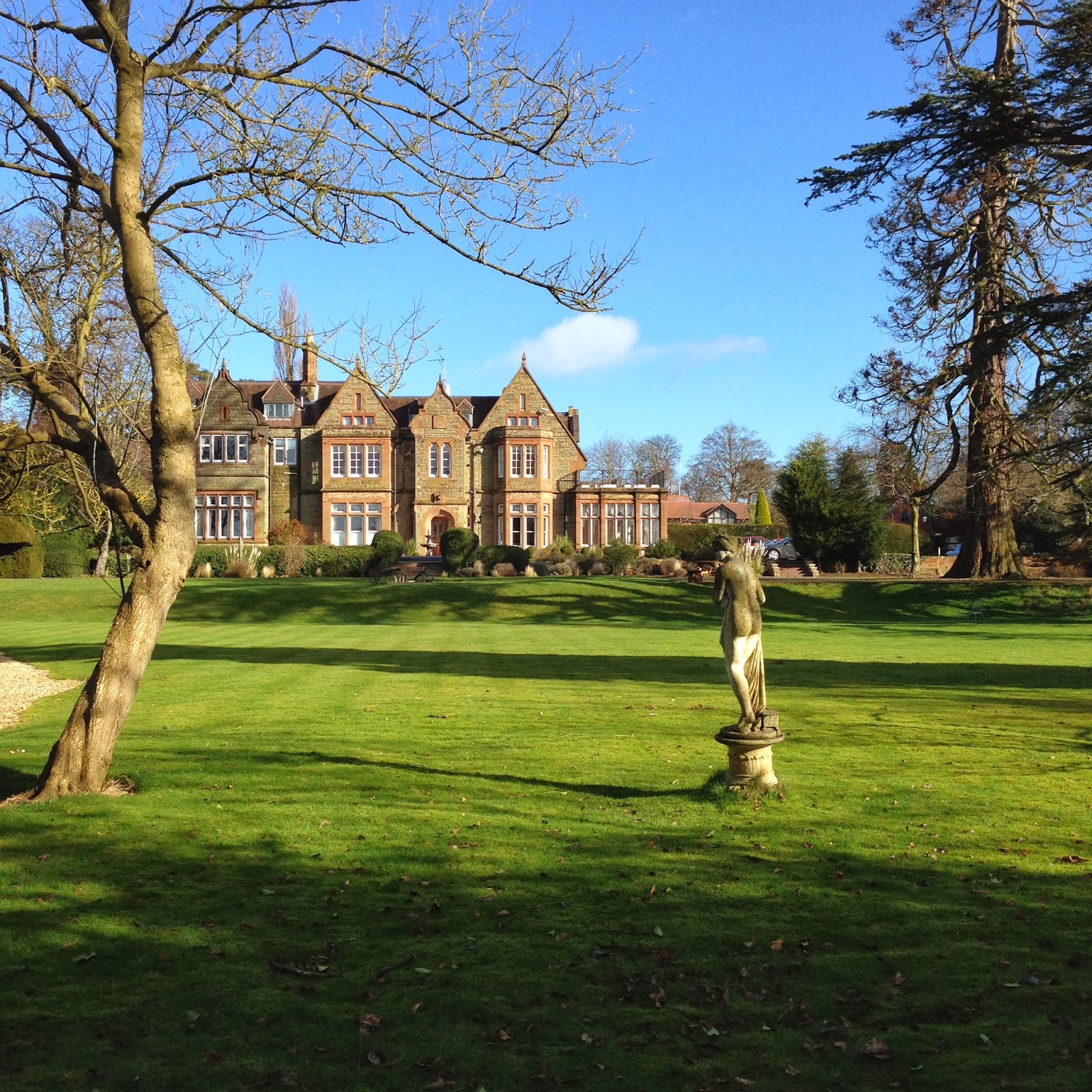 The gardner, named Mic, is the sweetest old man ever!  He does such an amazing job keeping up the grounds, and he's been extremely helpful to us getting acquainted here.  Besides all the beautiful gardens, there is also a separate building that houses a gym we can use, and this whole place is gated. 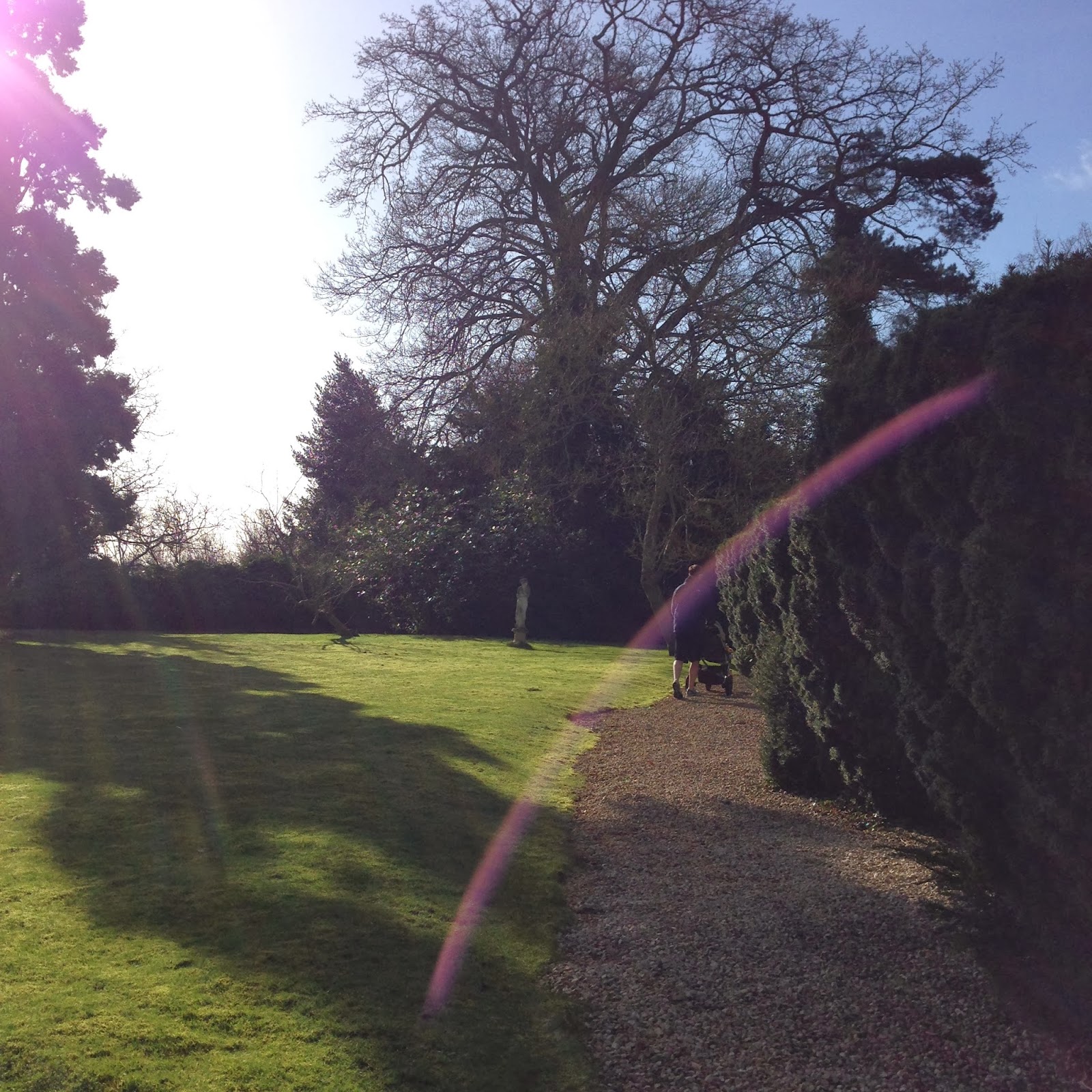 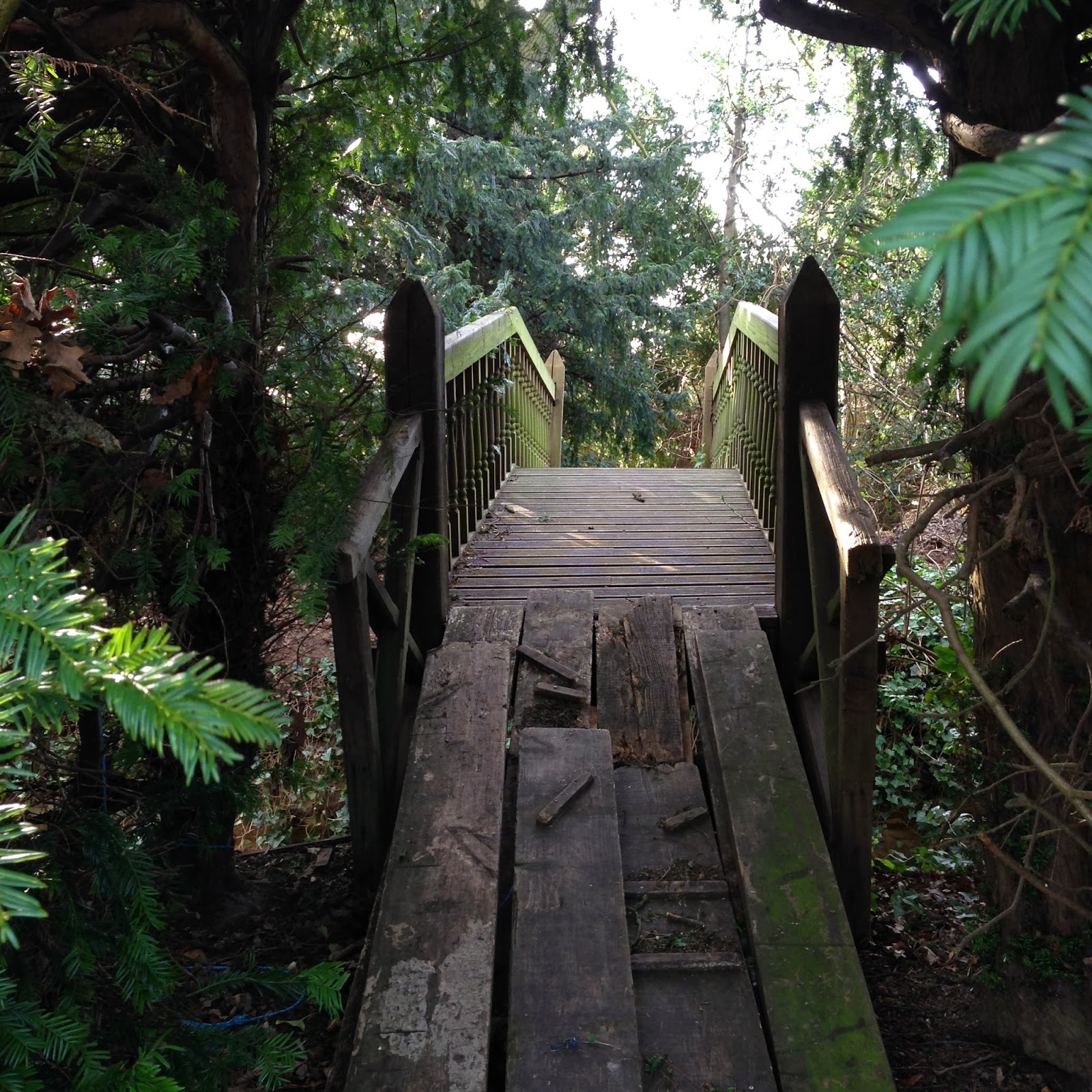 …and secret hiding places (they are fixing this bridge).  It is every child's dream! 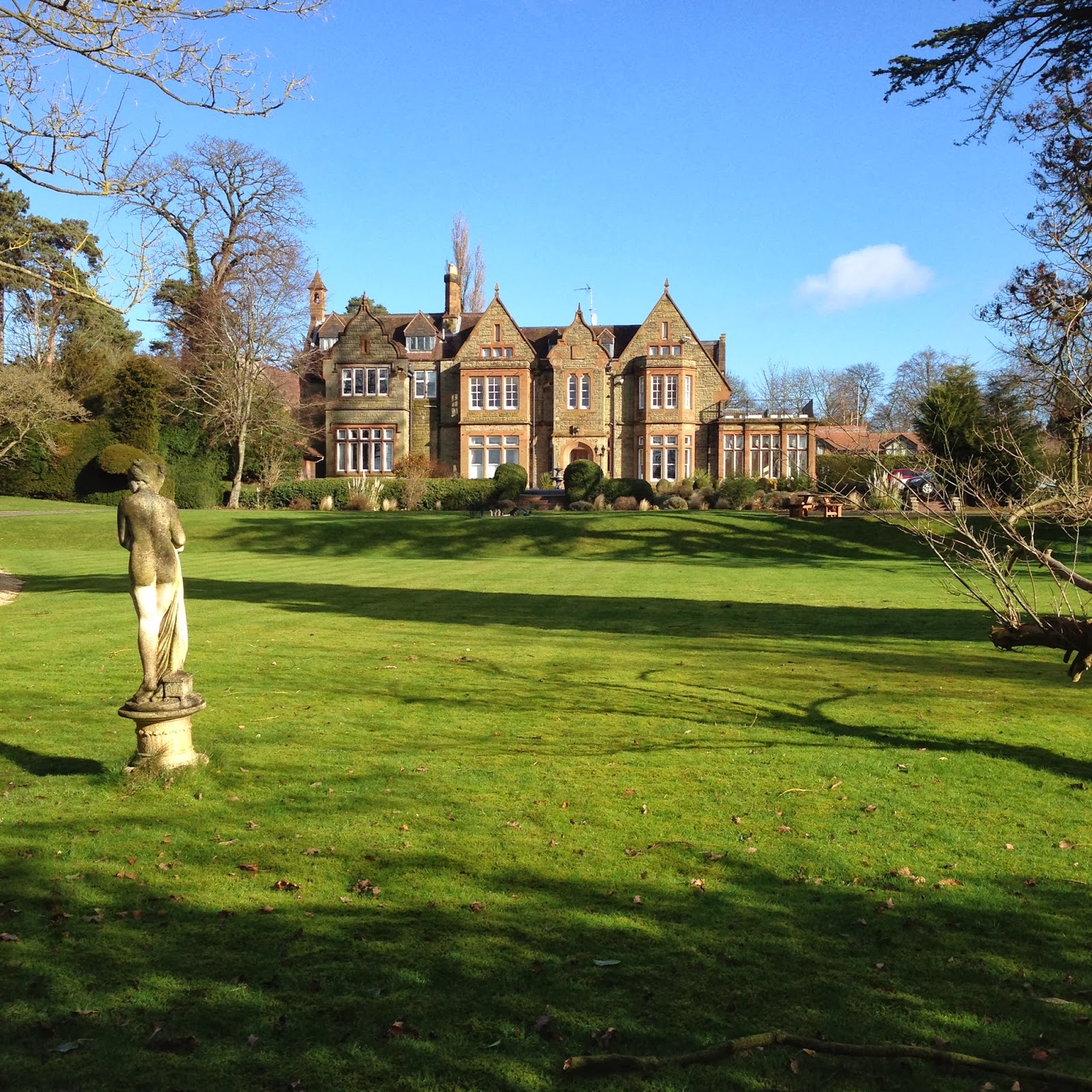 There are also benches, picnic tables, chairs, fountains and even a life size chess game to play.  It feels like we are on vacation! 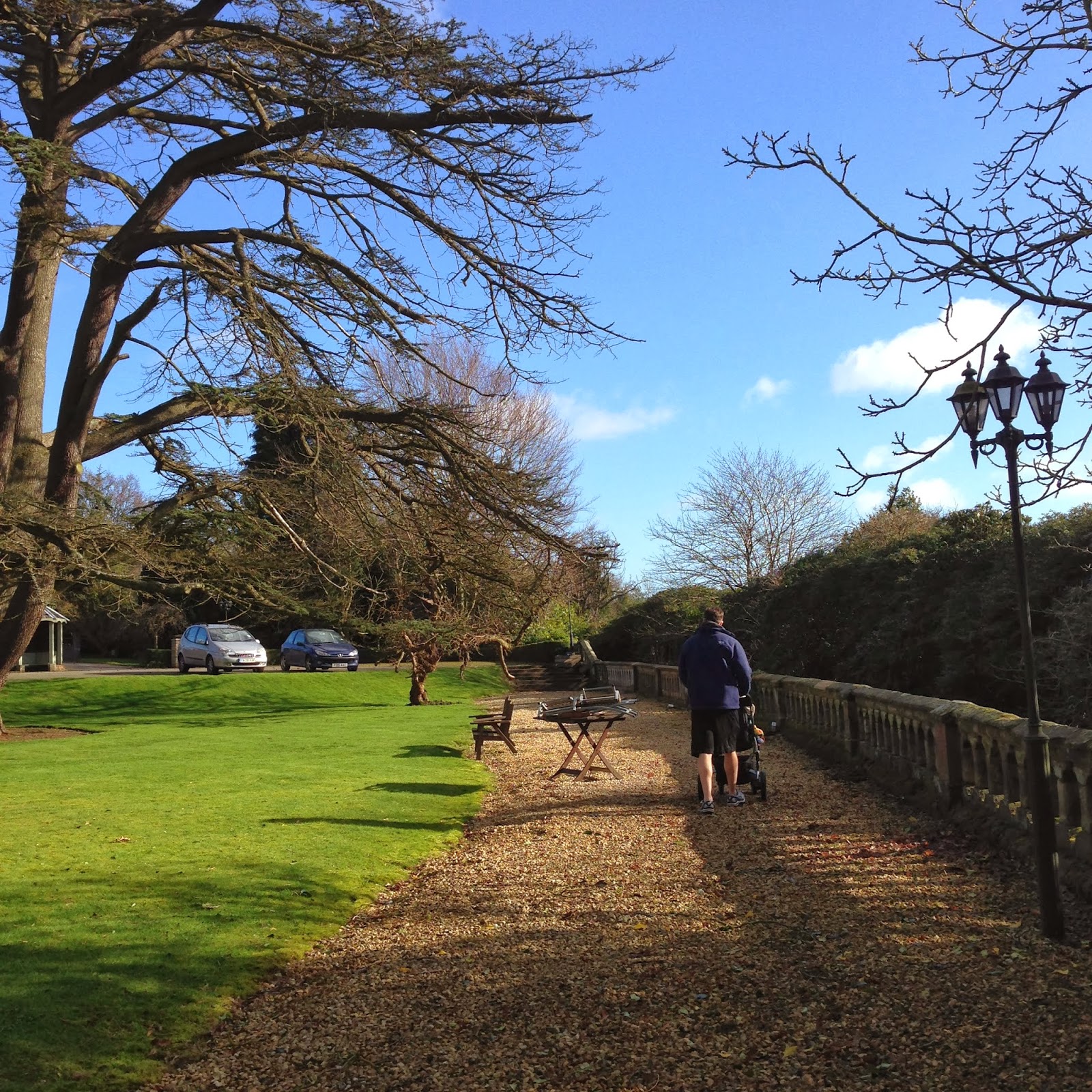 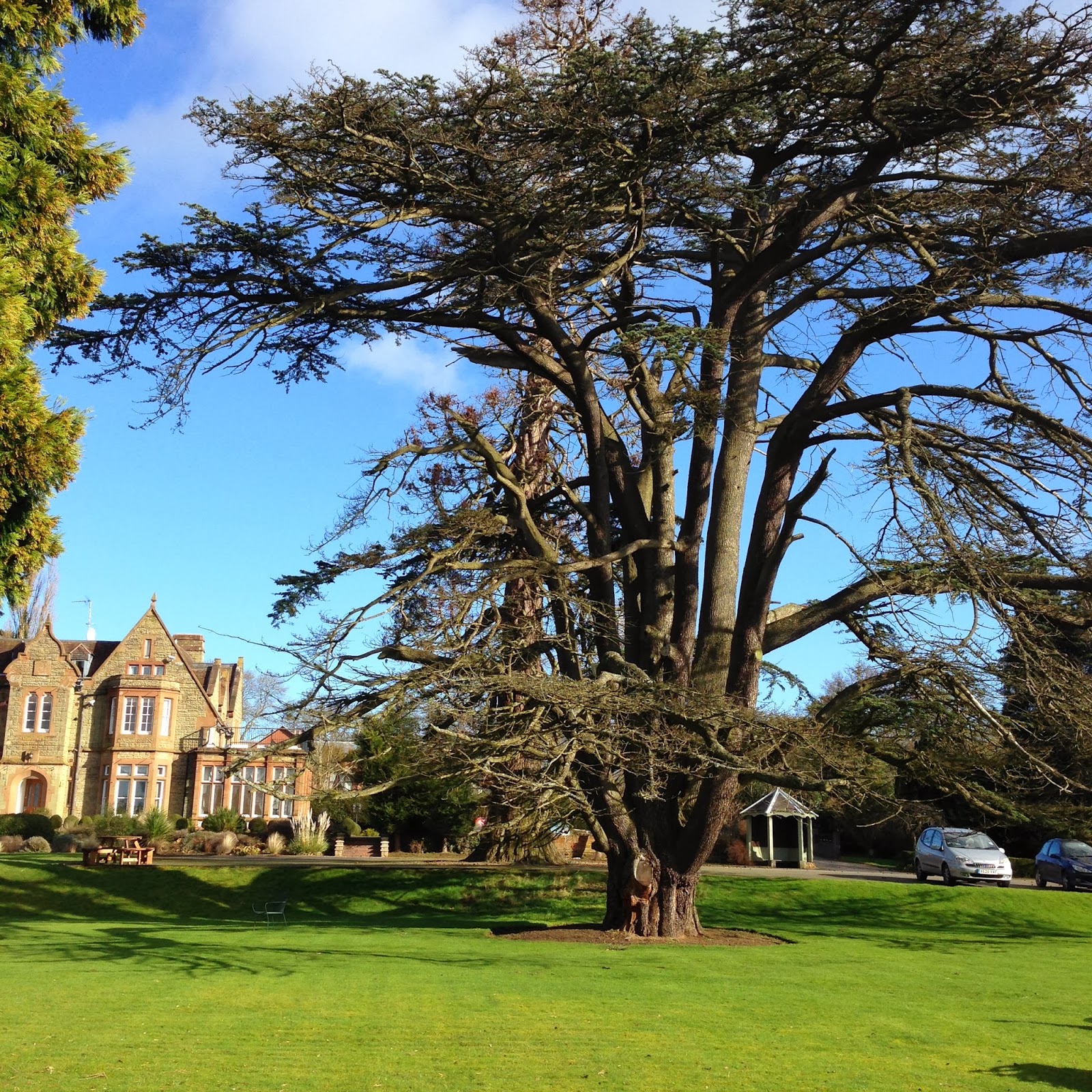 Ryan is dying to climb this tree. 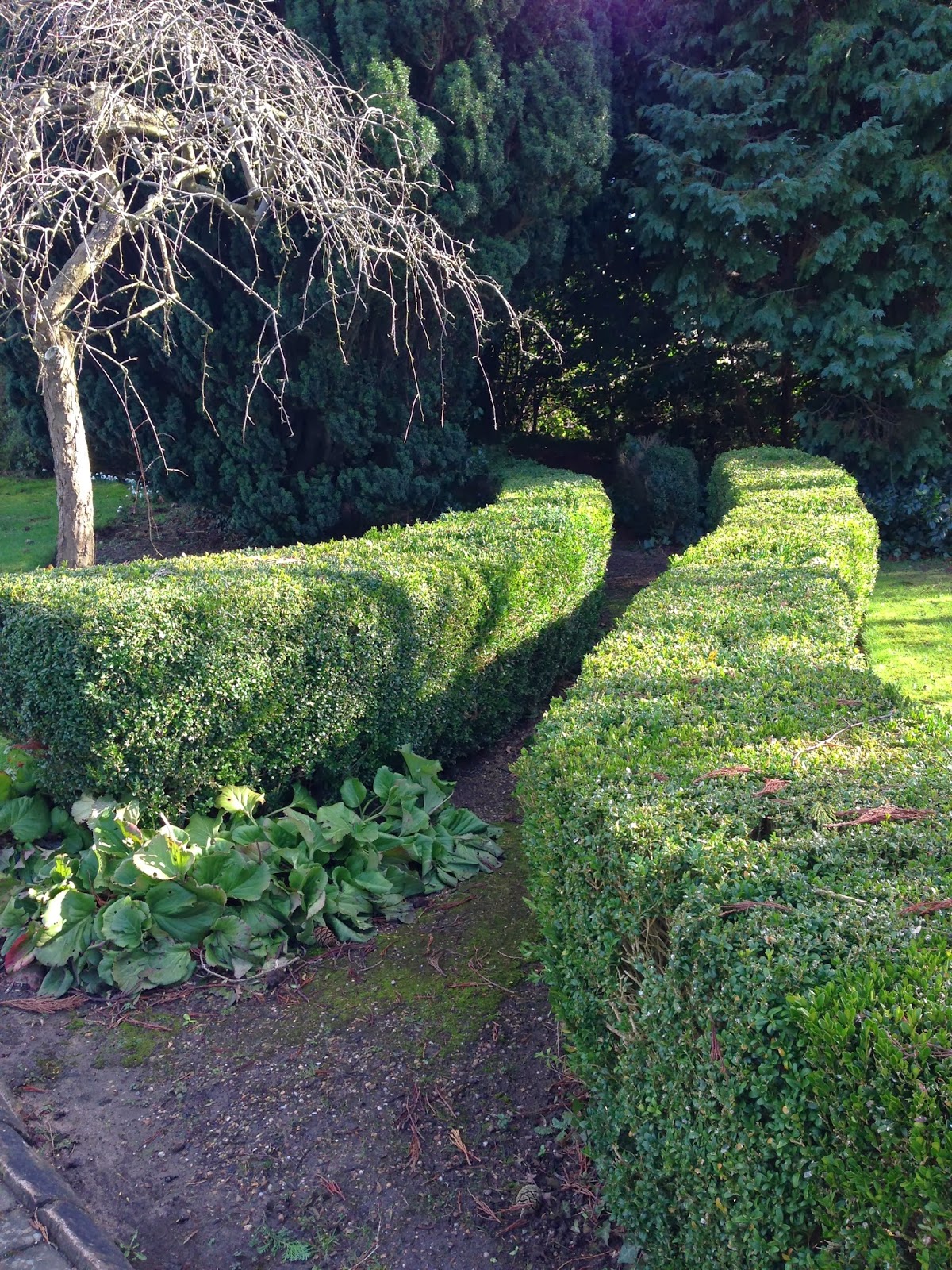 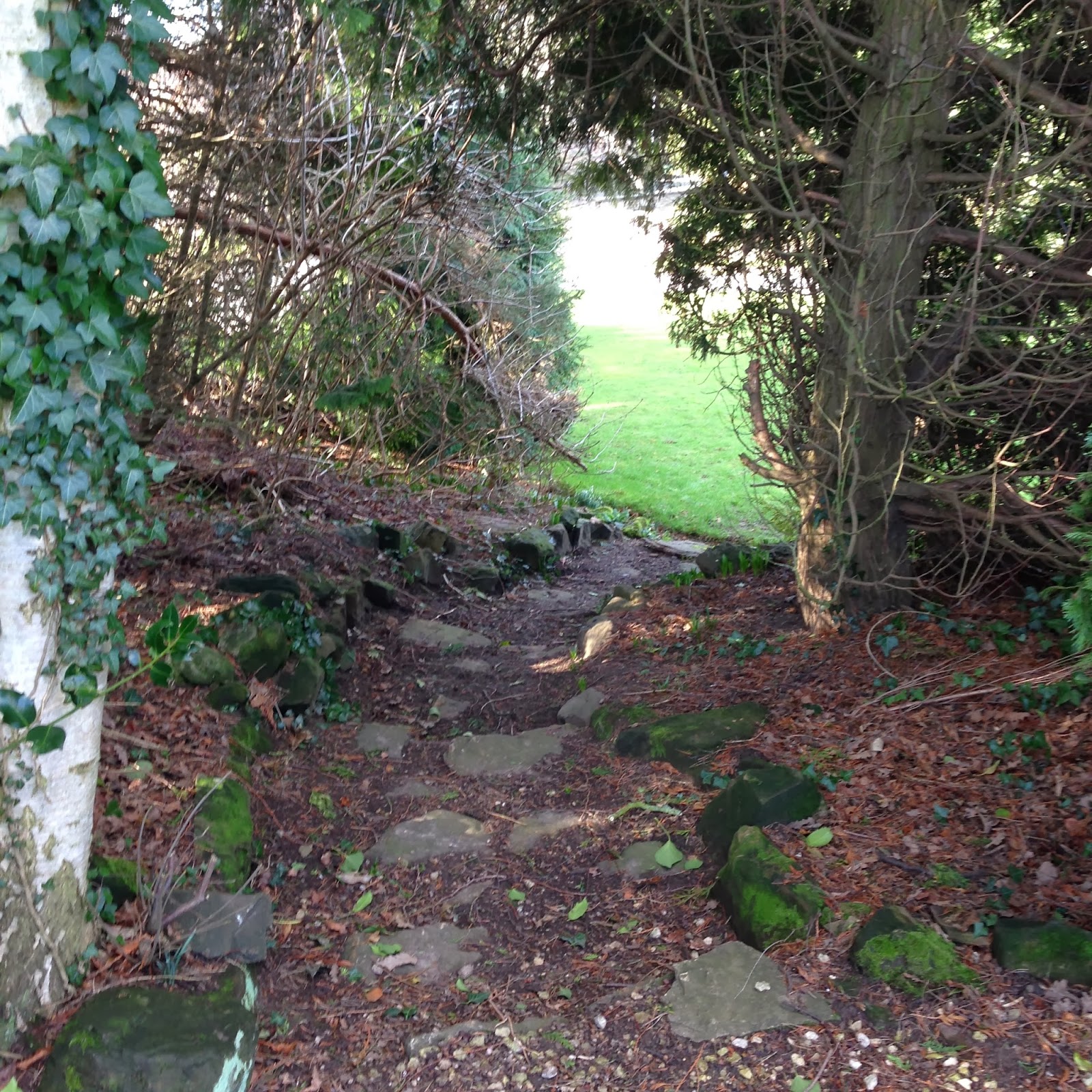 I can't wait to see this place in full bloom this summer. 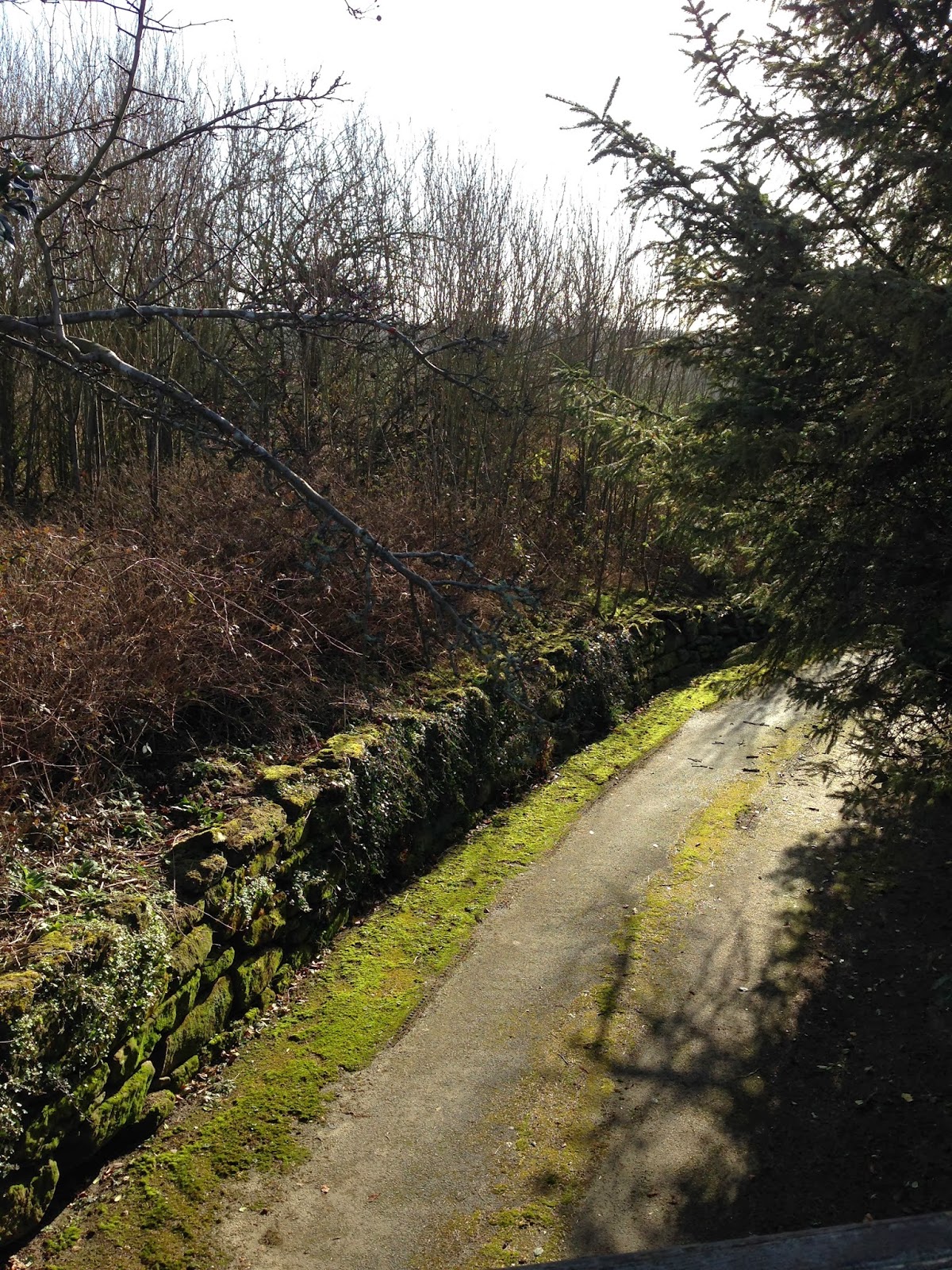 This is the drive in to our house.

Here's a video that I quickly snapped while driving to our house.  Sorry it's so bumpy! 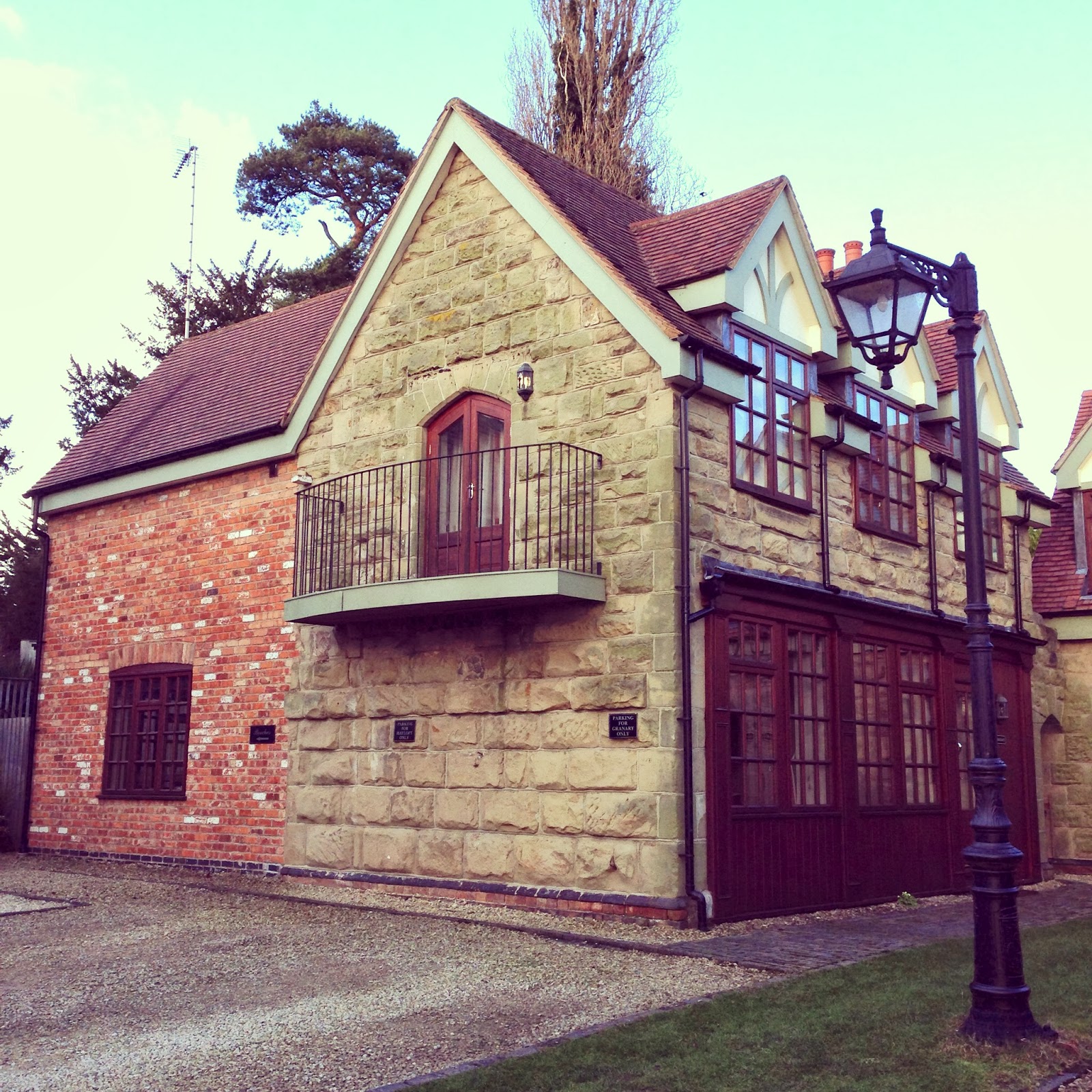 I've showed these before but this is our house, "The Hayloft". "The Granary" house is right next door (out of shot).

Unfortunately, last week while I was home with Maggie I started to smell fire.  It didn't concern me at first because the gardner will sometimes burn wood out back.  Then is got stronger, and I heard a loud bang which I thought sounded like a firework going off.  That's what prompted me to look out our windows, and that is when I saw this. 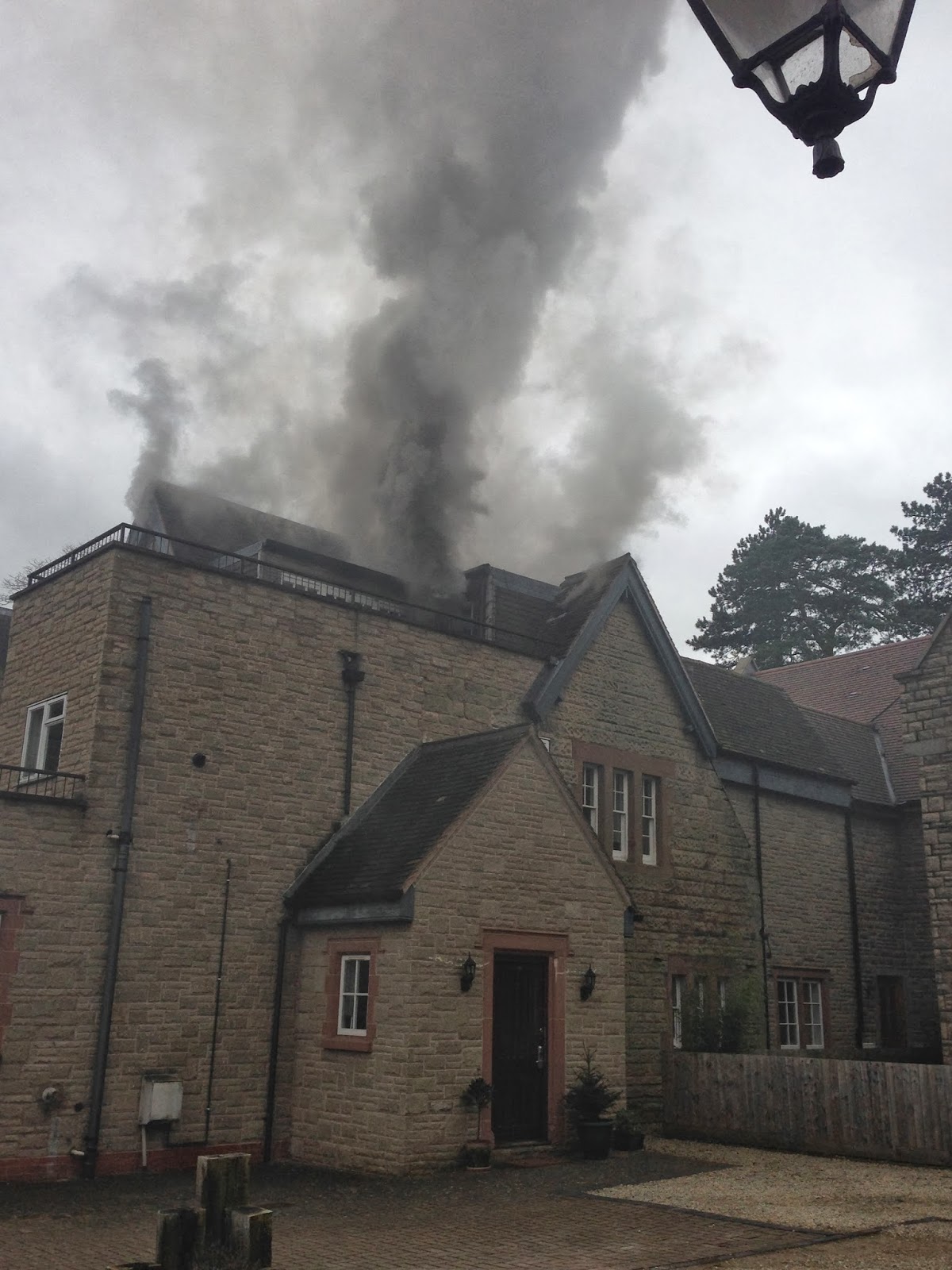 Right across from our house, the manor was on fire!  Just about that time I saw some residents coming out of the manor to see what was going on.  Some workers that happened to be there ran off to call the fire department. 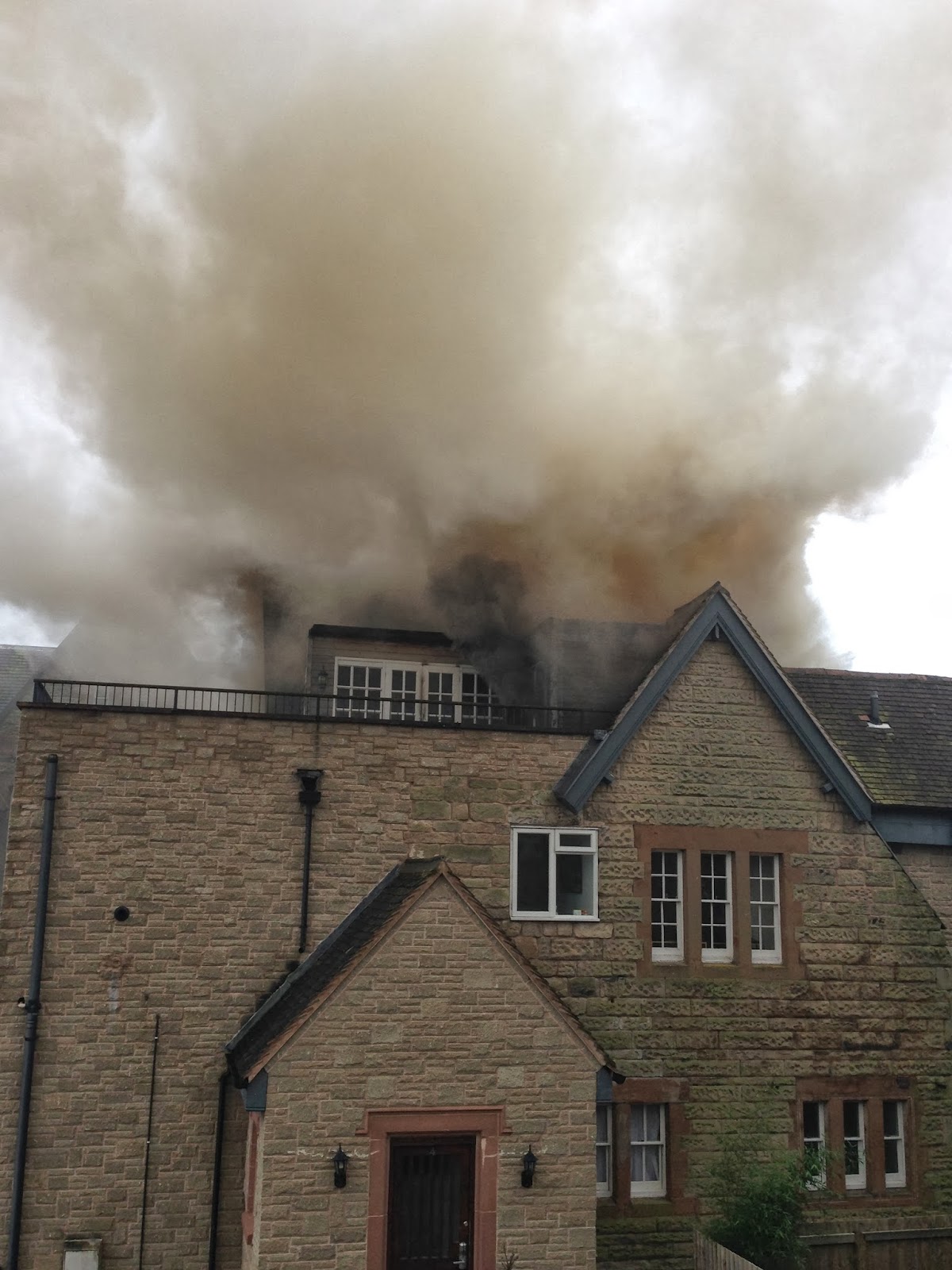 It just started spreading so quickly! 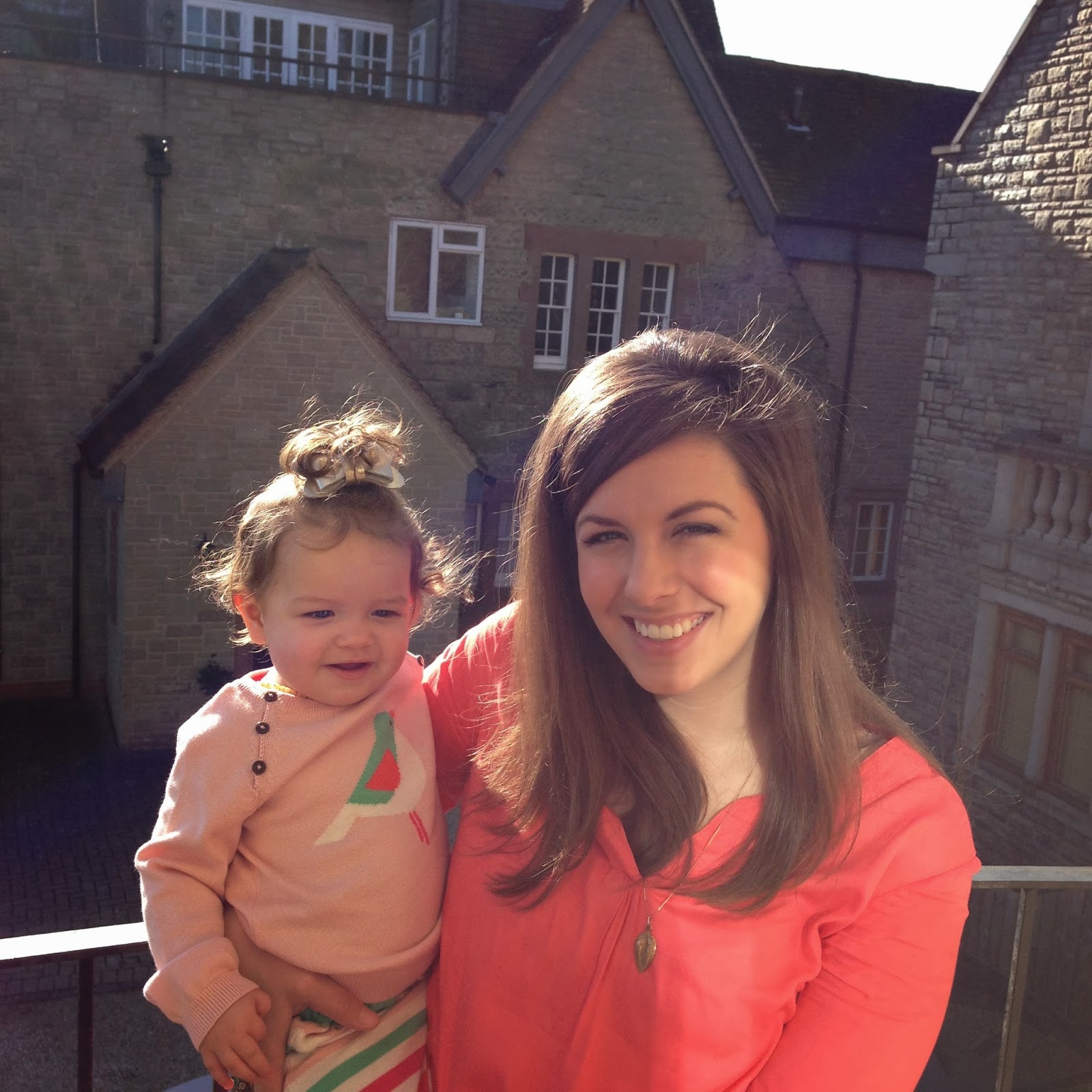 Just a few days earlier, we had taken pictures from our master bedroom balcony that points to the exact same spot.  So you can see how close it was. 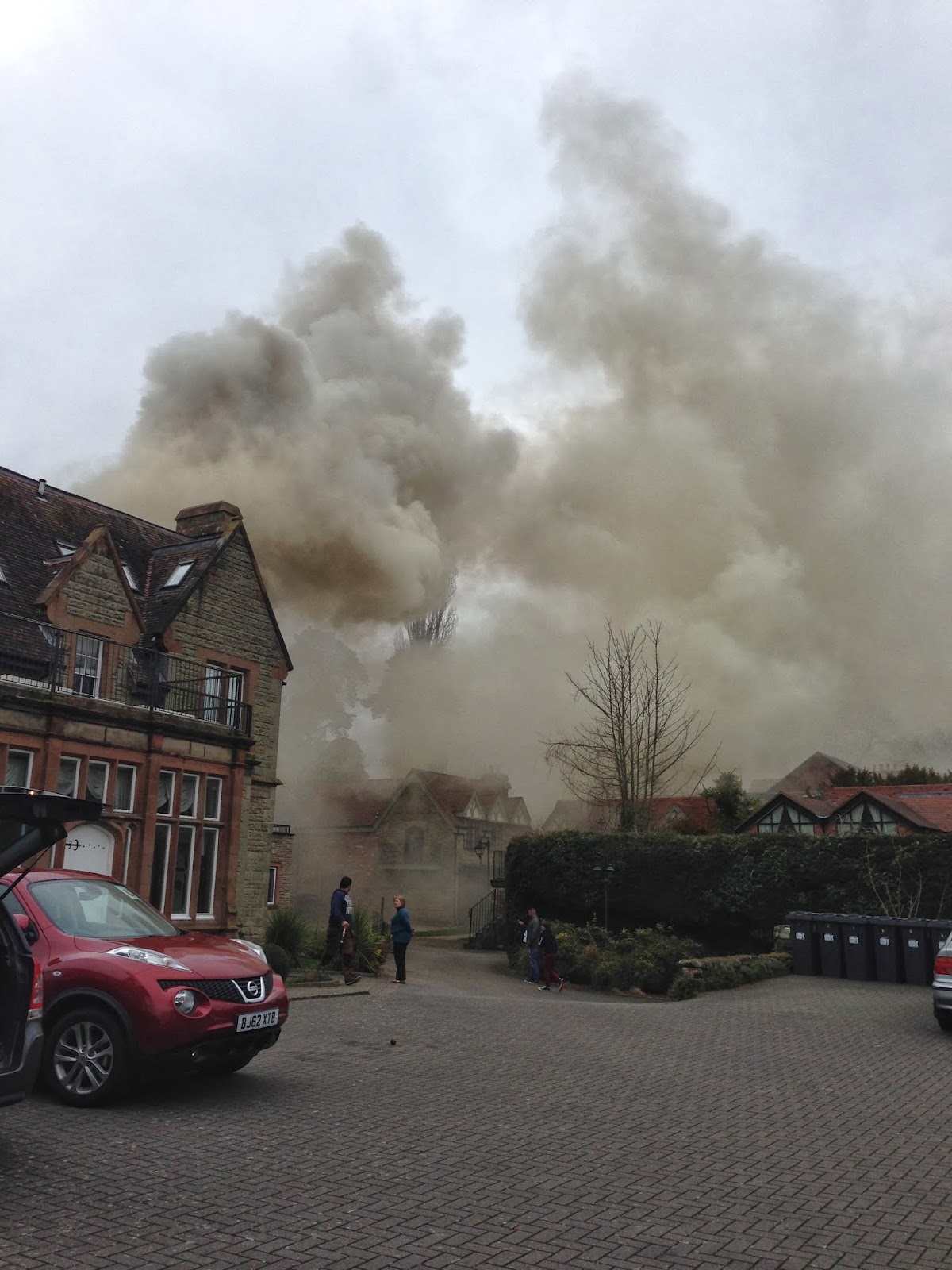 About that time was when I realized that the fire wasn't going to be easily put out.  So I grabbed a few things and put Maggie in the car to get out of the way of the smoke since the wind was blowing it right at us.  That is our house in the middle just to the right of the manor. 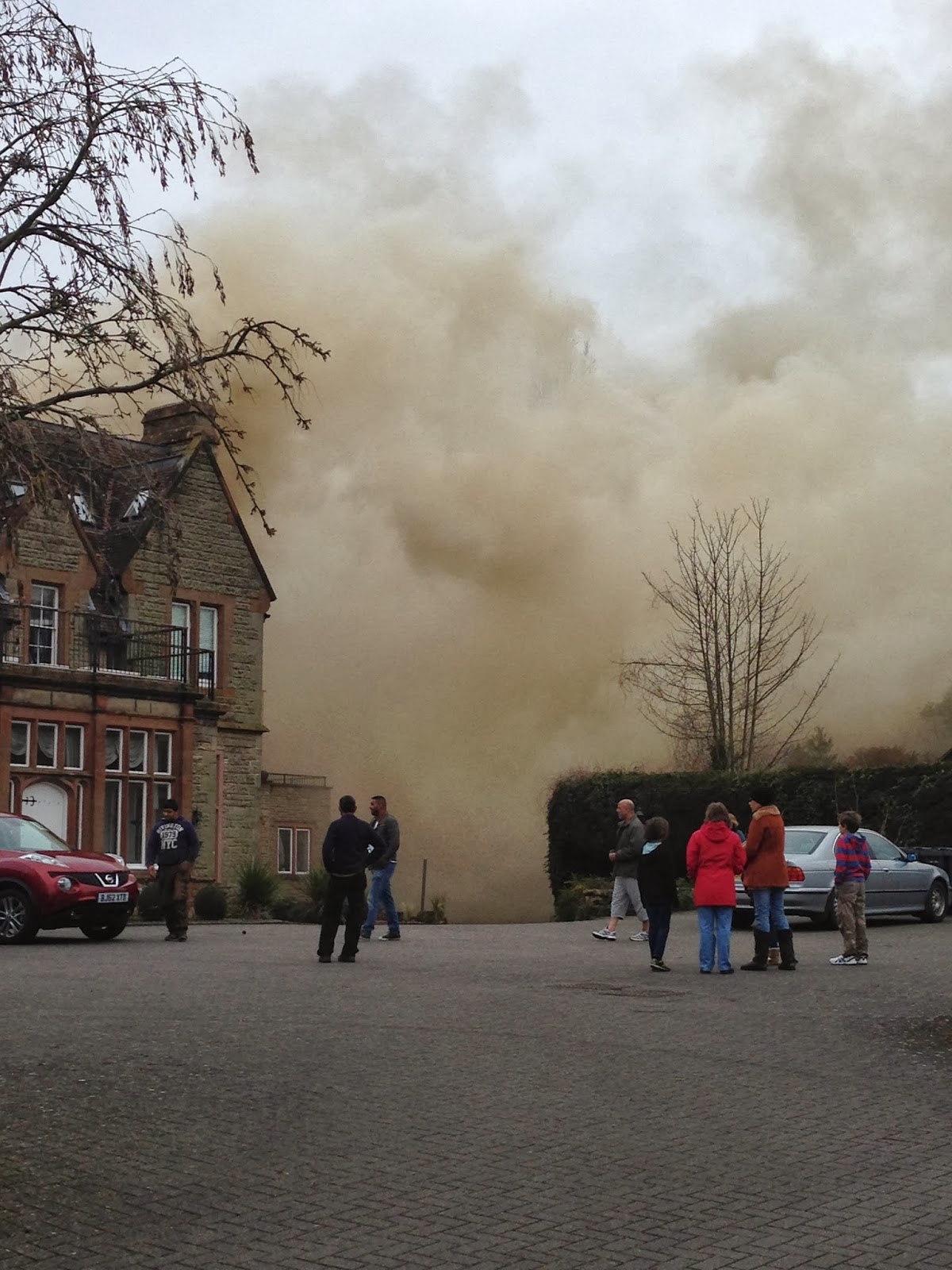 The fire spread so fast.  You can't even see our place now. 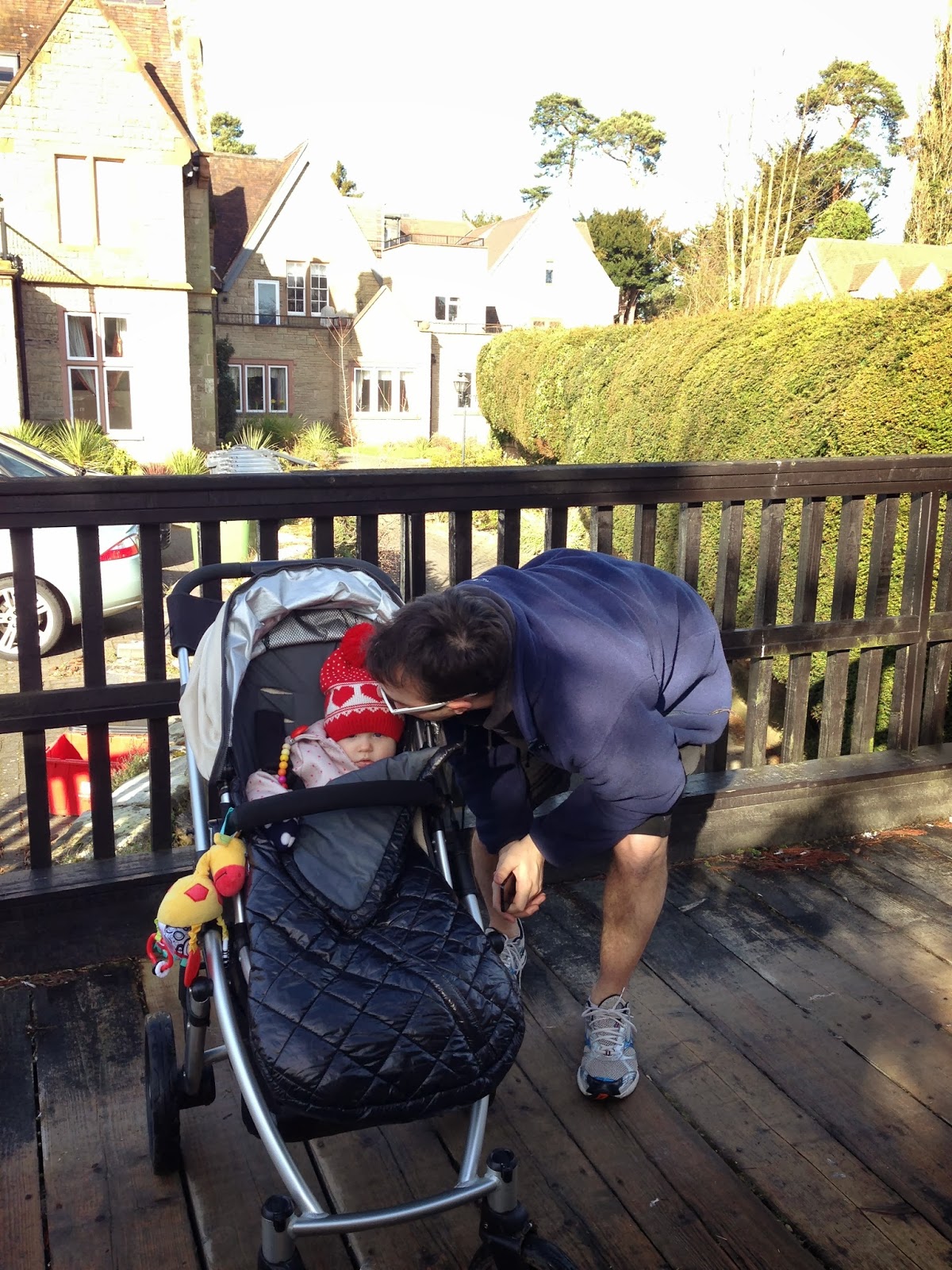 Here's a picture we took just a few days before from a bridge on the grounds pointing at the place where the fire started.  Our house is to the right. 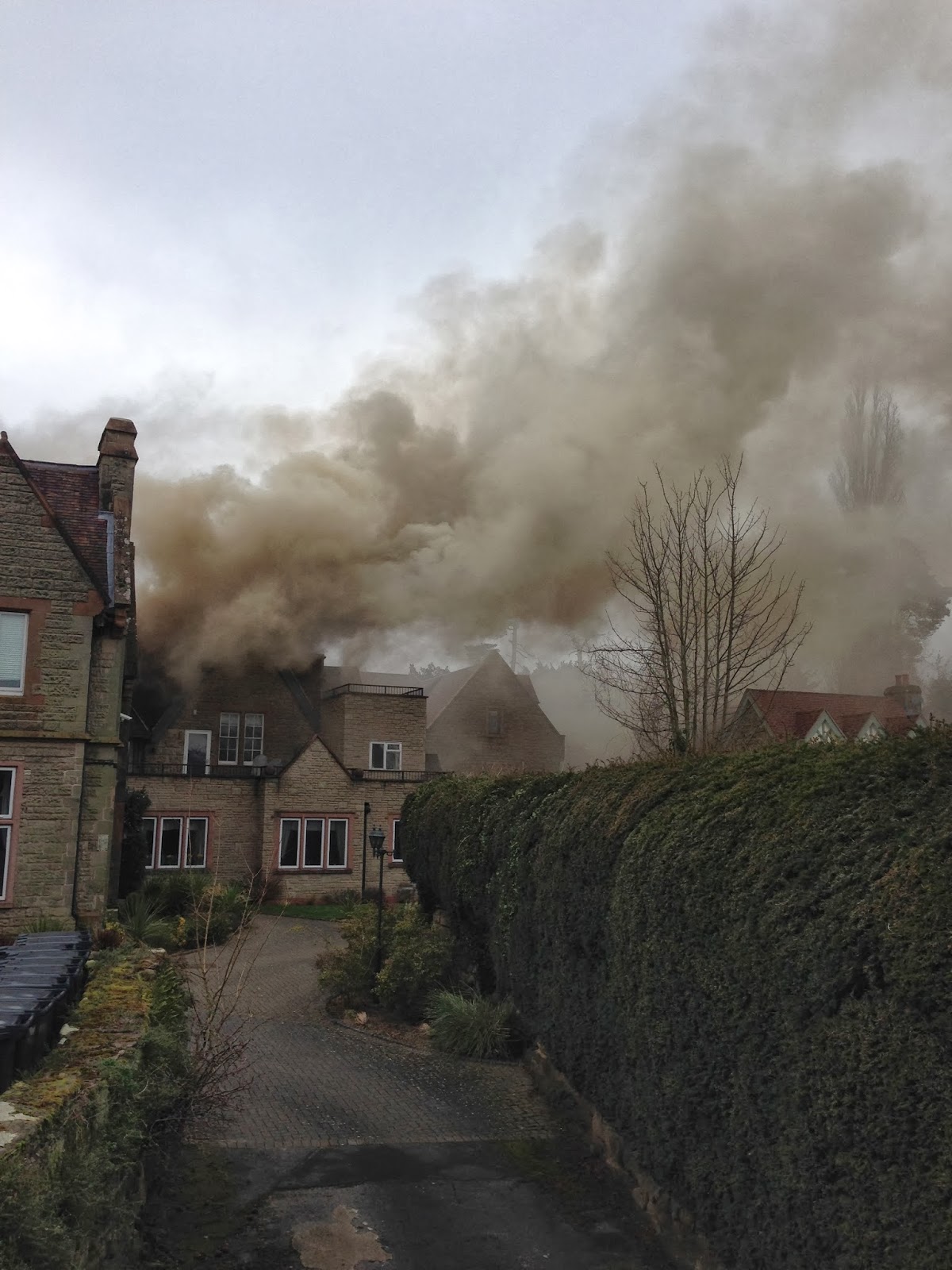 Same spot with the fire going.  It was definitely scary.  Since Maggie was sick with an upper respiratory infection we left pretty quickly and headed over to our friend's house.  Thank the Lord we had them because Ryan was in London for work!! 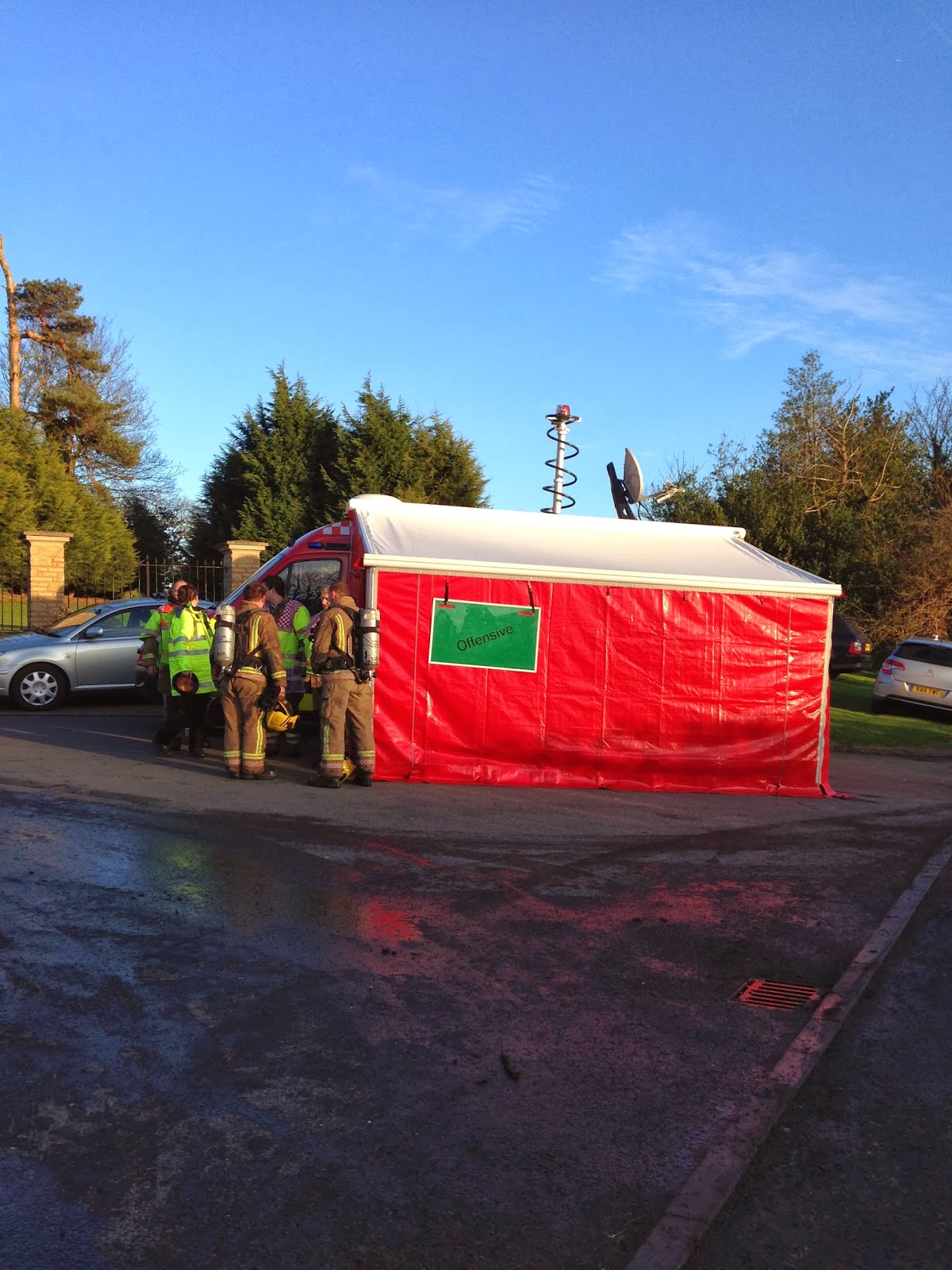 Later that day I went back to collect a few more things because I realized that we would not be able to sleep there that night.  When I got there, there were firetrucks as far as the eye could see and every road leading here was blocked off.  12 fire stations and 50 firefighters where called here to put out the blaze. They setup a relief center for the residents at a local high school near by. 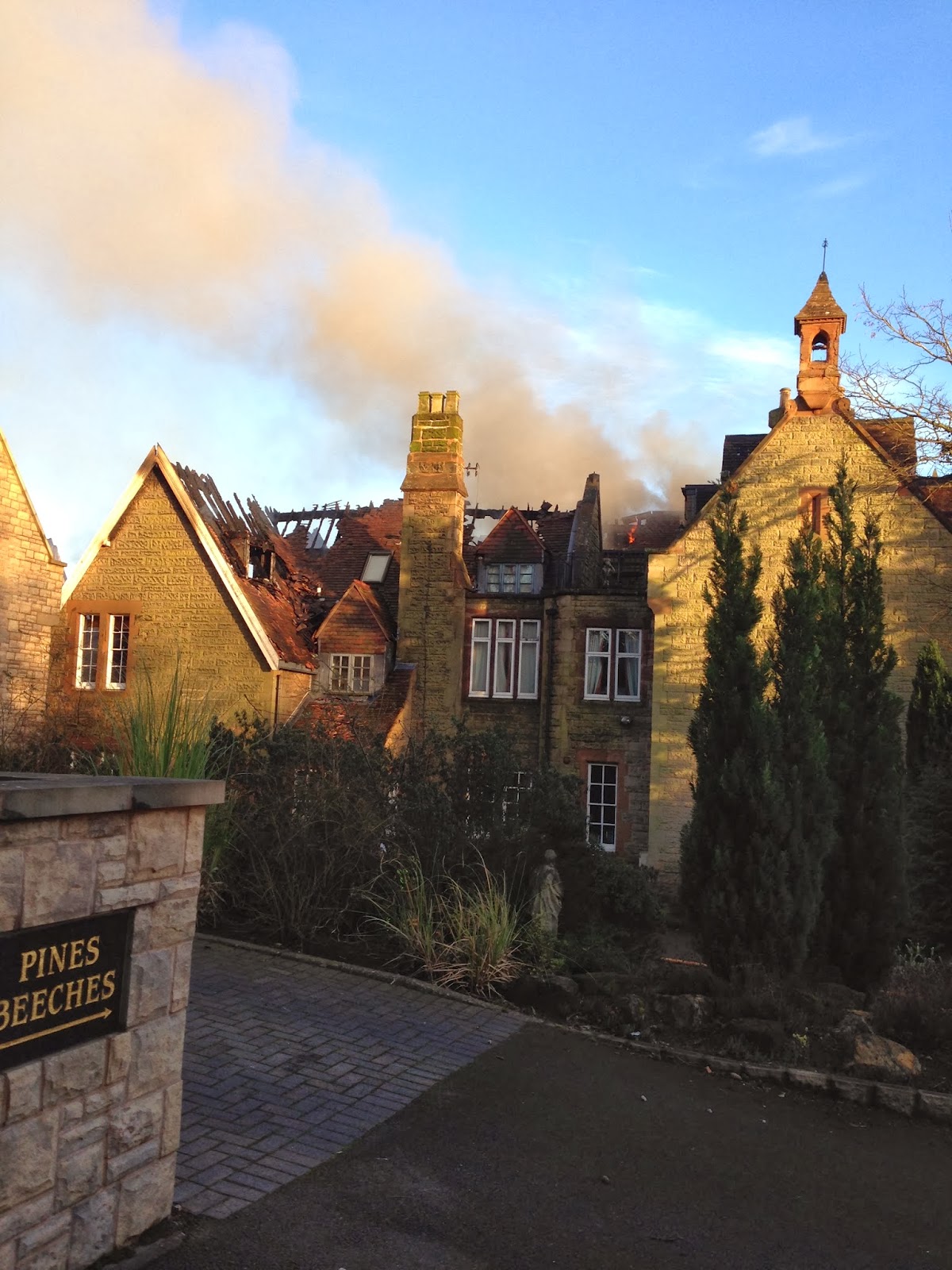 The fire was still going but contained enough that a firefighter was able to take me back to my house to get a few things for Maggie.  This is a side view of the manor. 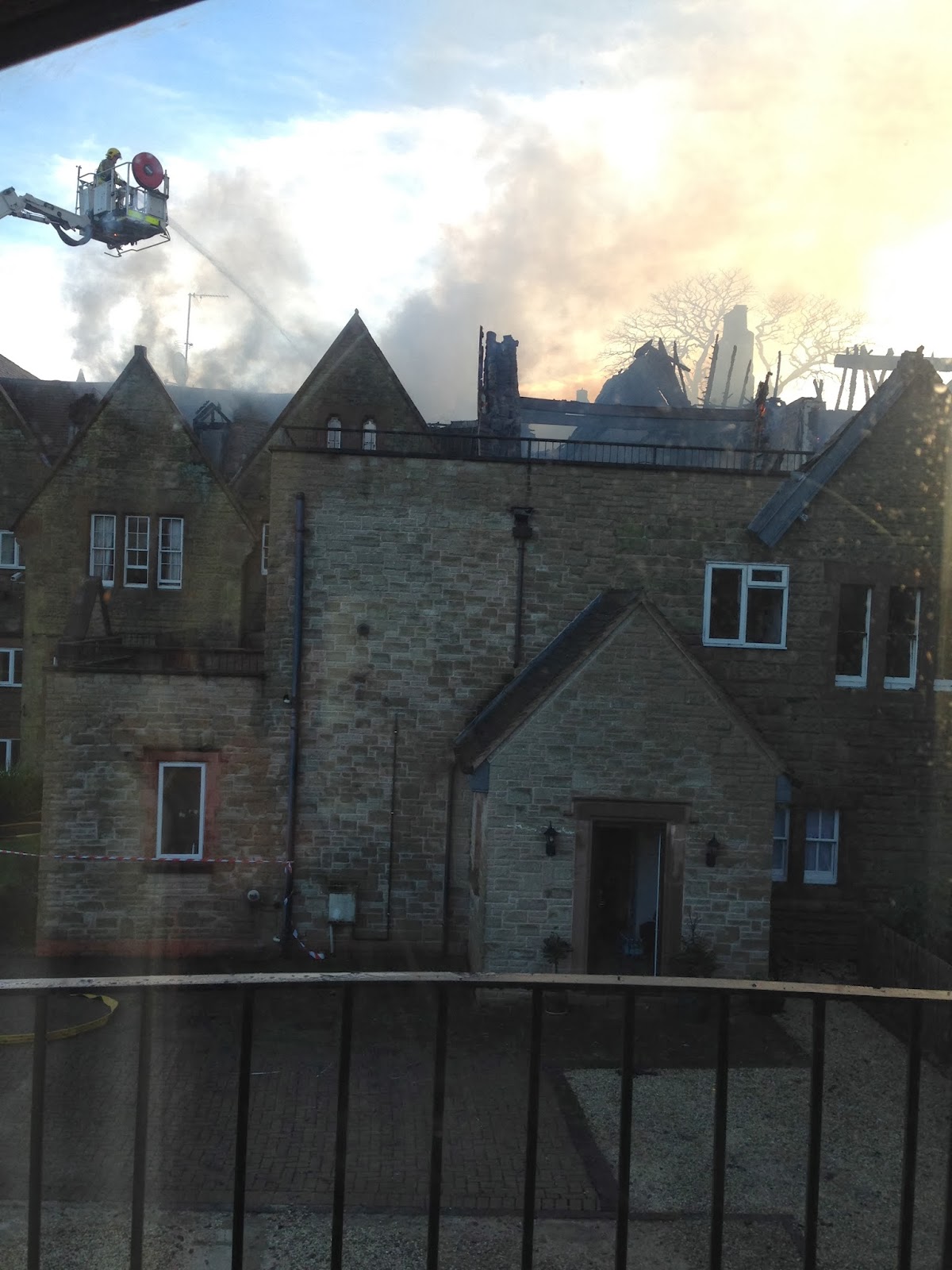 View from our balcony.  The fire was so big that it destroyed 40% of this building and made the BBC News, link here.  I was interviewed by two fire investigators and interviewed by a radio station, link here.  They still don't know what started the fire but they are speculating it had something to do with the electrical wires.  Everyone in the manor had to move out and the only people left on the grounds are the people living in the free standing houses.  We were lucky because we just had a little bit of smoke in the house that was easily aired out, and had no damage.  The Lord was definitely looking out for us.  We were able to go back to our house the next day in the afternoon when the final firetruck left.

Arial shots of the damage taken from this site here. 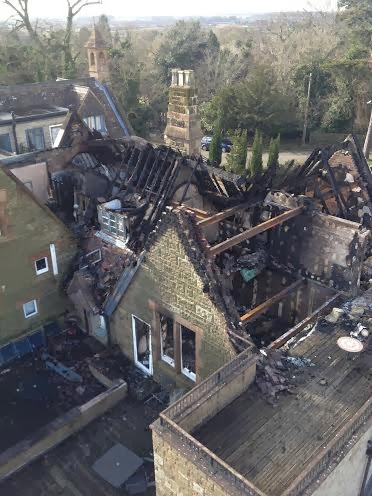 Arial shots of the damage taken from this site here. 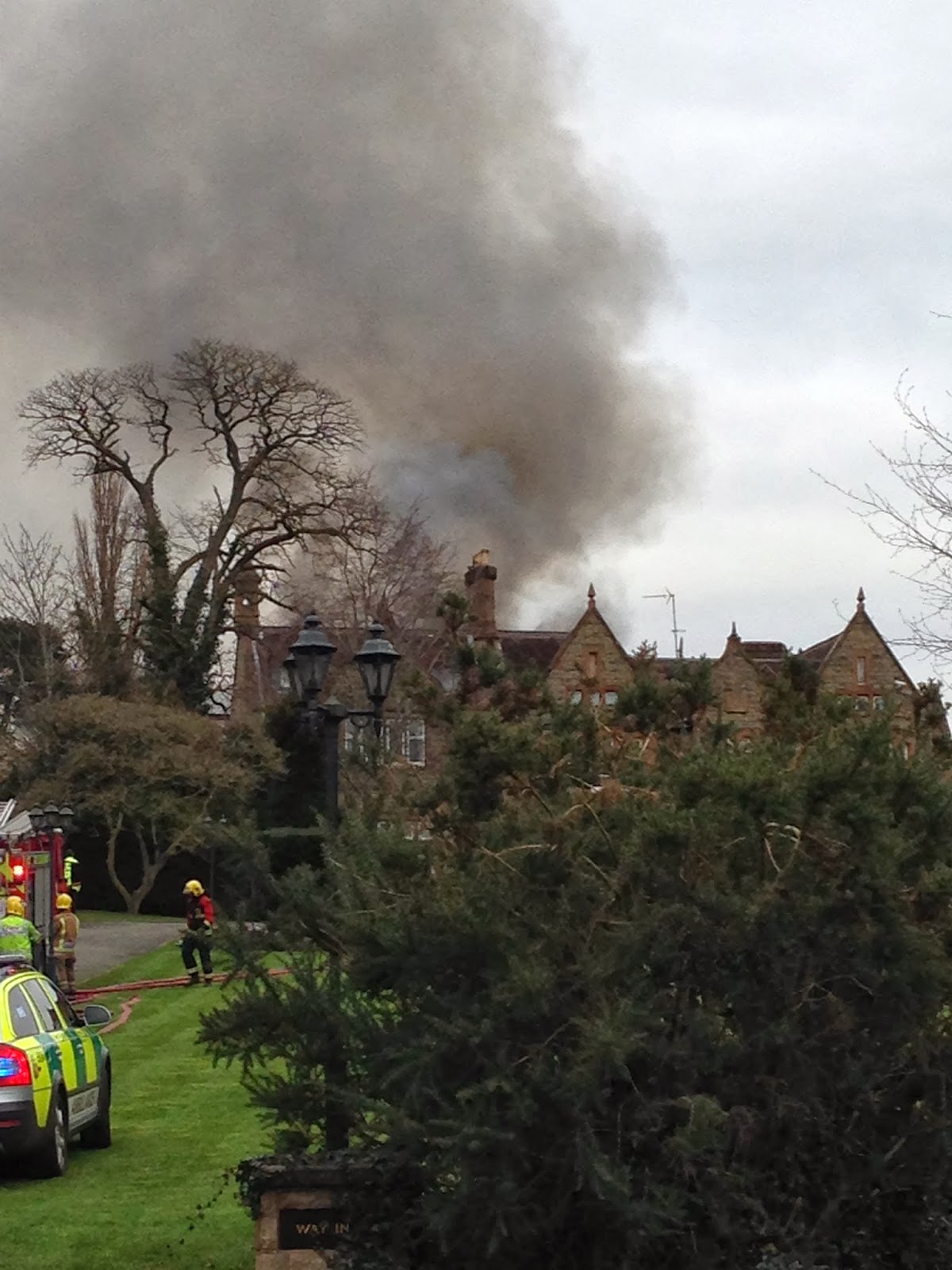 It's crazy because from the front you can hardly tell anything happened here because most of the damage is in the back.

It will probably take at least a year before anyone can move back in and at least 2 years until it is all repaired.  Very sad that this happened but luckily no residents were hurt.  There was one firefighter that had to be taken to the hospital but he is doing fine now.