Side note: Before I get into this post I just wanted to say I'm so overwhelmed!  Ha! I really don't know how stay-at-home mommies get everything done and blog.  I'd love to know from blogging moms out there how they do it.  I'm definitely the first to admit that I do not have everything together.  7 days out of the week my house looks like a disaster and there is always laundry to be done.  Lets not even get into finding time to workout!  I'd love any advice.  :)  I'd really like to continue blogging, especially because I know how much this will mean to me (and hopefully one day her) to have Maggie's childhood documented.

I'm almost a month behind on posting this but we took Maggie on her first official plane ride and vacation to Denver, CO. 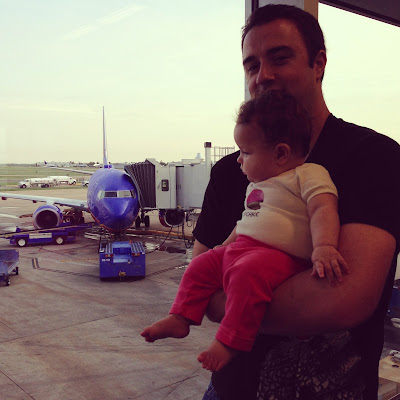 I read all the blogs on how to successfully fly with a baby to be super prepared for our flight.  I tried to time it so that her nap would fall at the same time we would be flying.  That way she would just sleep right through the flight.  HA! 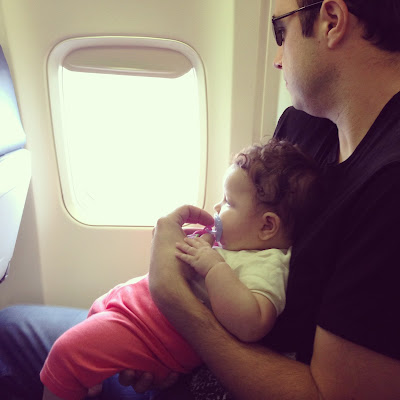 No such luck, I didn't really take into account the loud overhead announcements from the crew.  Plus the fact that our daughter is now becoming a lot more spatially aware. 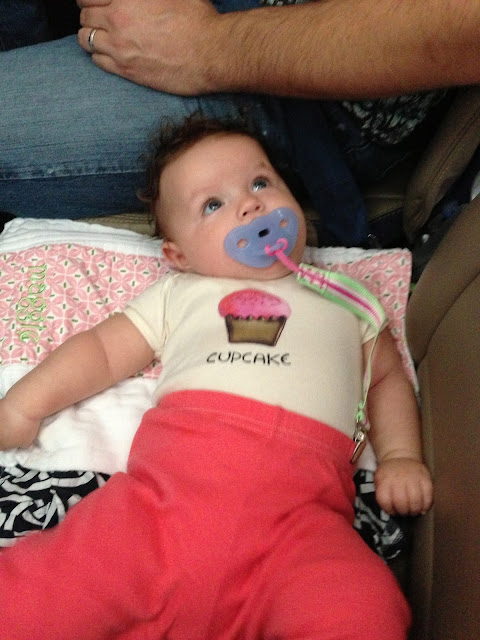 So all she wanted to do was play and look around at everything.  It was a little tiring but at least there were no melt downs.  Which I'm shocked since she was tired.  There was a little bit of fussing but lucky the "white noise" of the aircraft drowned that out.  And of course she fell asleep five minutes before we landed.  Isn't that how it always works?

Some other tips that we tried were feeding her a bottle as we took off and landed.  If she didn't seem interested in the bottle we tried giving her a pacifier to create the suction to pop her ears.  This worked great and she wasn't bothered at all.  I was extremely nervous about this as she had her first ear infection the week before.  I did have her ears checked again before we left and they were thankfully perfect.

We also checked with the airline to see if it was a full flight and luckily it wasn't so we could spread out a bit.  That was very helpful as I couldn't imagine a third random person sitting right next to us.  We also gate checked our stroller and just rented a carseat from our car rental place.  Looking back I would have probably just brought our own car seat and checked it.  The one the rental place gave us was a tad worn out.

I also pumped right before we got to the airport so that I could just bottle feed her on the plane.  It really wasn't an issue with TSA bringing breast milk through security.  All they did was hold a testing stripe above the bottle and then run the strip through a machine.  That was it!

I would also say bring several toys they haven't seen before to keep them interested.  However, she was still at the age where she didn't play with a lot of toys.  So we were the entertainment.  Lets just say my arms got a workout.  :)  Overall, she did really well. 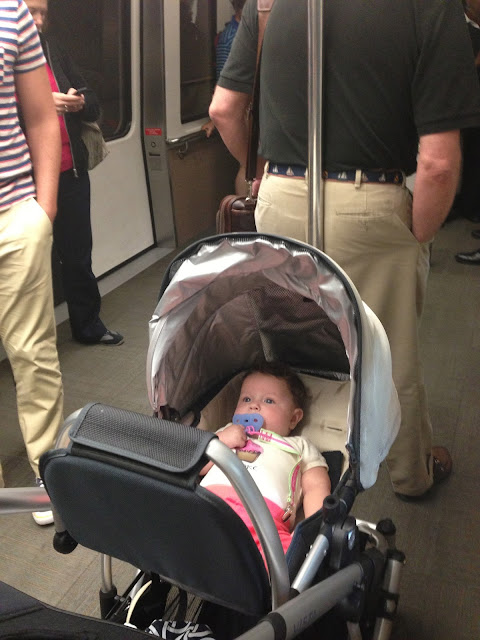 Her first tram ride through the airport. 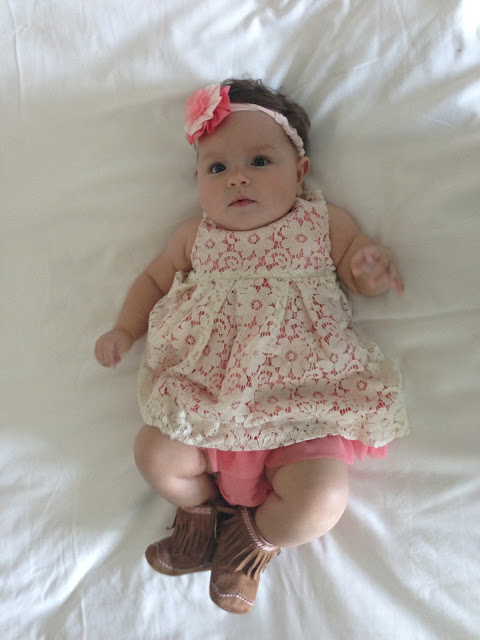 Once we got checked into our hotel we all freshened up and tried to let Maggie nap (which didn't last very long).  Then we headed straight to an art show!

A few months ago Ryan and I started talking about taking a little trip for my up coming 30th birthday on August 2.  (Yikes!)  We discussed going to a beach somewhere just to relax and not have much of a schedule.  It then became a little overwhelming to plan it all out.  It just so happened that my SIL and MIL had an art festival show that they were involved with in Colorado during the same time frame.  We both decided that it would be fun to tag along with our family, have some built in babysitters and enjoy some cooler weather.  So that's how Denver happened. 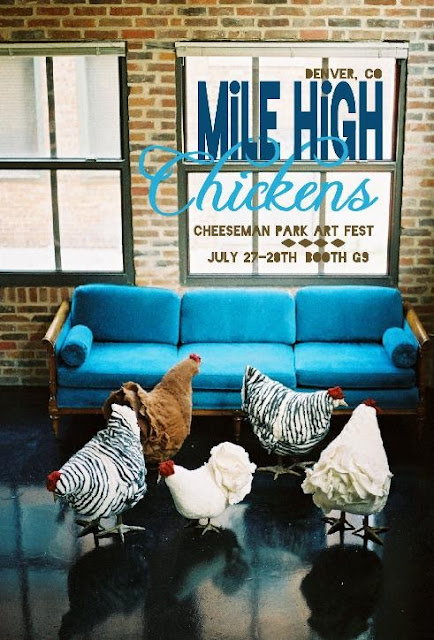 This was my in-laws advertisement for the show.  Here is their website for their uniquely awesome chicken footstools. 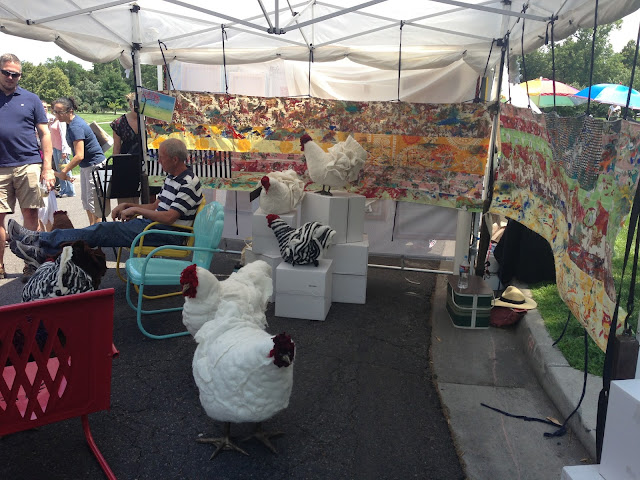 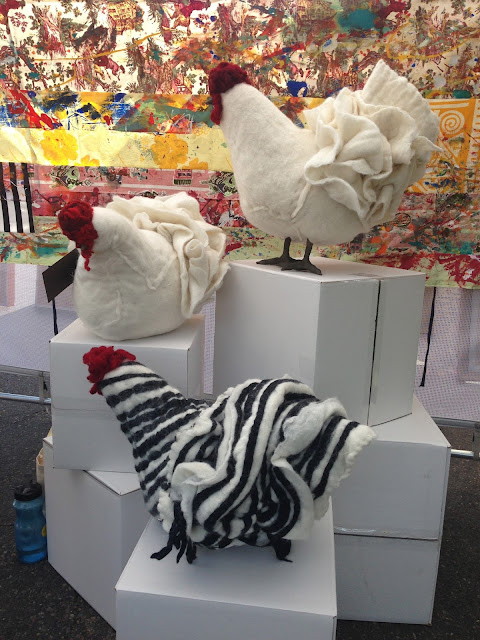 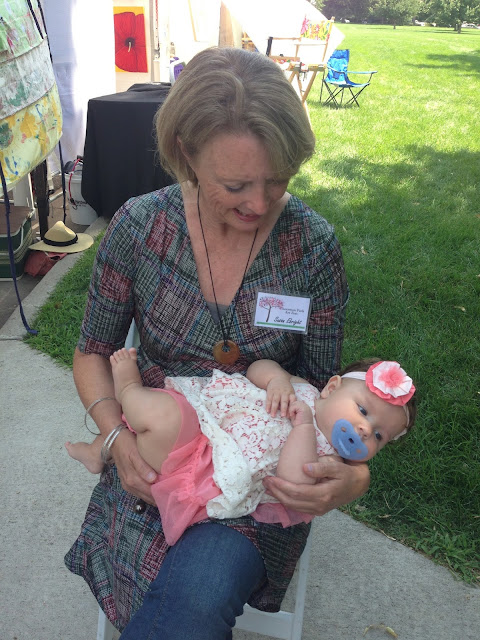 I think Mags might have stole the spotlight a few times.  She's just so darn cute!

She was a little cranky because she was still pretty worn out from all the traveling. 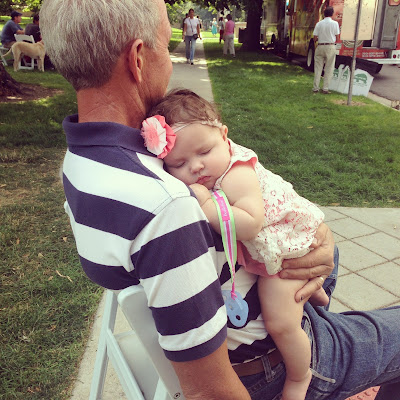 And crashed on her Papa.  There is nothing cuter then a chubby, sleeping baby.  ;) 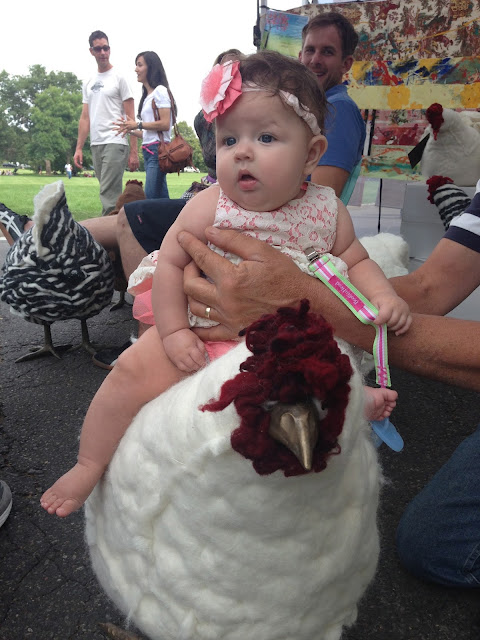 Uncle Evan in the background

She did rally to help her Meme & Aunt Sally sell some chickens though. 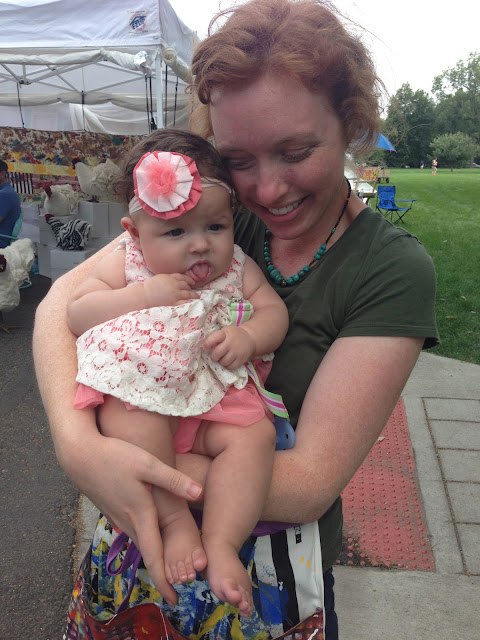 It was such a cute show and great weather!  Eventually we headed out to grab some food and explore a little.  Then it was bedtime.

The next day Ryan's best friend came into town to see us because he just lives a few hours away.  We hadn't seen him in years so we were pretty excited to be spending time with Miles and his girl friend, Jessica. 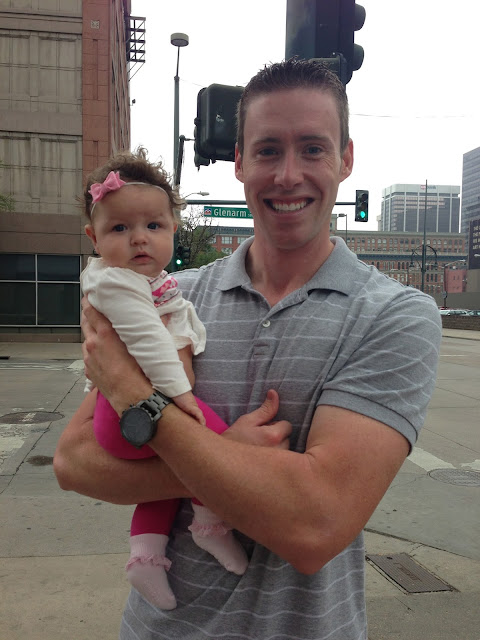 We explored the 16th street shopping and then headed to West Highland to eat. 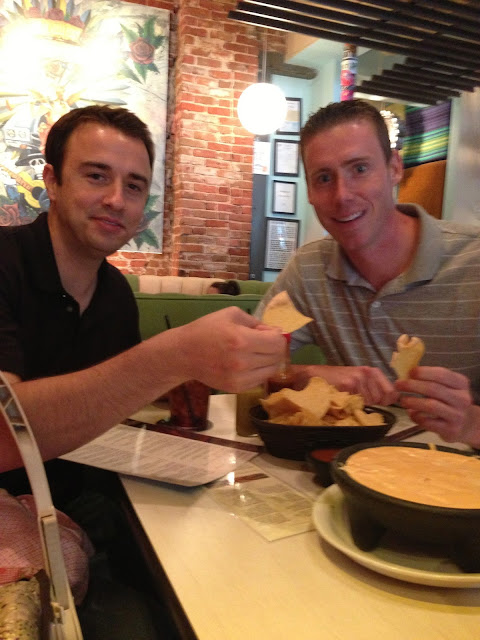 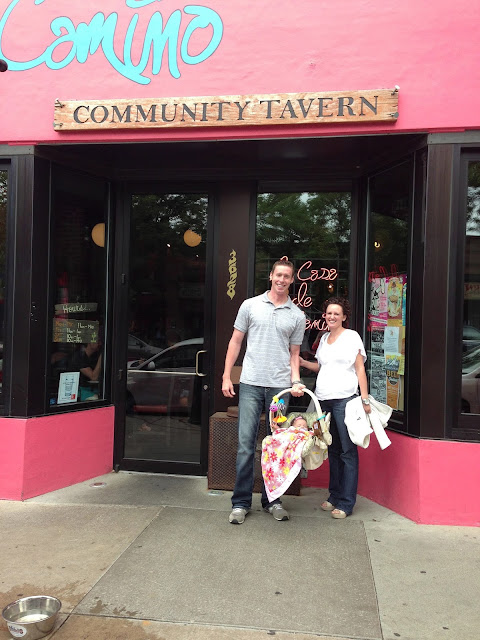 We definitely recommend El Camino if you are ever in town! 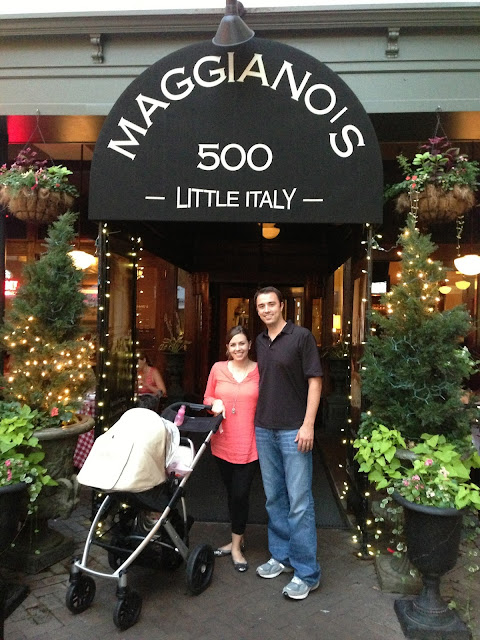 That night the whole family got together to celebrate my up coming 30th B-day.  Of course I forgot to get a group picture but I did get one of the three of us. 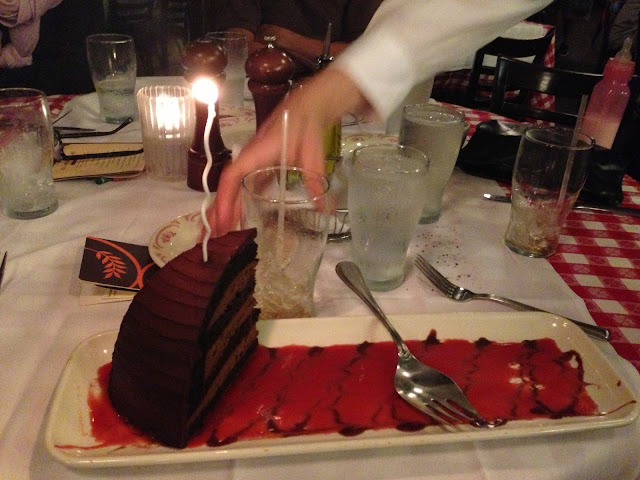 What's a birthday without the free dessert??? 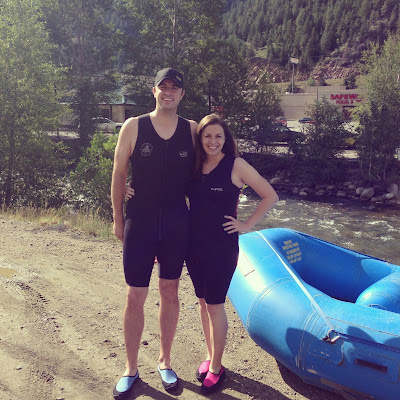 The next day we took advantage of our babysitters and Ryan & I headed to Idaho Springs for a little white water rafting.  It was actually perfect weather and just missed the rainfall that came right after our adventure.

I'm so lucky to have this man as my partner in life.  He is so sweet to plan all these adventures to distract me from the fact that I was turning 30. 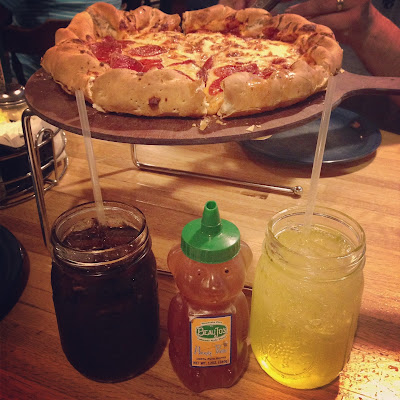 We worked up an appetite for pizza at the famous Beau Jo's.  Another place I would highly recommend!

That evening the whole fam headed out to explore the sweet little town of Louisville and eat dinner.  I could totally live there in a heartbeat!  We loved all the outdoor eating options and the small town feel.  It was so neat to see so many young families just hanging out with each other. 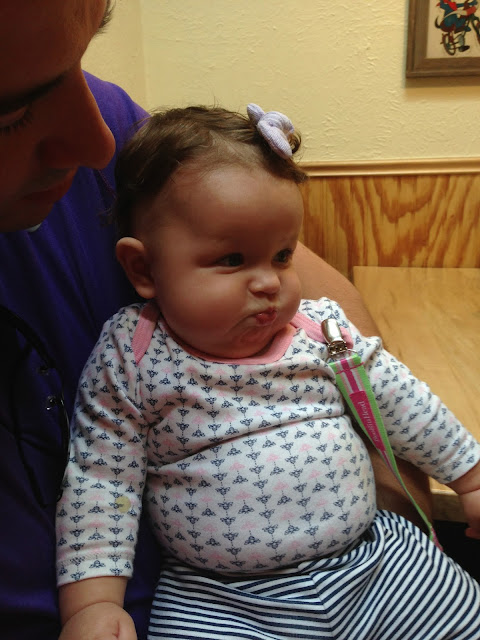 Maggie's new face that she likes to flash at people. 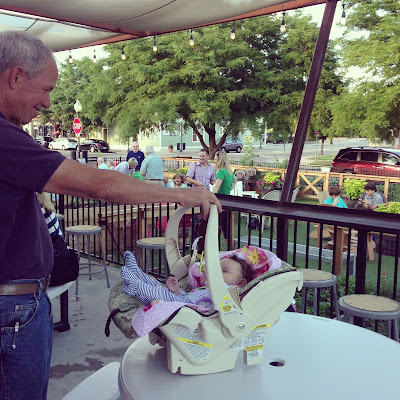 One of the best ice-cream placing we've ever been to called Sweet Cow.  Again, seriously loved how everybody was just hanging out outside and letting their kids run around.  Now I just need to get my family to move here... 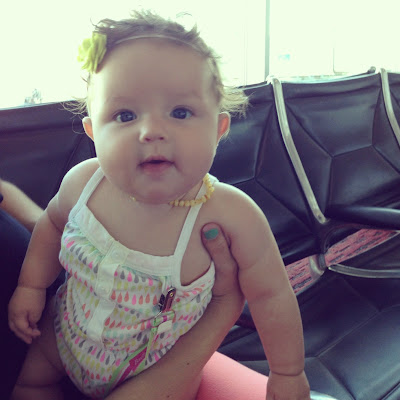 The next day we headed back home after a very fun trip.  This time we didn't try to keep Maggie on a schedule and we had a lot more success with her sleeping.  Go figure. 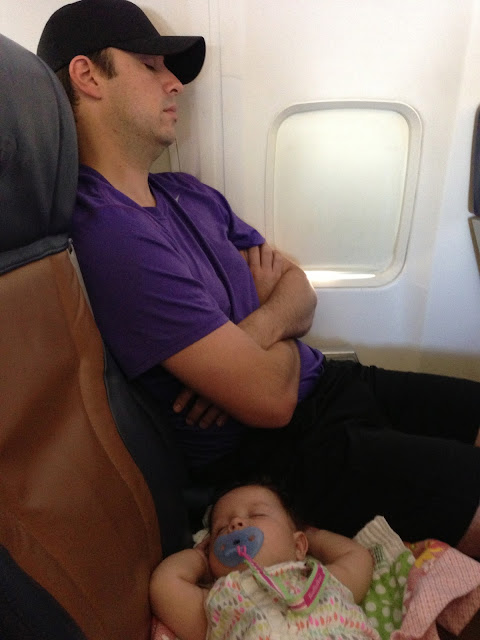