**The lighting is really off in all these pictures. Boo!**

We are getting so close!  Less then two freaking months away now and so much to still do!  I'm finally to a point where I can even feel like I can even show a little peek at the nursery.  I can't believe how long this is taking us to get done.  I think it's a combination of being too busy, not making up our minds and our ideas taking longer to make.  I always thought the nursery would just come together but it's been so much harder then I thought!

I forgot to take true before pictures.  We gave away the old white wicker furniture that used to reside in this room before I snapped these pictures.  There's a blow up mattress in these pictures because we had just had guests stay with us, and we had already gotten rid of the bed in there. 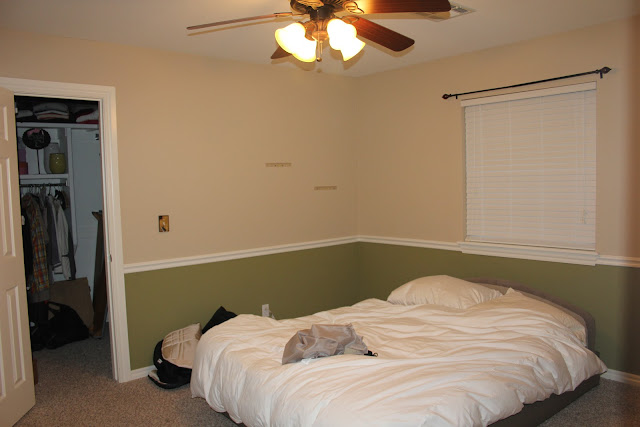 This used to be a cute little boy's nursery when we bought the house. 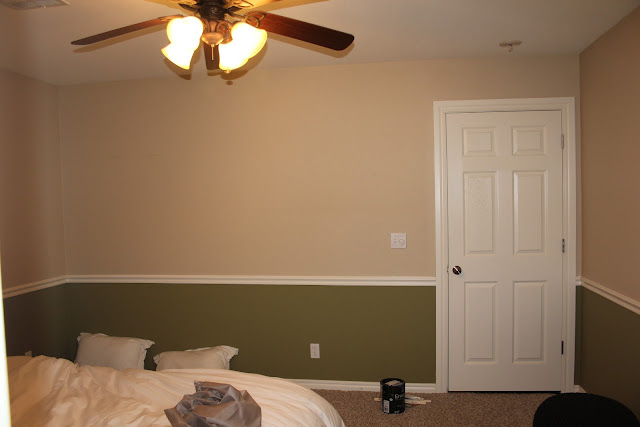 We decided to go with a grey and pink themed nursery with touches of yellow.  I actually had to pull the hubby back from going overboard with the pink. Ha!  The decision was ultimately made to paint the walls a light grey.  You would be surprised how hard it is to pick the perfect grey color!  Ryan actually had to paint it twice because the first color of grey had way too much blue in it.  (Ryan wouldn't let me anywhere near the room while he was painting because of the fumes.  This was even after I told him it was perfectly safe!)  Then we decided that the trim needed to be a brighter white so that all got painted as well.  All that to say, it took awhile to finally get the right color and finishing painting everything. 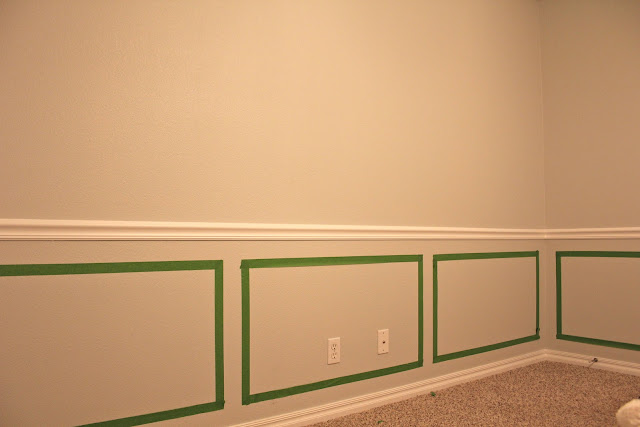 Little did I know how much work that was going to be.  It took forever because there were so many details to think about!  Ryan first taped off the walls so that he could make sure the sizing and number of boxes looked right on each wall. 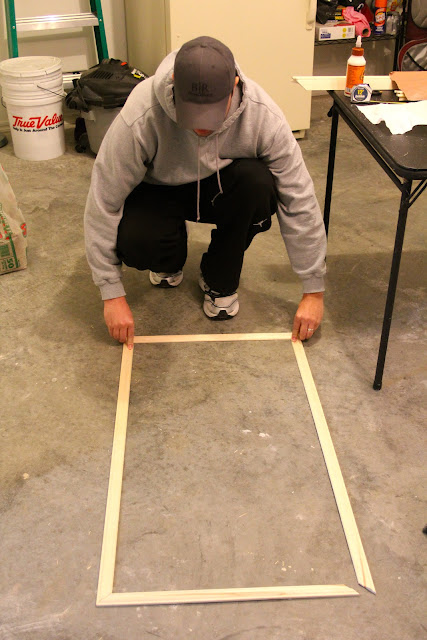 Then he had to borrow a miter saw and nail gun from a friend.  He watched some tutorials online and then went to work.  I was really regretting our decision to make these at about this point.  It was taking so long and I just wanted to get the nursery done!  Ryan had to measure and cut so many pieces of wood, and he had to go to two different Lowe's to get all the material.  After pre-painting & gluing them together, I helped him nail them to the wall.  We even had to take some down because we didn't space them out correctly.  Talk about nightmare!  Then he had to fill in the nail holes, calk the seams, sand and retouch up the paint. 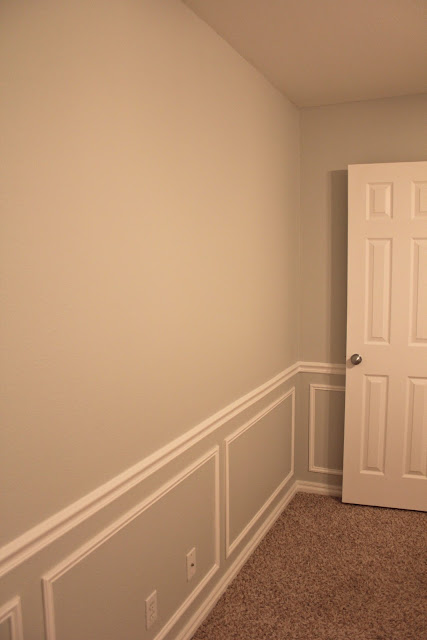 And now they are FINALLY done! 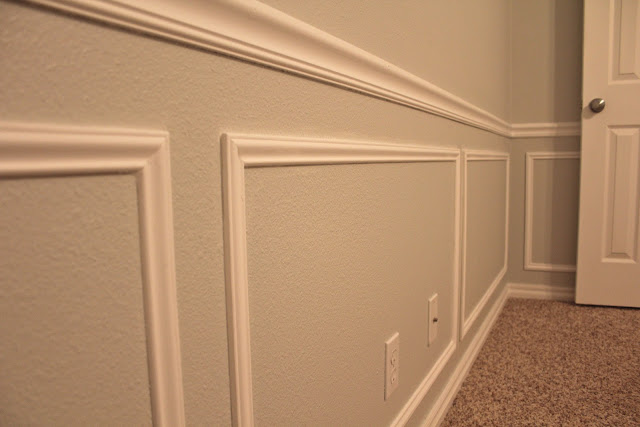 Even after everything it took to create these, I do think they were worth it and totally make the room.  But maybe next time it would be worth hiring someone else to do it.  ;)  Though, I think Ryan was really proud to have made something for his daughter's room.  He's so cute!

Now for the main attraction.  Our crib! 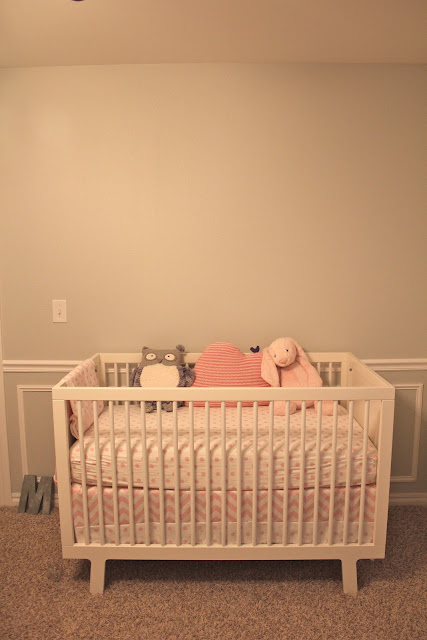 After much debate we decided on a modern, clean lined crib.  I love it!  This room will actually have a mix of modern, tradition and a little bit of vintage.  We'll see if it all comes together in the end.  As you can tell we still need to hang something above the crib. 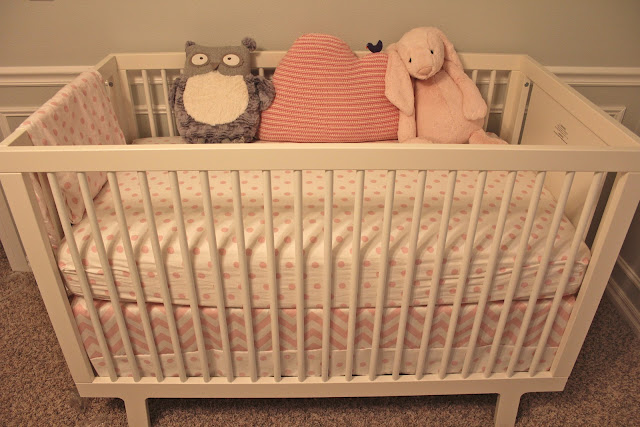 It also seemed like it took me forever to decide on what bedding to get.  Ryan's mom generously bought us the bedding for Christmas and my mom helped to pay for the mattress.  We are too blessed.  I decided that something simple and graphic would be perfect.  After talking it over with the hubs we decided against a bumper because you can't have one anyways while the baby is little.  Plus we thought it would seem cleaner looking with the modern crib. (The dolls and pillow will be removed before Maggie comes.  They are just for looks right now.)
- Crib from here (Looks like they are sold out there.  Here's the company's website.)
- Bedding from here
- Mattress from here
- Owl (gift) from here
- Cloud Pillow from here
- Bunny (gift) from Halls (department store in Kansas City)

We did get our book shelf, dresser and side table in but they just aren't pictured here yet.  Our rocker is finally getting here next week (after ordering it in November!).

Here's a list of what we still have to do:


It's so nice to finally see progress in this room.  I've been really getting anxious lately to get this room completed.  Then I will feel like all that's left is to get this baby here.  I promise to post pictures of the final product as soon as it's done.