San Diego was our last port stop of our cruise.  I was really excited about this spot because I've always wanted to go here and heard so many great things about it.  Plus our good friend, Cynthia, is from here (shout out!).

We were worried about the weather because the forecast called for rain and when we docked it was pretty overcast.  Thankfully, it didn't last long before the sun started to shine! 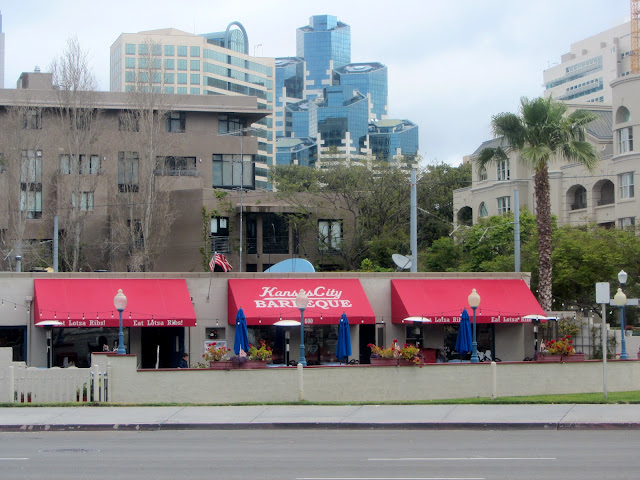 Here we decided to take a trolley tour around the city since neither one of us were familiar with San Diego.  One of the first things I saw on our tour was this Kansas City BBQ joint!! I was so excited.  Our tour guide explained that it was actually the bar/restaurant where Top Gun was filmed.  So fun!  Next time we are in the city we are eating there. 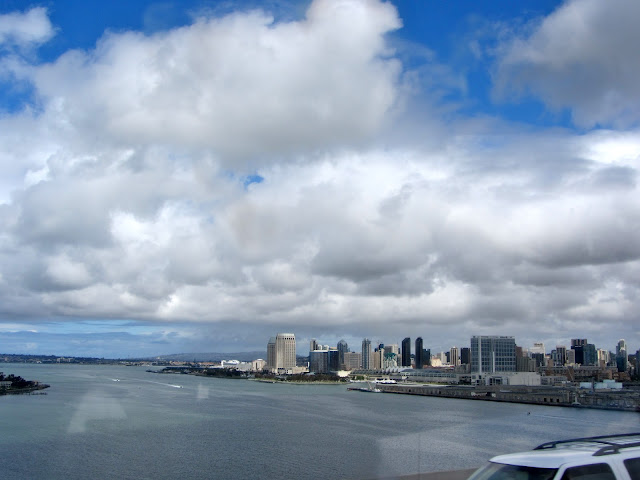 This is kind of a crappy picture of San Diego from the famous Coronado Bridge that connects San Diego to... you guessed it, Coronado.  I snapped this really fast from the window of the trolley.  I didn't get any great pictures of Coronado but it was absolutely gorgeous.  We were told that there is only one chain restaurant on that whole island (Panera). 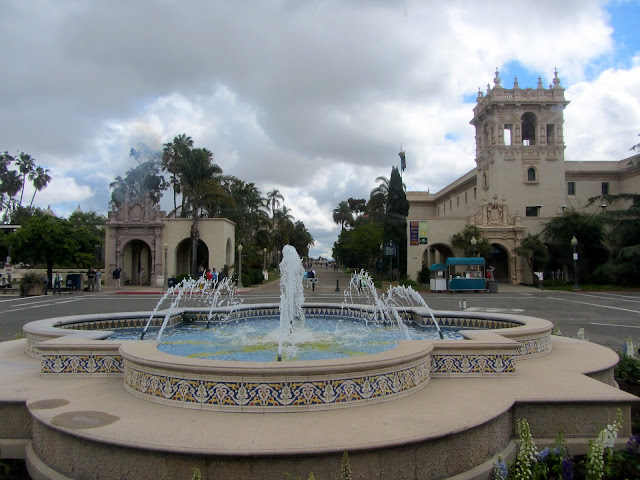 I believe this was by Balboa Park.  We only stopped briefly to see it but it was so gorgeous that it convinced me to move to San Diego pronto!  I'm dead serious.
The famous San Diego Zoo was near this as well. 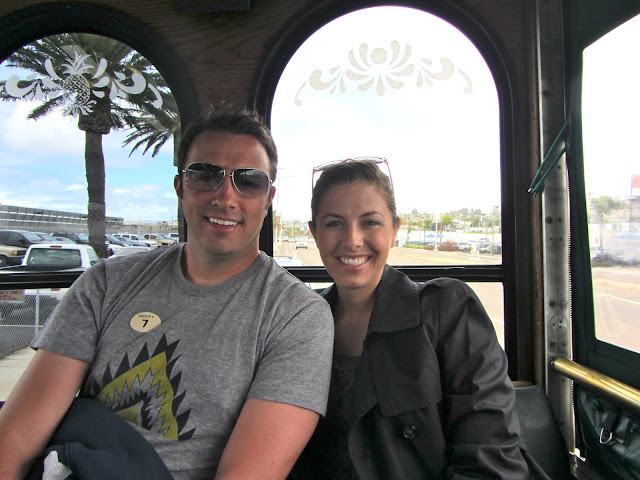 Quick pic from the back of the Trolley.  Some other areas the tour took us was to Old Town/Mission Valley, Downtown and Seaport Village. 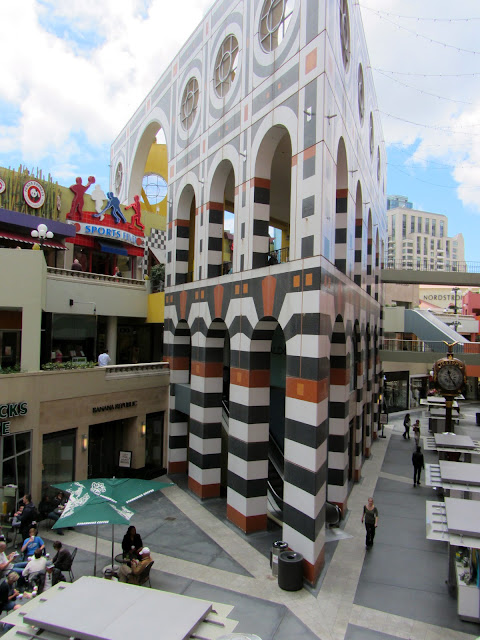 After the tour we ate a quick lunch and afterwards we noticed that we were by a huge mall so we decided to check it out.  When we got to the center of this (outdoor?) mall this is what we saw.  It was so neat!  Definitely a fun place to visit. 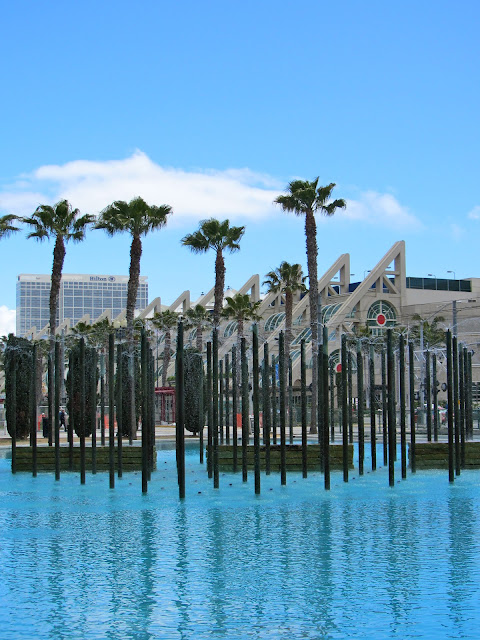 This is kind of a bad picture of their convention center.  It's right behind the water and palm trees. 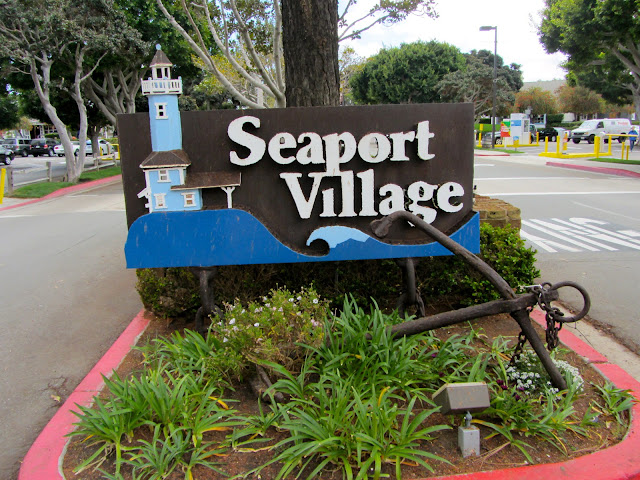 Ryan & I decided that we wanted to go back and explore Seaport Village some more because it looked so cute from our tour. 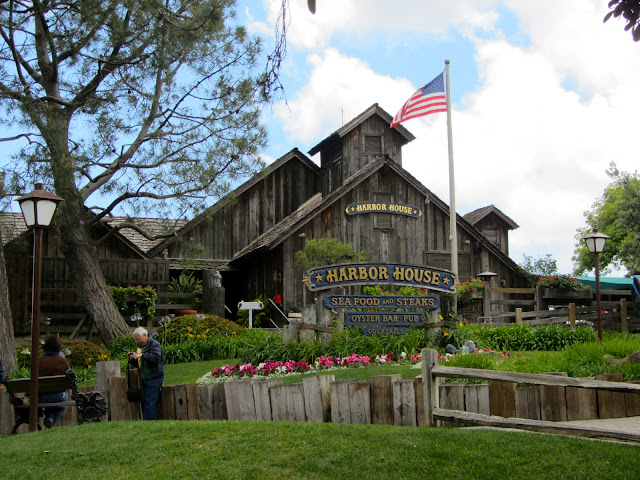 I mean seriously... Is this not so cute you could die?? 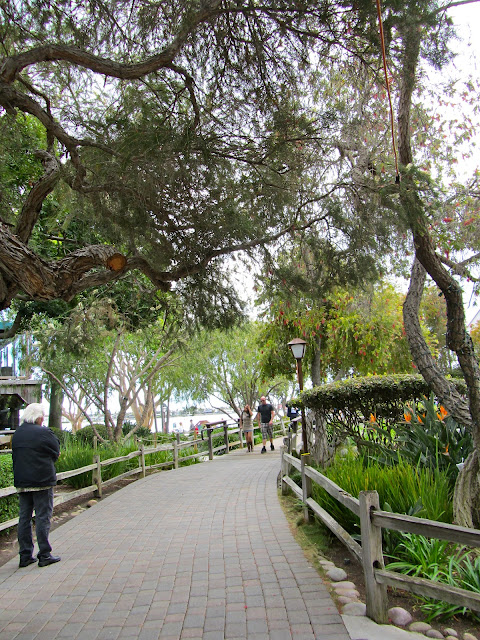 All the trees, paths, flowers and water just made it breath taking. 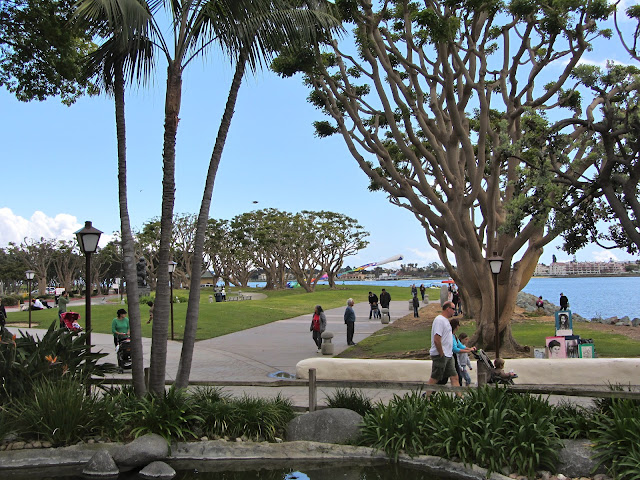 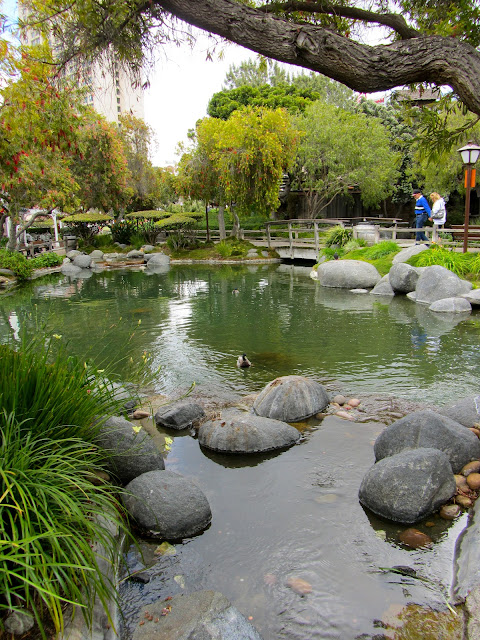 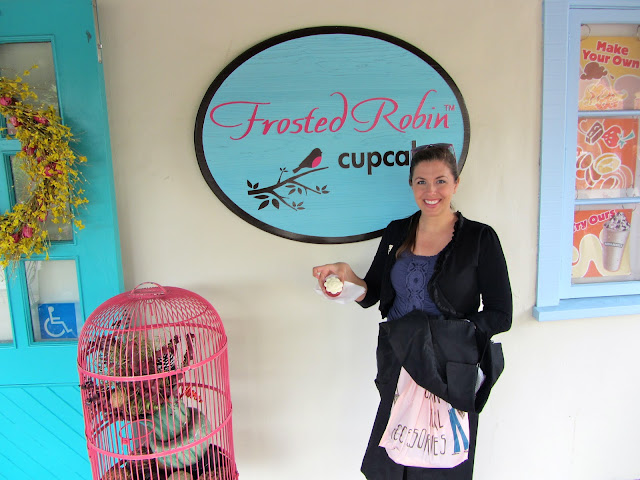 There were a ton of cute little shops that we definitely checked out along with this adorable cupcake bakery. 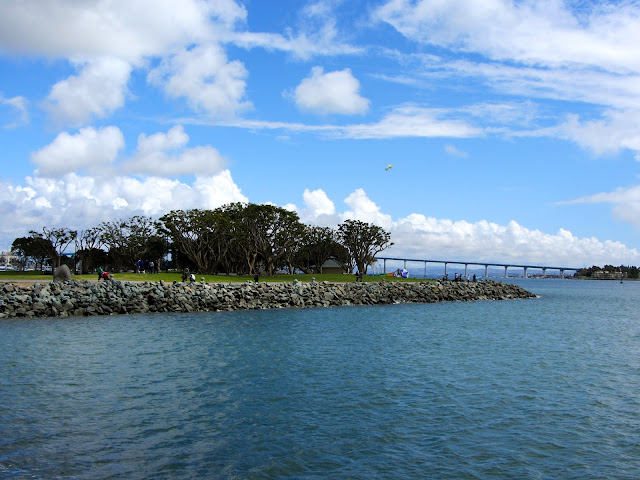 Here you can see part of the ginormous Coronado Bridge. 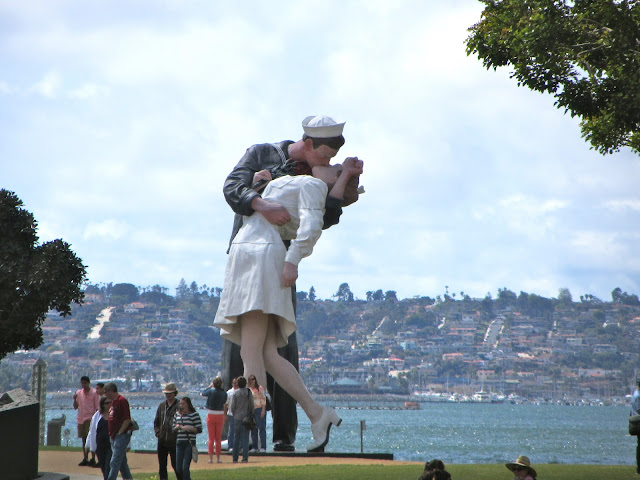 Then we walked along the bay to check out some of the huge ships and saw the iconic kissing statue of a navy officer kissing a nurse. 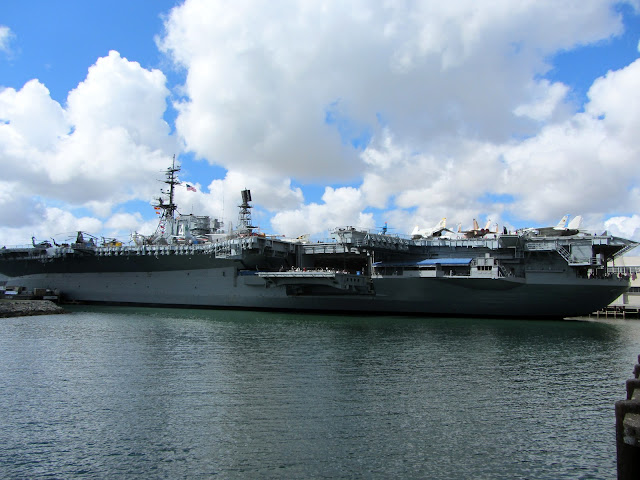 You can definitely tell San Diego is a Navy base from all the aircraft carriers and huge ships everywhere. 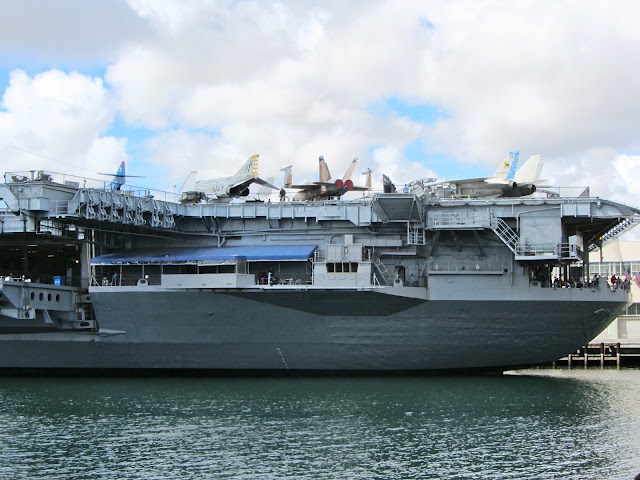 Do you see all those planes on top of this ship?  That can kind of give you an idea of how big this actually was. 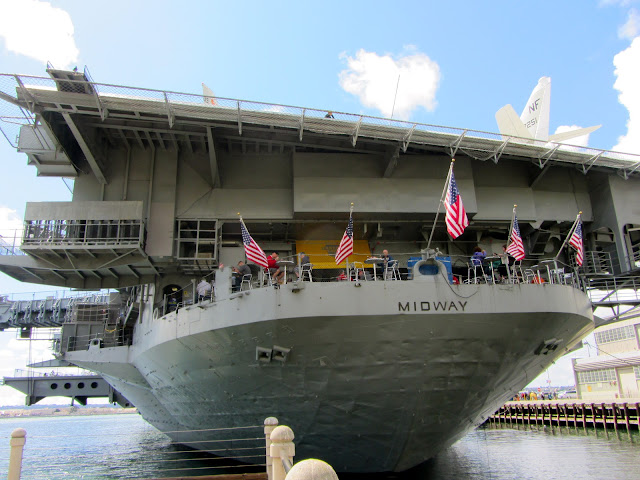 The USS Midway was open for tours but we didn't take one, maybe next time!  I mean, I'm going to live here and all.  ;) 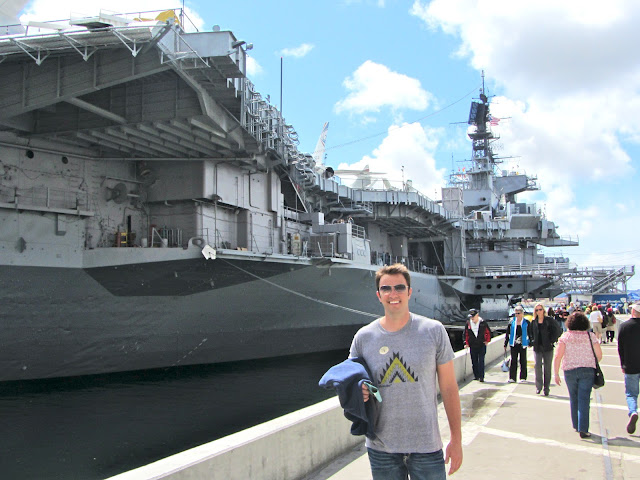 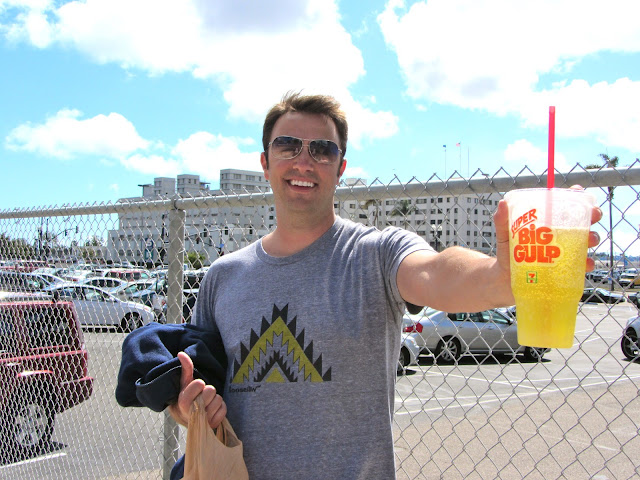 I had to include this picture of Ryan.  This was the first time on our entire vacation that he finally got his Mountain Dew and it was a Big Gulp at that!  Apparently, they only serve Coke products everywhere we went so he was feeling pretty deprived. 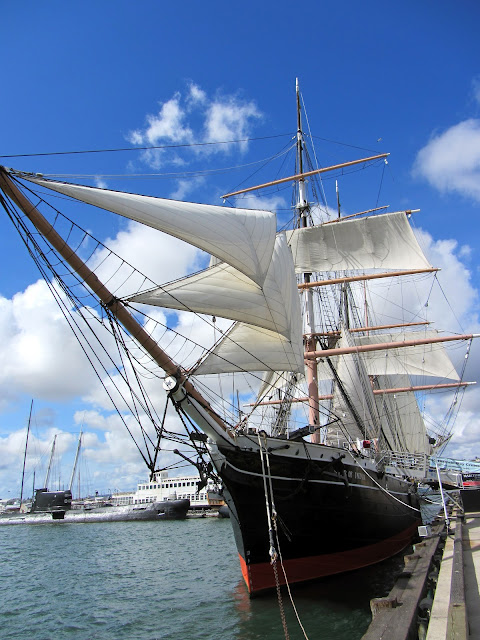 These are just some other pictures of ships we saw along the bay. 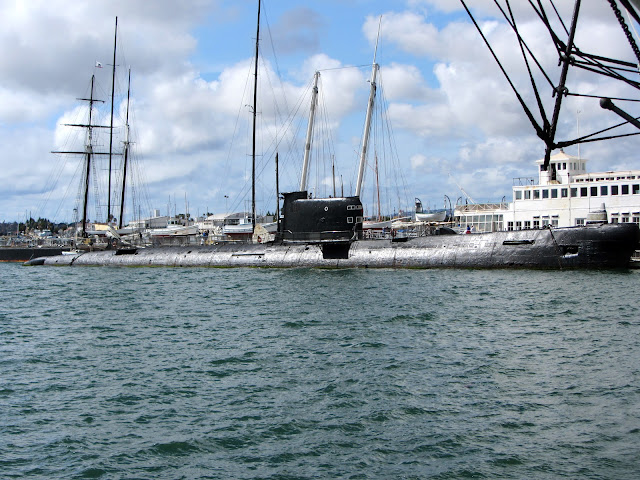 I think you can tour this submarine as well. 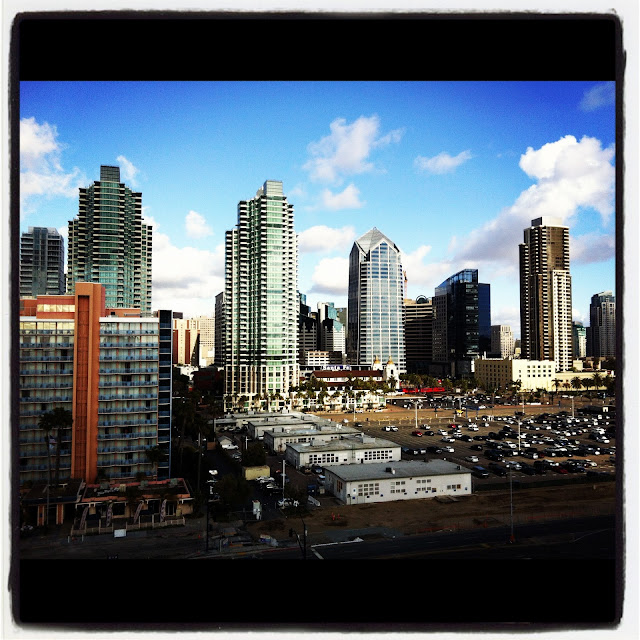 One final photo of the city of San Diego from our ship on our way out of town.  I loved this city so much that I really have been trying to convince Ryan that we need to live here some day.  You never know!  At least he promised we could go back and visit again. Ha!