We are back safe and sound!  It was a long, amazing trip and it was hard coming back to real life.  :)  I've been trying to sort through all our millions of pictures and it's taken me a few days to get around to posting a few of them.  There are so many that I think there will be several posts to look forward to over the next couple of weeks.  I don't want to forget anything!

So without further adieu, here is the first part of our San Francisco trip.  We were there about 4 days so I'm splitting this part of the trip up into two parts because we did so much while we were there!

We got into San Fran really early on Saturday morning so we had the whole day to explore.  Ryan's cousin, Evan, and his wife, Joannie, were there to pick us up from the airport and were so kind to let us crash their place for a few days. 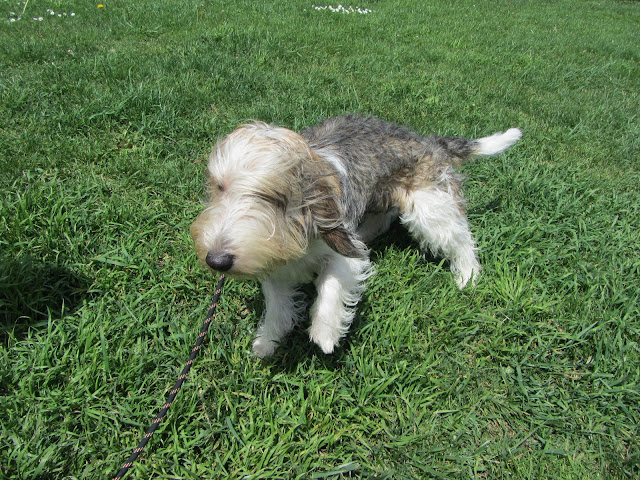 We got to meet their little man, Webster, who was the sweetest thing ever!  I was so sad to leave him by the end of the trip.  He is a PBGV (Petit Basset Griffon Vendeen).  I've never heard of that kind of dog before but I think I may need to get one!

Evan and Joannie live in a great part of the city called Pacific Heights and live right next to Lafayette Park which is great for Webster! 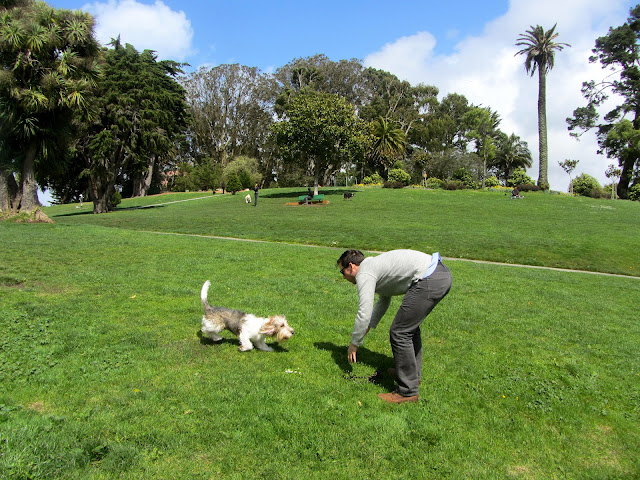 This city was so dang hilly that even their parks were just one giant hill!  You can sort of tell from this picture but it really doesn't do it justice.  I can not tell you how tired Ryan & I were from walking all around the city and tackling those hills!  It did made the city even more beautiful and unique though. 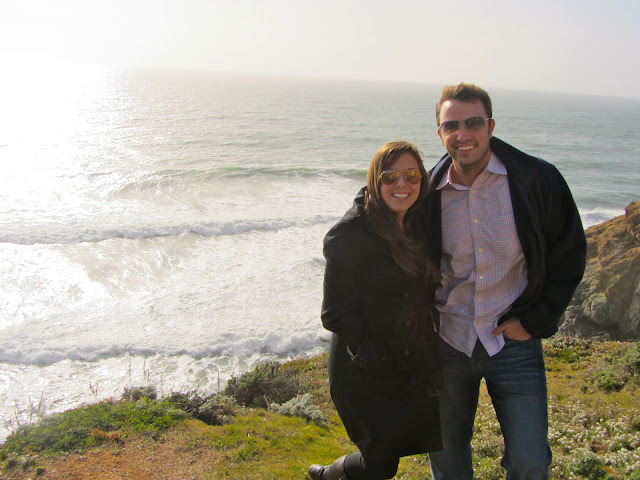 Evan & Joannie were so great to take us all our their city and show us all the highlights.  They drove us down the coast and stopped for great picture opportunities. 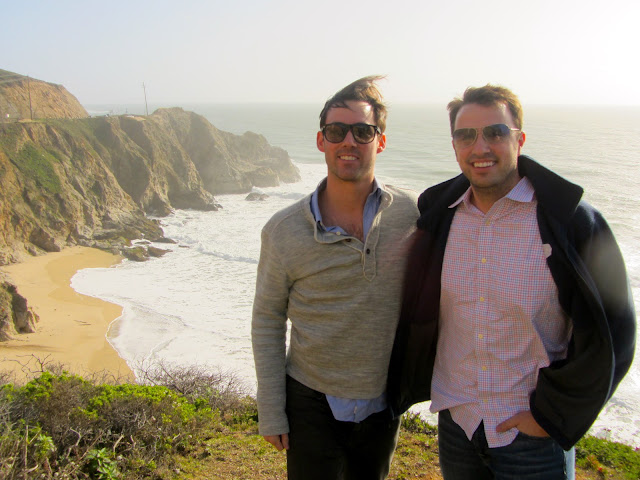 (Evan & Ryan)
It's pretty cool in San Francisco all year round.  I always thought it would be warmer since it's in California but I guess the bay makes the weather much different.  It's usually in the lower 60's upper 50's most of the year.  Evan did say it can get in the 70's in the fall time. 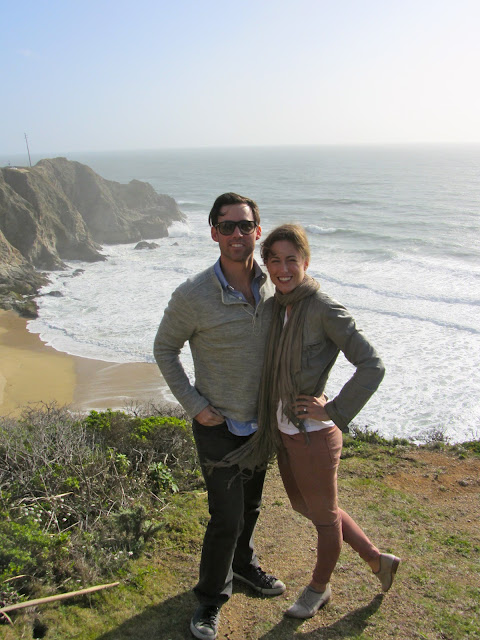 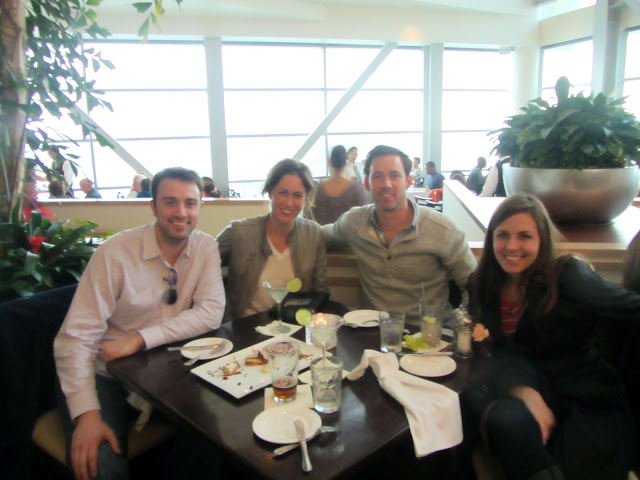 They took us to a place called the Cliff House that has just amazing views of the ocean.  It's a must see if you ever travel to this area! 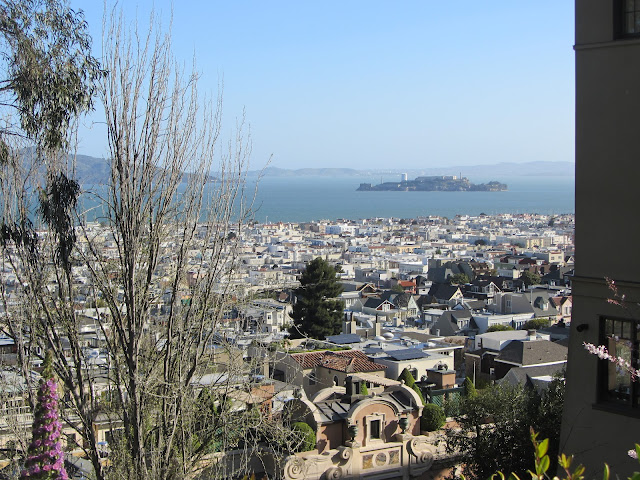 The next day was just gorgeous so we had to get out for a nice walk.  Evan took us to a part of the city where you can run stairs.  And can I just say I've never seen so many stairs in my life?!  I could only do them once.  Here's a view from the top of the stairs looking out over Alcatraz. 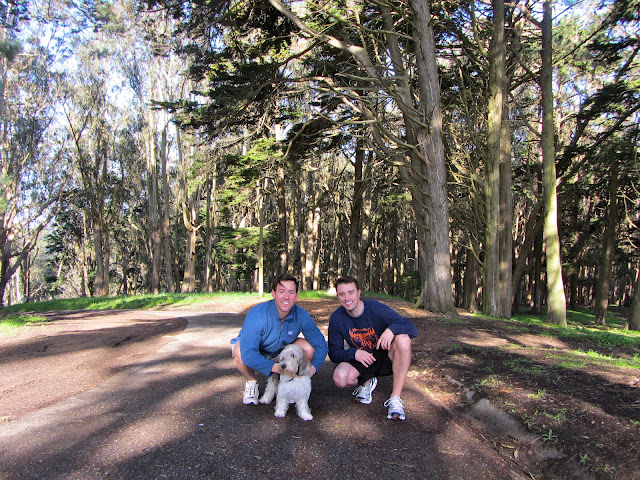 Then Evan took us on some trails in Presidio Park that led us down to the bay.  The trees and scenery were absolutely breath taking! 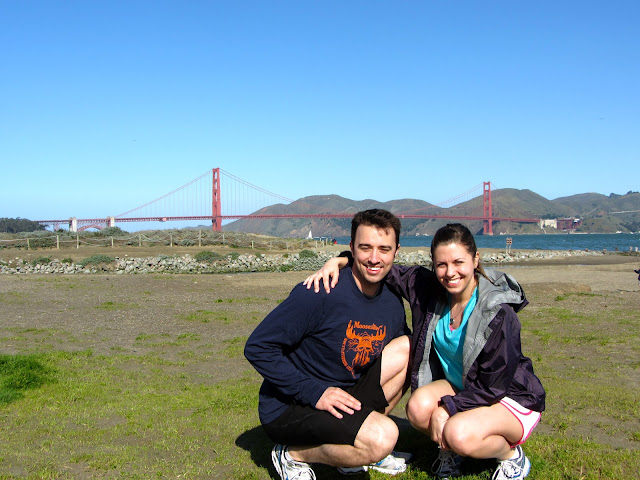 Ryan & I trying to keep our eyes open in the bright sun posing in front of the Golden Gate Bridge.  It was so clear out! 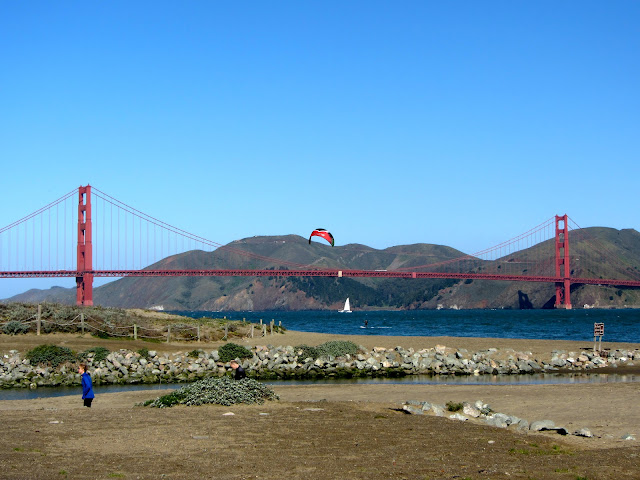 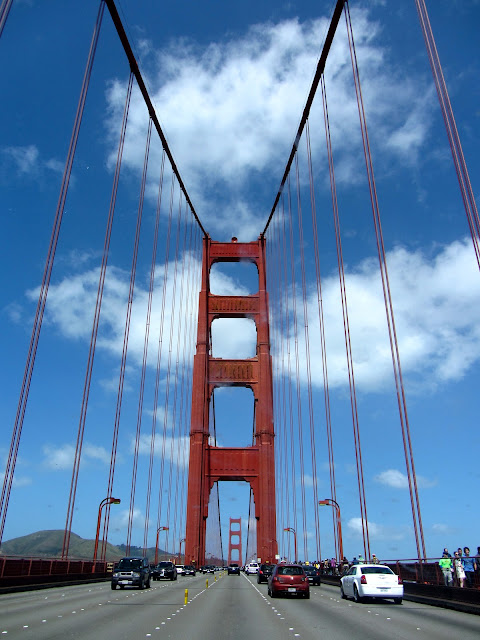 Later after we cleaned up a bit we drove over the bridge to some more adventures that I'll talk about in the next post. 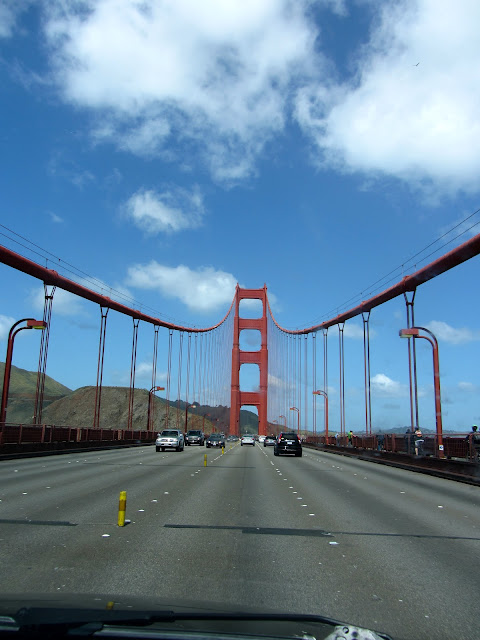 I could drive on this everyday.

Ok, I'll leave you today with pictures of Evan & Joannie's apartment that was so cute!! 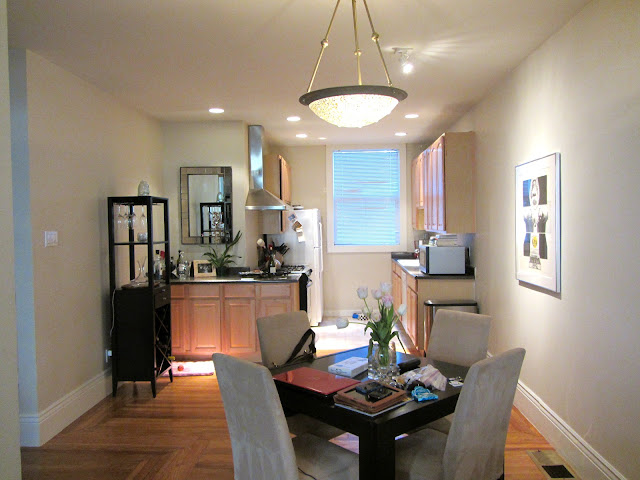 The kitchen and dining room (so much space!). 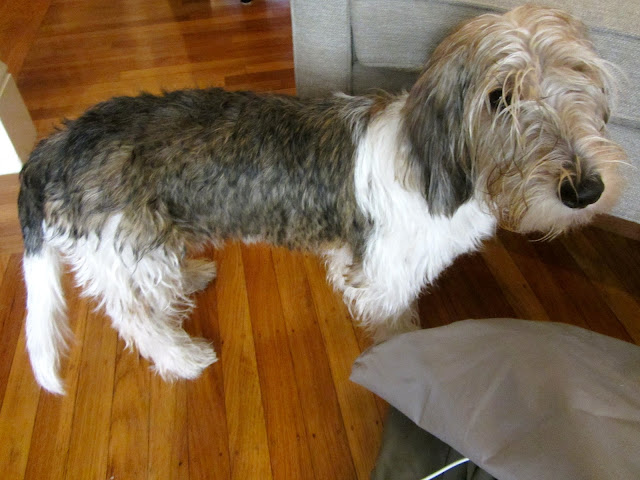 Had to throw in a picture of Webster who helped me take pictures.  awwww! 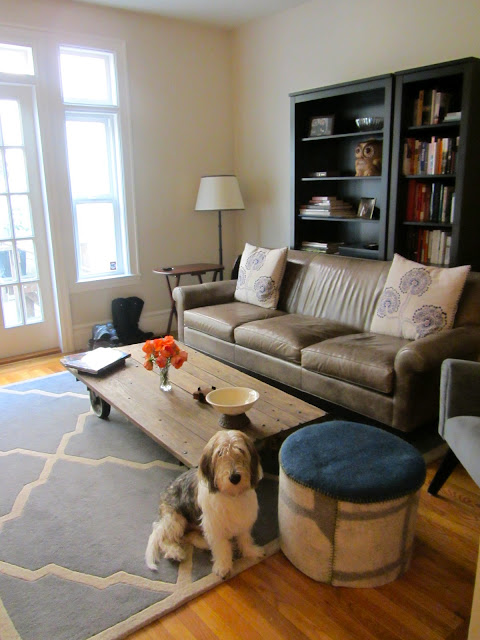 Living room.  I LOVED their furniture!  That couch was amazing. 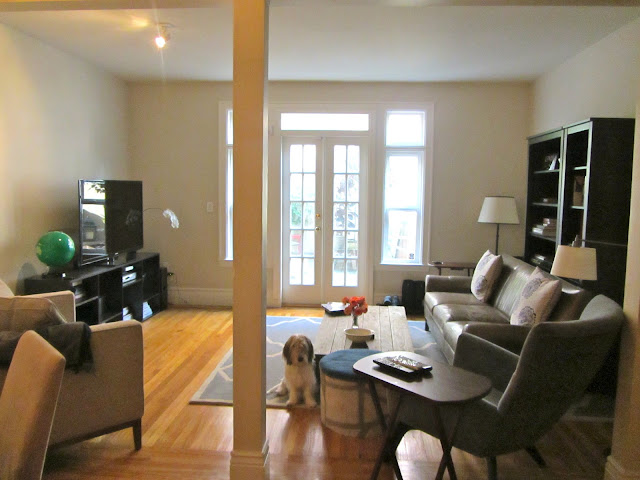 Very nice and open.  Since they have a ground floor apartment those double doors lead out to their deck/patio. 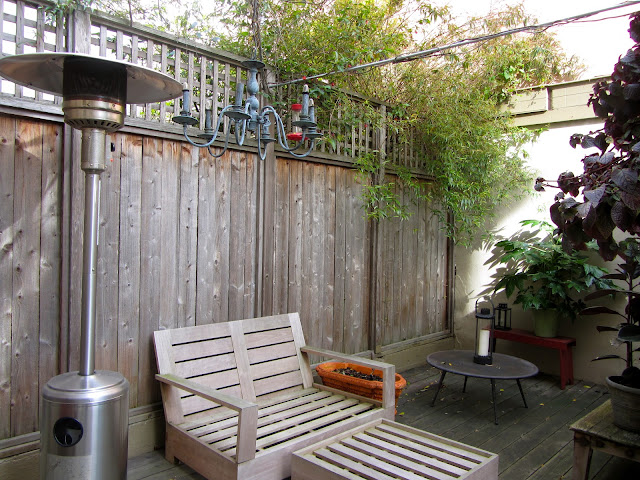 How gorgeous is this?? 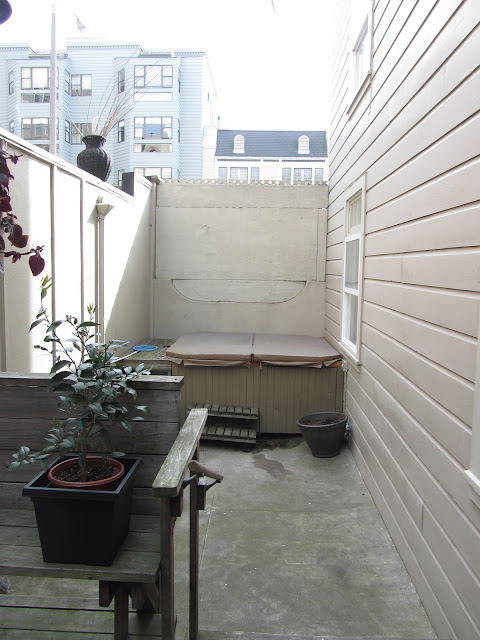 They even have a hot tub!  Their garage is behind that wall to the left.  They have such a great space in San Fran and can you believe they have a garage?!  It was such a perfect spot to walk anywhere you wanted in the city.  We were so lucky to be able to take up residence with Ryan's cousin for a short time in their beautiful home.  Thank you guys!! 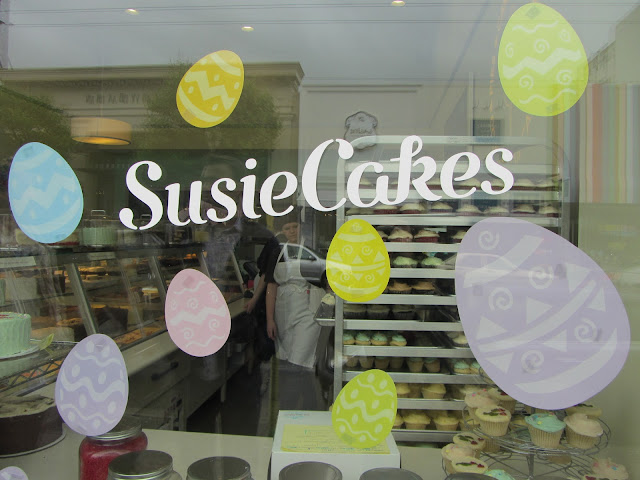 This last picture is for Ryan's mom, Susan.  This made me think of you!! :)