I never updated you guys on my 4 mile run from a week ago.  Yes, I did complete it without walking!  There were some killer hills so I was questioning halfway through if I was indeed going to make it without walking.  But I made it!!  There were so many people that packed the streets of Westport that I was dodging people, strollers and cars!  It was still a lot of fun seeing a sea of green and the crazy costumes.  People watching helped pass the time during the run.  :) 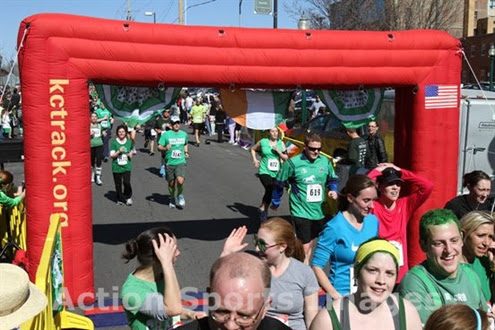 I believe I met my goal of running 10 minute miles.  The official time from the race was 40 minutes and 4 seconds, but my Nike + said that the race course was actually more like 4.07 miles and it said that I ran it under 40 minutes.  A friend of mine also said that his running program (a different one) said that the race course was 4.06 miles so I firmly believe that I ran good solid 10 minute miles.  :)  That's me above about to finish above.  I'm number #872 right under the middle striped flag.
In other St. Patty's Day news, my Aunt Cindy decided to host another Poker Tournament at her house that night.  Everybody had to come dressed in green (or their buy in would be higher!) and bring green food.  Ryan & I didn't have a lot of time to create something fun because we had other things going on that day (like a baby shower I'll post about later).  So we decided on caramel apples!  I've been wanting to make these forever! 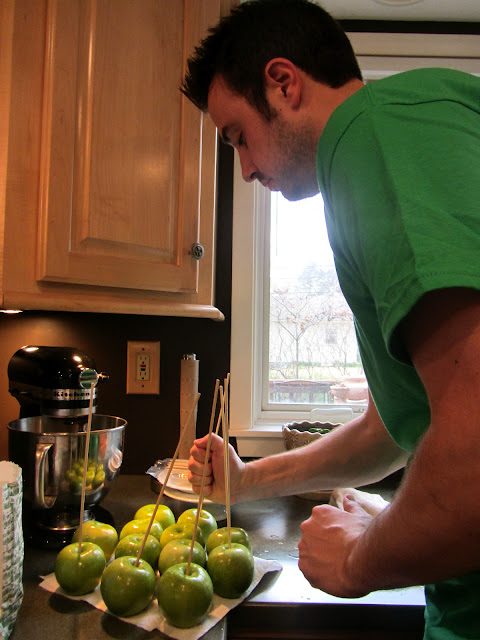 Ryan cleaning the apples and poking the sticks into them.  I couldn't find popsicle sticks anywhere.  After I bought these "way too long" sticks someone told me I could get them at Michael's.  Oh well! 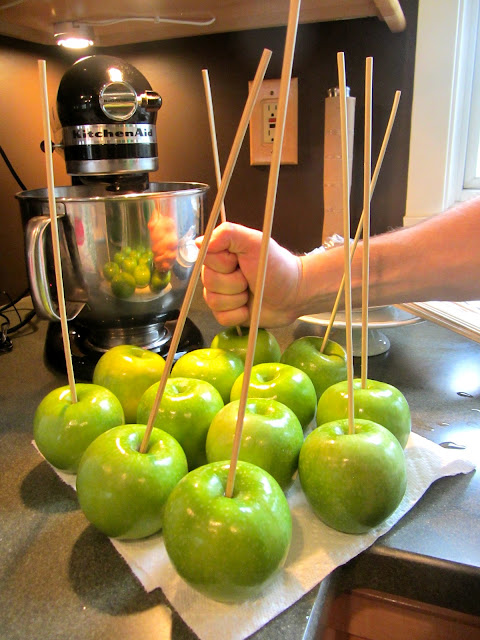 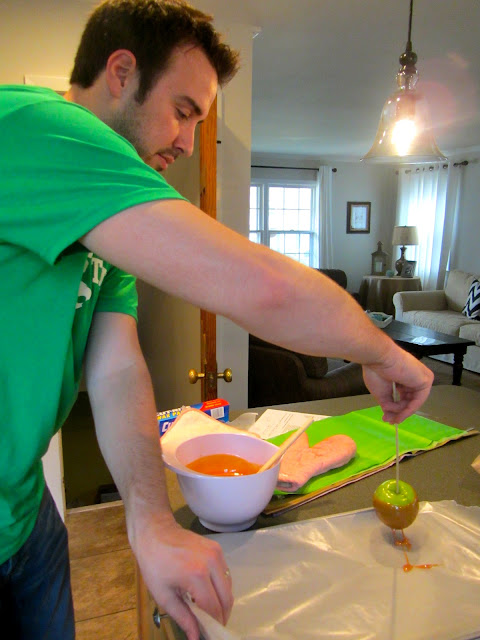 Luckily, unwrapping all the caramels and microwaving them didn't take too long.  Dipping them in the bowl and transferring them to the pan was messing though! 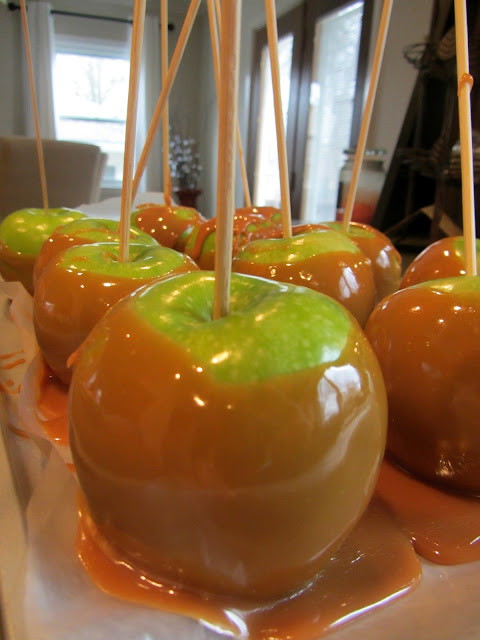 They were so good and were a hit at the party! 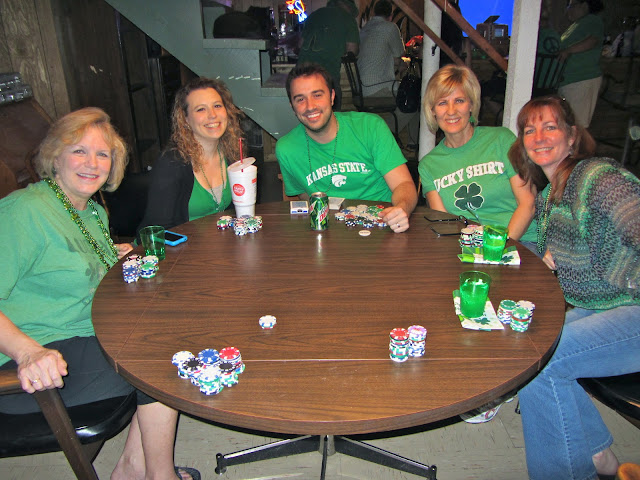 Ryan playing poker with the ladies.  There were a bunch of women there from my golf league.  It was so fun to see them again especially because we are about to start that up next month.  I'm excited! 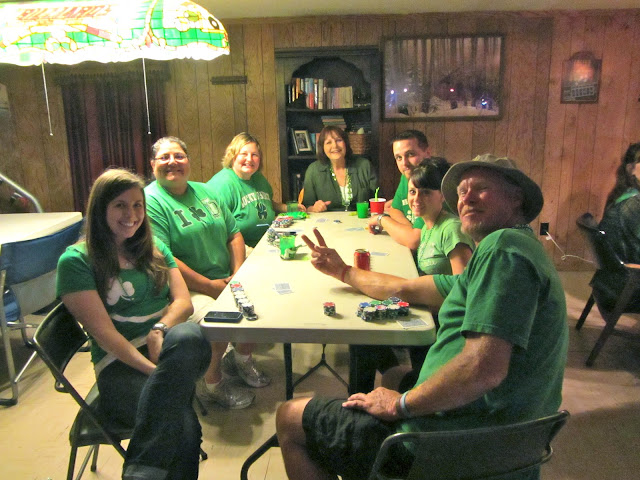 My poker table.
It's so hard to get quality pictures in a basement! 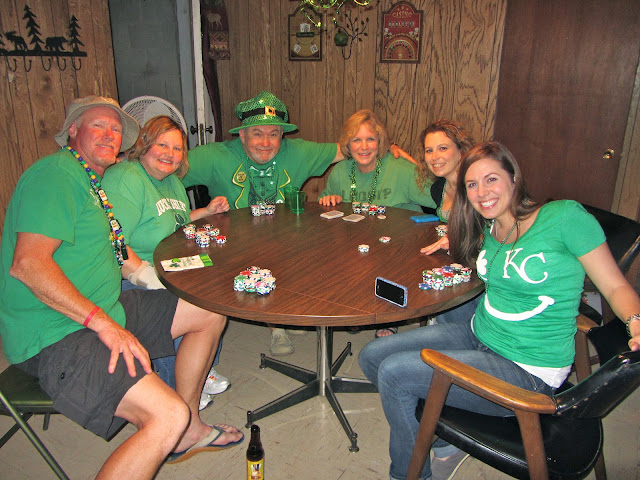 I made it to the final table!!  And guess what??  I got second place on my second time ever playing Poker. Ha!  Ryan was so proud.  :)  (I was happy to just beat him!) 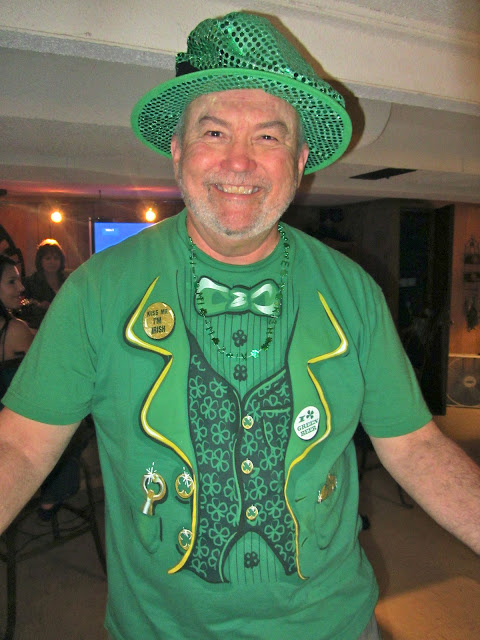 My Uncle John was the winner and he totally gloated about it.  There's always next year John!!! I'm after you!
It was such a fun night.   I love my family!!