Before & In Progress :: Living Room

Ok, so there are no befores because I totally forgot to upload them!  I promise to get those posted tomorrow because you wouldn't want to miss out on mint green walls now would you? ;)
(Click here for the before post.)

It's always so hard for me to post pictures of our house when I feel like most of the rooms are so far from being done.  But I think it's good to see where it's at now and then take notes on where I want it to go, and hear your ideas too!  I could always use a second or third opinion.  So here is our living room "in progress".  I'll tell you what we did and then tell you what I would still like to do/change. 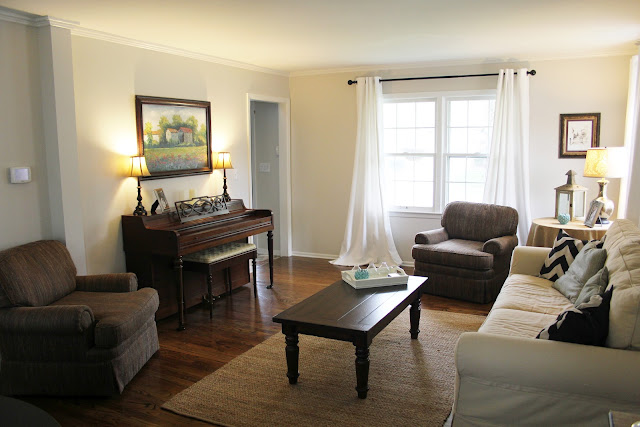 As I mentioned above this room used to be mint green so painting was first priority.  We ended up going with a Restoration Hardware color called Ash.  I like the color but after living with it for awhile I think it's just too light.  Maybe someday I'll muster up the energy to repaint it something a little richer.  The windows used to have dark brown blinds that really chopped up the room and made it seem darker.  So we replaced those with bright white curtains that you can open all the way to let the most light in but close at night for privacy.  Down the line we may still put in some white blinds, but right now we are liking the way it looks. 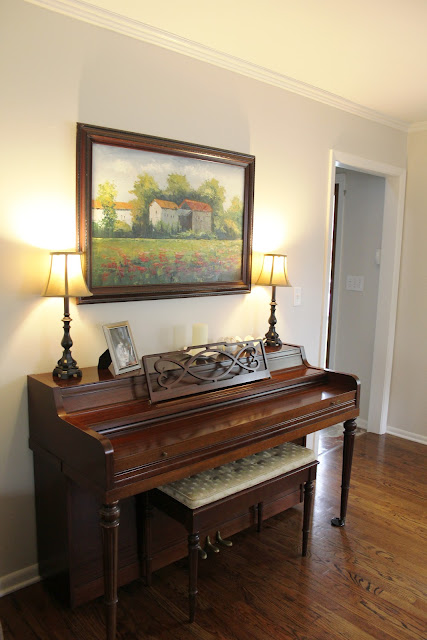 This wall is home to my Grandmother's piano that I grew up playing on at her house.  Someday I want to recover the bench with a fun new fabric to spice it up.
The entryway it through that door opening to the right. 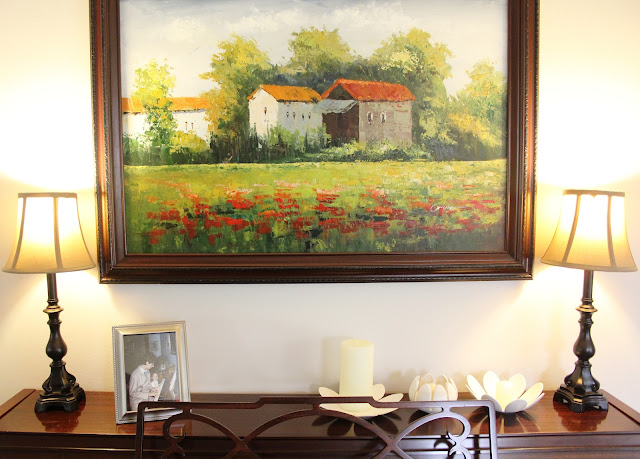 Closer look at the decor around the piano.  I'm not entirely happy with this.  I'm actually trying to get rid of the reds and greens and go more for the blues, greys and yellows.  So this painting will have to go once I find something to replace it.
The photo in the frame is of me playing this exact piano with my mom when I was little. 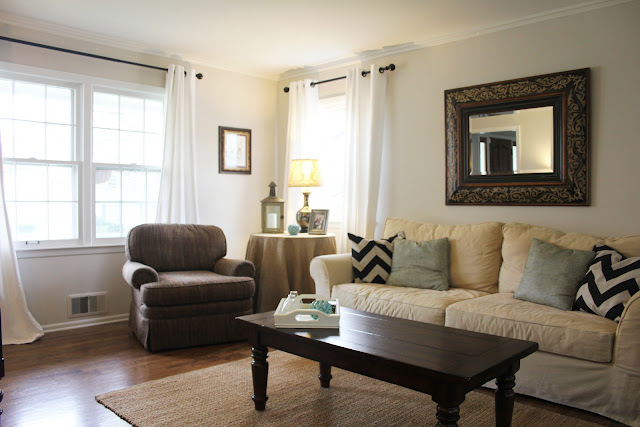 Over all this room is coming together but I feel like it's so brown!  It needs something to liven it up, ya know?  I want to add some more fun pillows on the couch and chairs.  (I got the chevron patterned pillows on Etsy.)  Speaking of chairs, down the line those guys are on the list to be recovered.  I think that will really help this room out.  Another idea I had was to add batten board to bring more interest to the walls without being overbearing.  You can't really tell in these pictures but it connects to the eat in kitchen and the walls seem really long.  I think the batten board would really make the rooms seem more connected and really pop.  Check out my inspiration for this room on my pinterest page here. 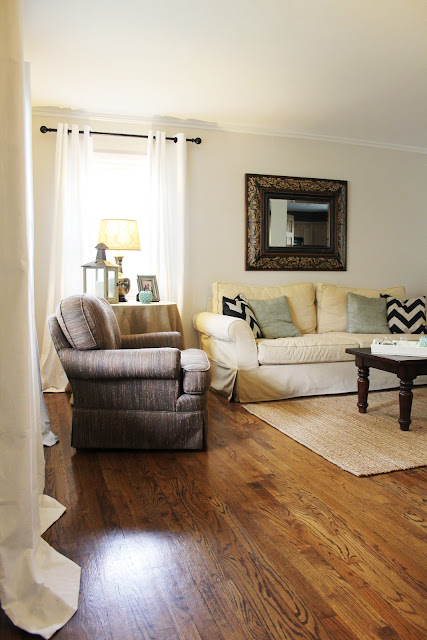 Another view from the entryway.  The mirror looks off centered above the couch but I promise it's not.  It's just the angle.  I purposely avoided taking pictures of the eat in kitchen but I'll show that room next.  You've probably already seen that from previous pictures anyway.

So do you have any suggestions or ideas for me?  Do share!
I'll be back tomorrow to show you the before pics that I totally forgot to upload.