Geez, I'm pretty behind on posting about my cousin's little daughter's birthday from a couple months back.  I thought it would be fitting to post it now since we just celebrated her little brother's birthday too a couple of weeks ago.
My cousin, Sommer, has the cutest kids!  Three to be exact.  I also thought she did a great job of coming up with fun unique names.  Her first daughter's name is Isabelle (Izzy), second daughter is Temperance (Tempy) and her son's name is Liam.
A few months ago we celebrated Isabelle's 2nd birthday over at her grandparent's house.  She is so stinkin' adorable.  Here she is with her grandma on the left and her mom on the right over seeing gift unwrapping. 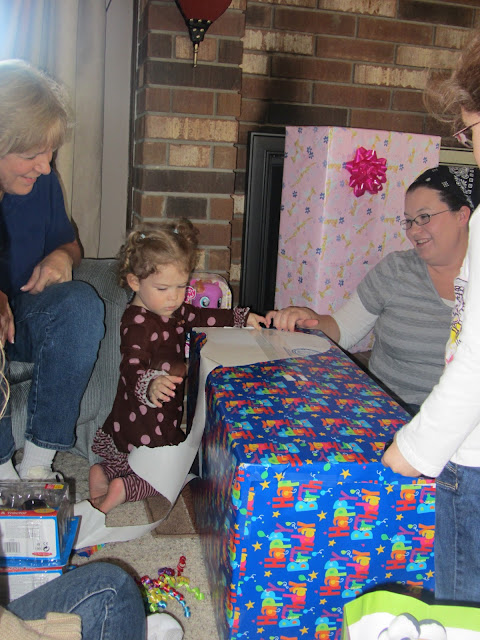 Getting ready to blow out her candles. 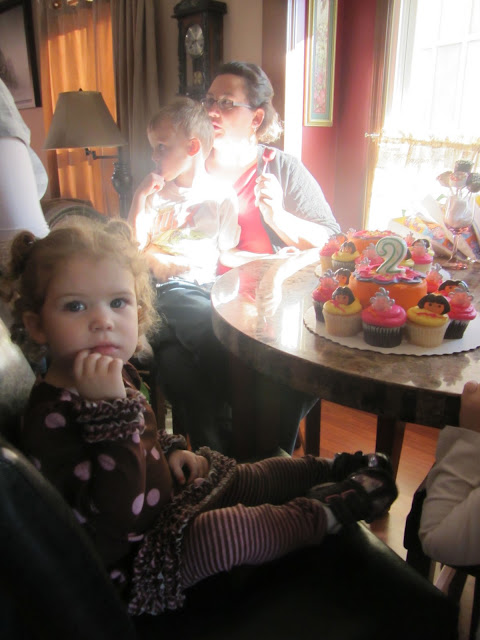 Sommer scored these adorable cakes and cupcakes from Sam's club for a killer deal. 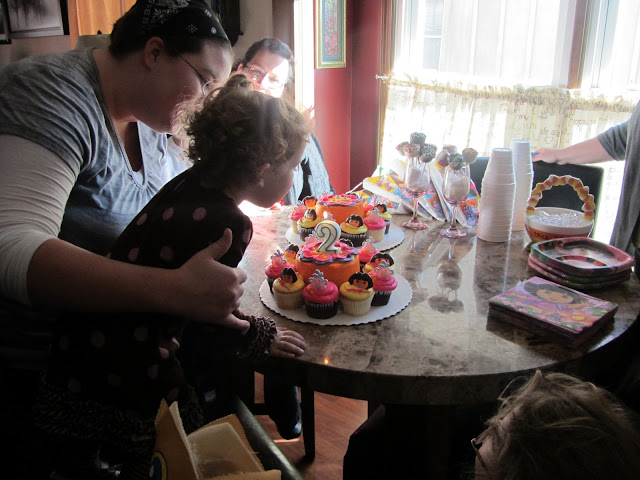 Just had to include this precious pic of my cousin Matt with his nephew, Wyatt. 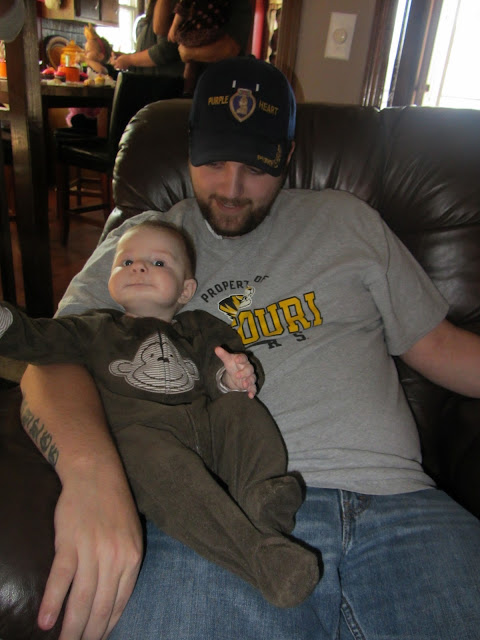 My mom enjoying the treats. 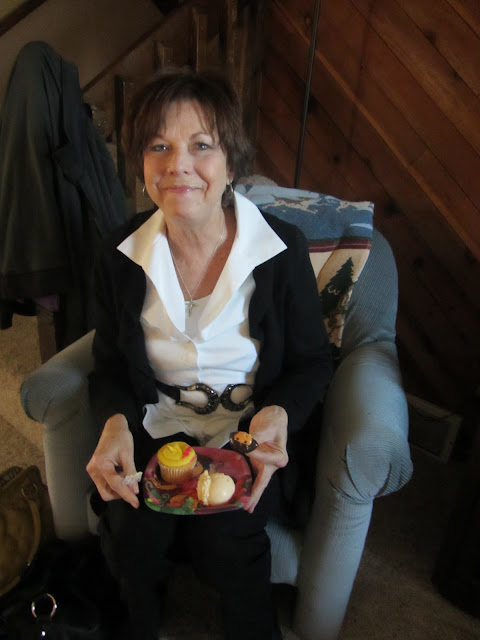 This little guy (Liam) is a lady's man.  Just look at those eyes! 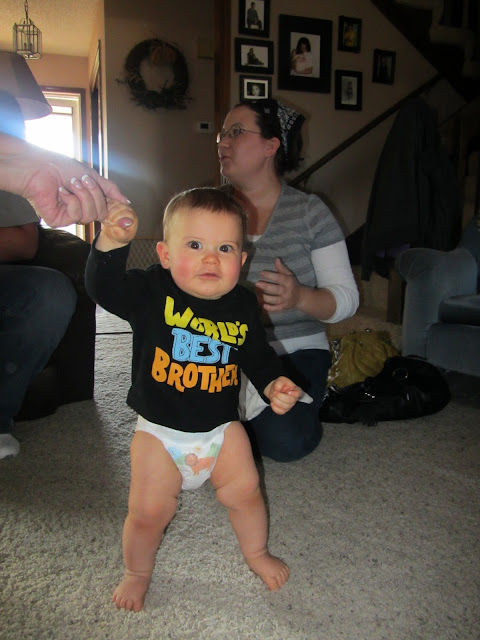 Here he was just learning to walk and just a few short months later (as you will see below) at his first birthday he was running all over the place! 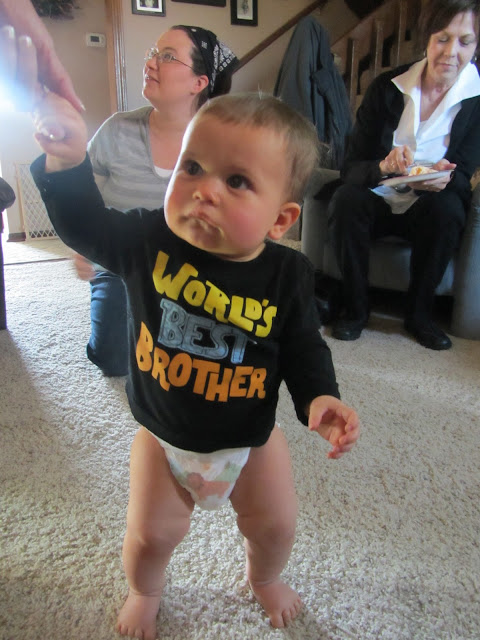 Now we are at Liam's first birthday party held at his house.  He took a liking to Ryan right off the bat.  We had just entered the front door and he was already all over Ryan.  I like to blame his preference of Ryan over me on his height.  Liam just likes to be up high apparently.  ;) 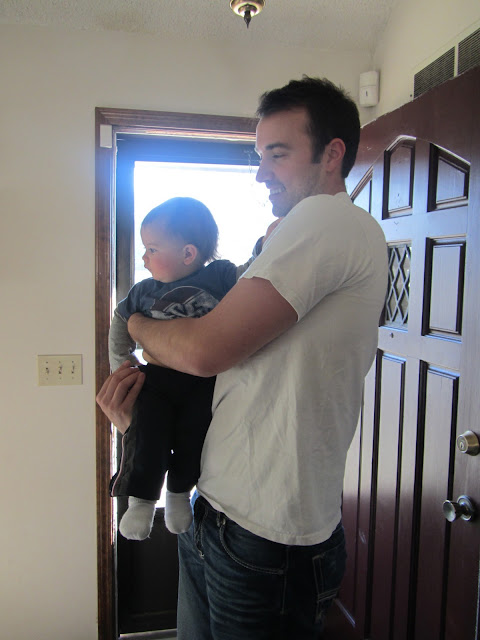 It was so funny to watch Ryan with him.  He didn't really know how to hold him at first. Ha!
But then he got the hang of it.  As you can see by the delight on Liam's face. 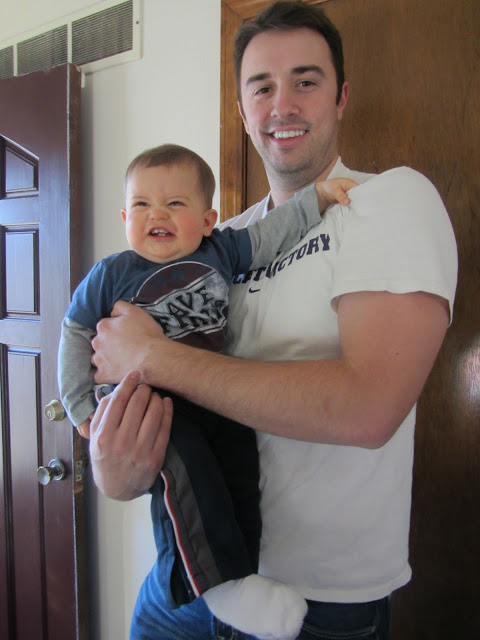 They were just so cute together I had to post a bunch of pictures of them. 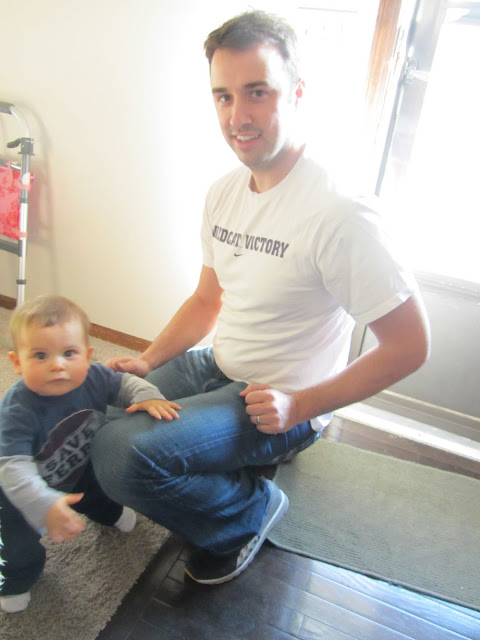 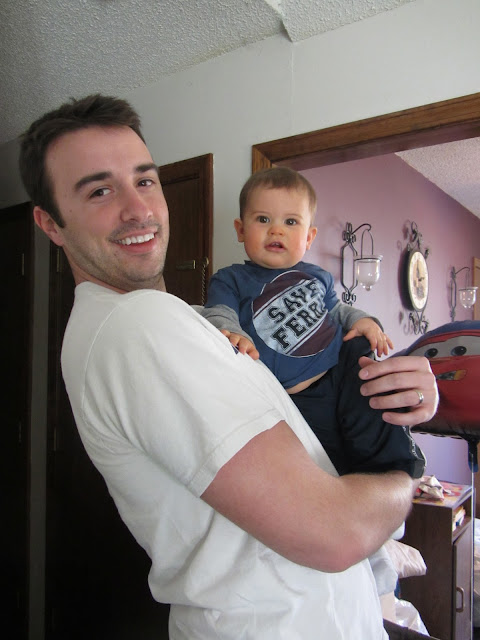 Liam opening his presents with his dad and older sisters standing by ready to get in on the action. 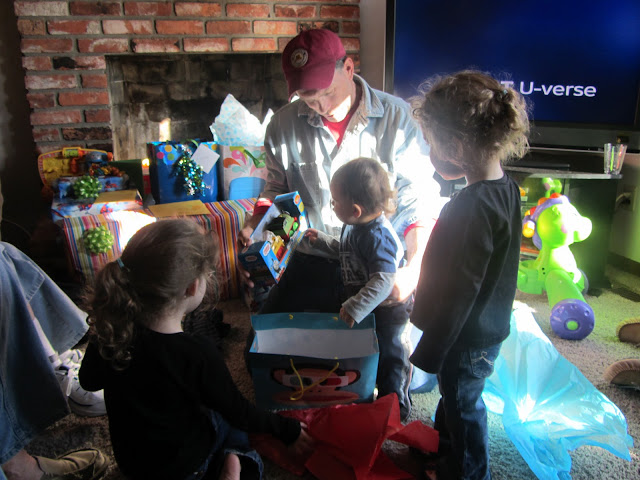 He was pretty good at it too! 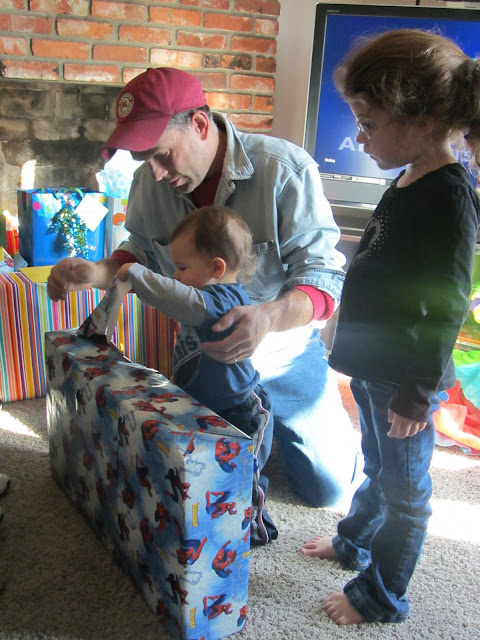 Letting his tummy hang out wild and free. 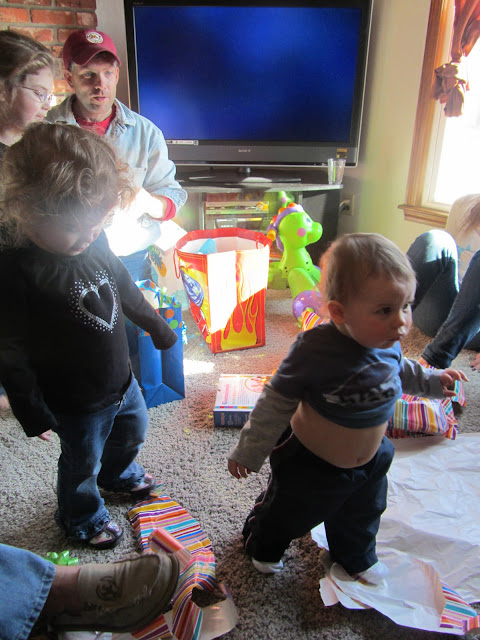 Next up was the infamous cake feeding destroying! 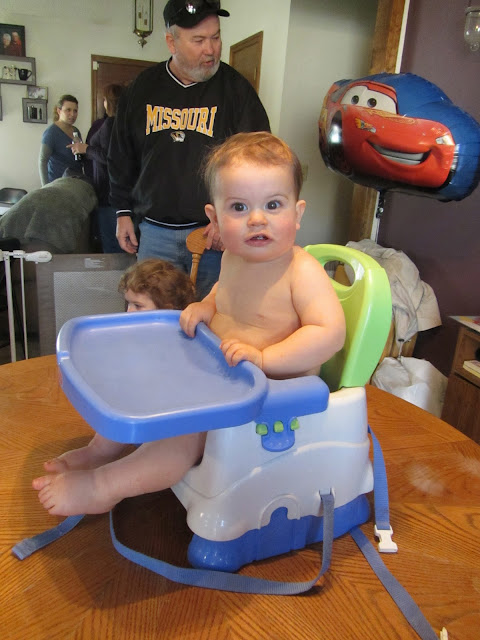 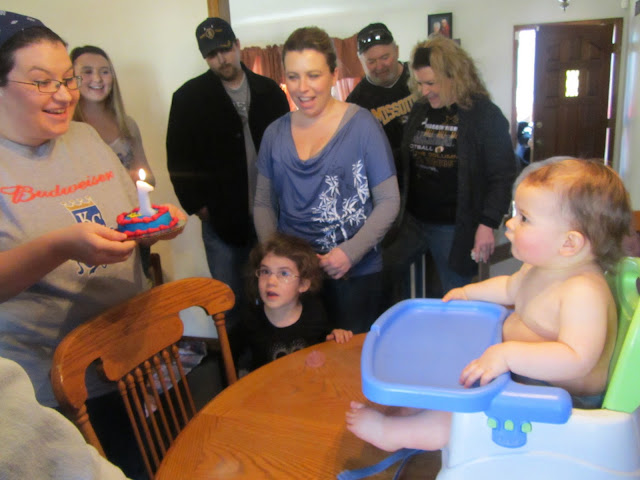 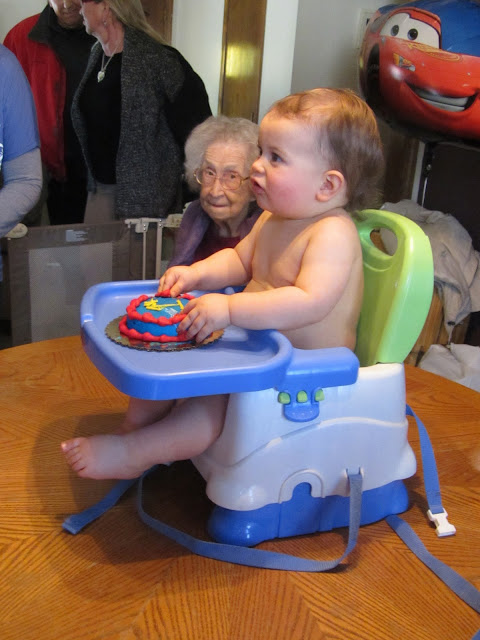 Deciding what he thinks of it... 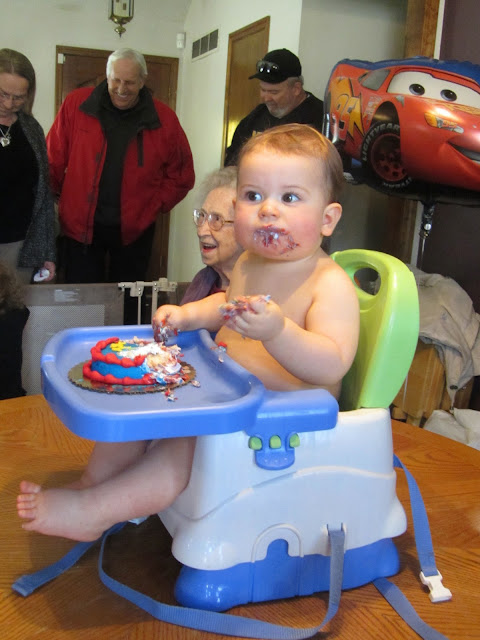 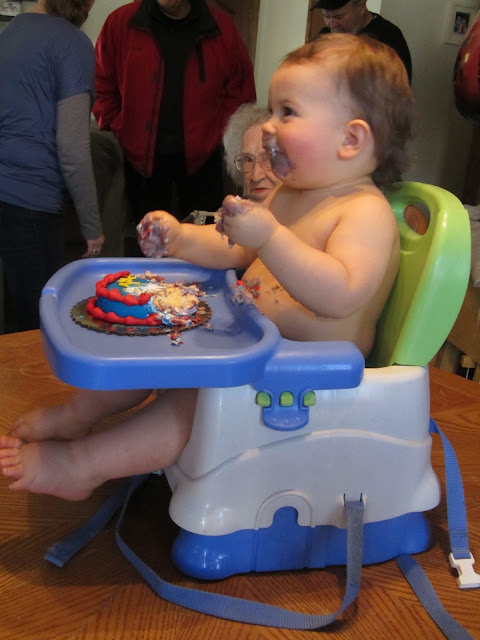 Enjoying it so much that the icing went from red & blue to purple!  Just look at those chubby arms.  How can you resist? 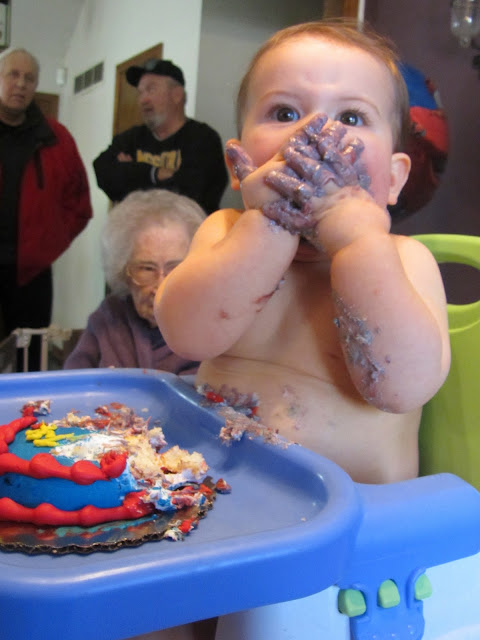 Liam had a lot of fum squishing it between his fingers and clapping his hands flinging it in several different directions.  But he did manage to get some in his mouth.  :) 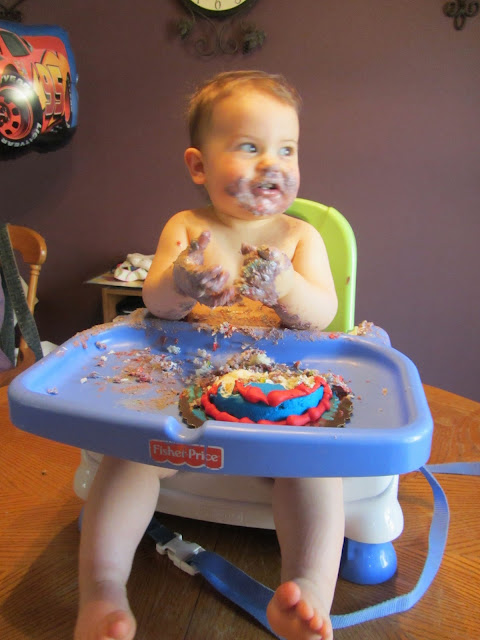 I love going to kid's birthday parties.  It's so fun to see their excitement and bring back fond memories as a kid.