A couple of weekends ago, a few girls from church and I had a shower for our friend Melissa at my house.  Melissa is pregnant for the first time and due in August with twin girls!  I thought this shower had to be extra special for her since she is now on bed rest and had to get permission to even come.  I was so worried that she may not even be able to come to her own shower!
Carly came up with this awesome shower invite based off the colors of Melissa's nursery.
(I blacked out the address.) 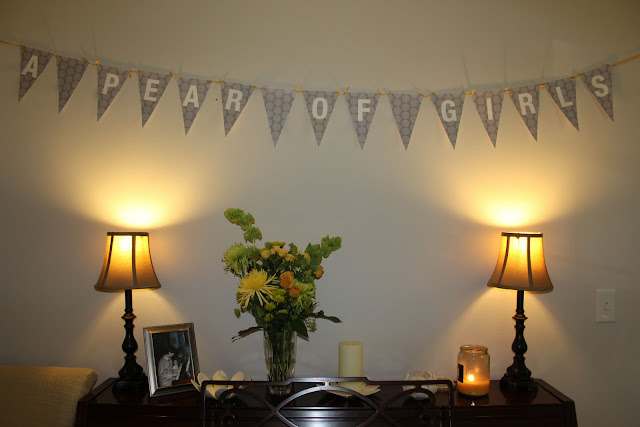 My friend Victoria made most of the adorable decorations that I ordered through her etsy shop.  You have to go check it out!  Seriously the cutest party stuff ever!  Click here to visit. 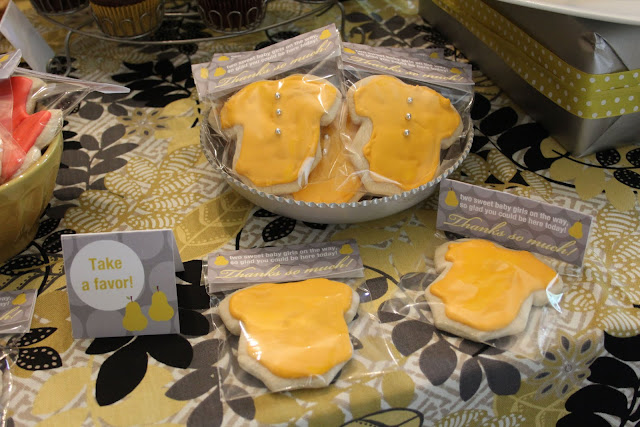 Victoria made the bags and I made the cookies for favors. 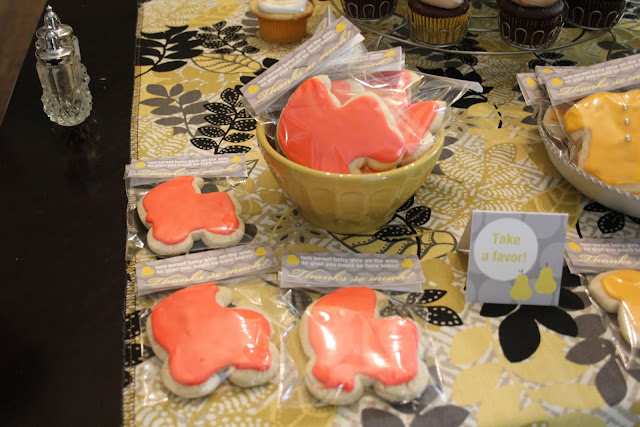 I loved the toppers on the cupcakes I made! 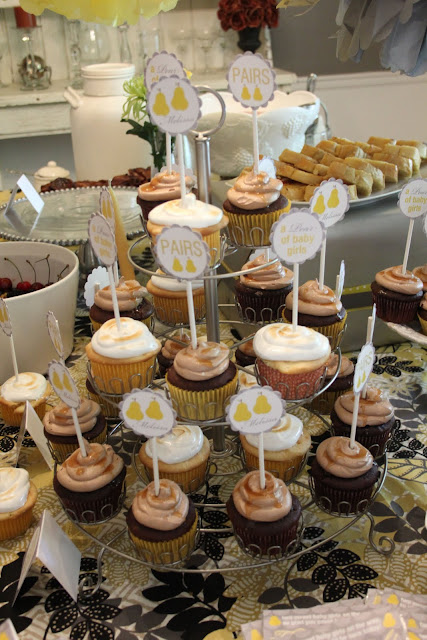 Pictures of the table setup. 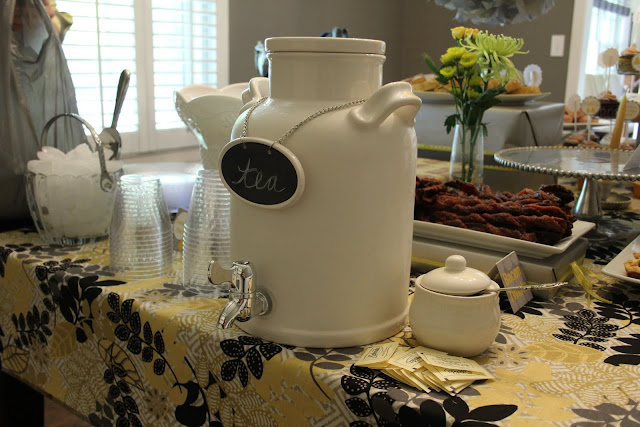 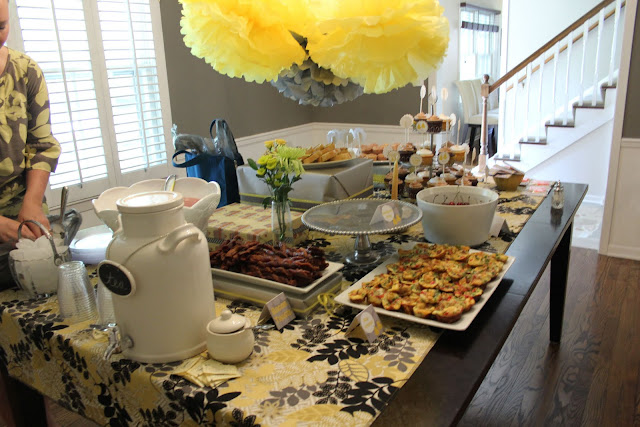 The shower colors were yellow and grey like Melissa's nursery.  I decided tissue puffs were a must for any shower.  I used this tutorial to show me how to make them. 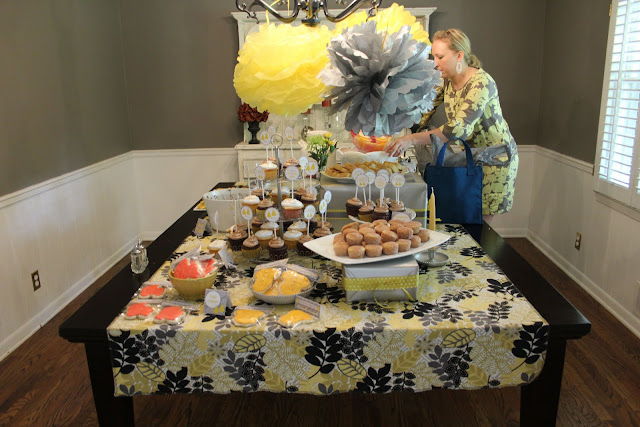 Kara came up with this great idea to make a pear tree and have people write encouraging things for Melissa on them. 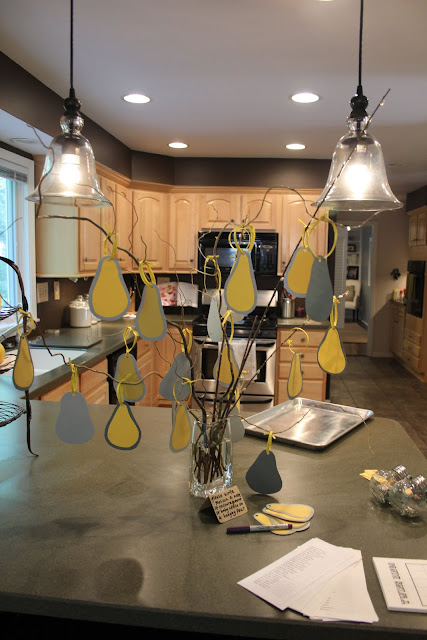 You can sort of see the handmade bassinets that our friend Carly made for the baby girls in this picture.  Is she not freaking amazing?? 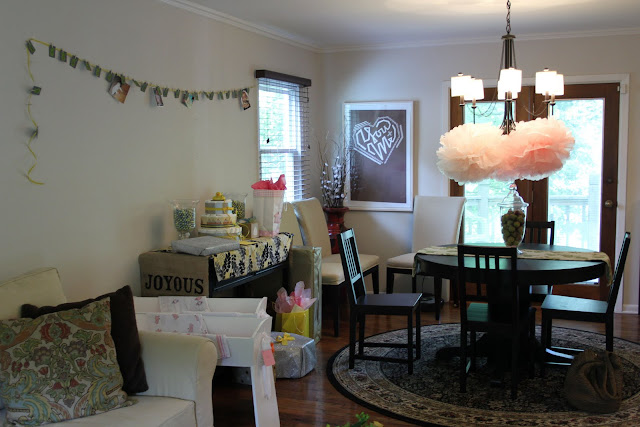 Kara also made little yard markers to lead everyone up to the door. 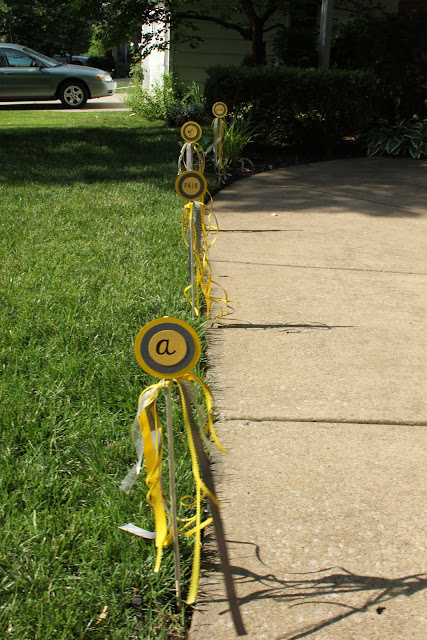 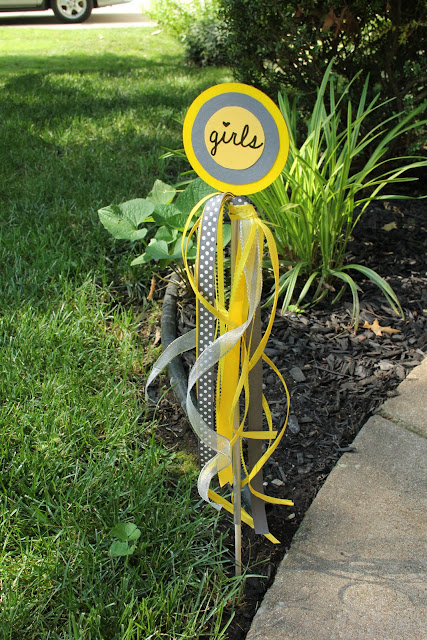 On the shower invitation we asked everyone to bring a baby picture of themselves.  Then at the shower we had a game that people had to figure out who's baby picture was who.  It was a lot of fun even though not everybody remembered to bring a picture. 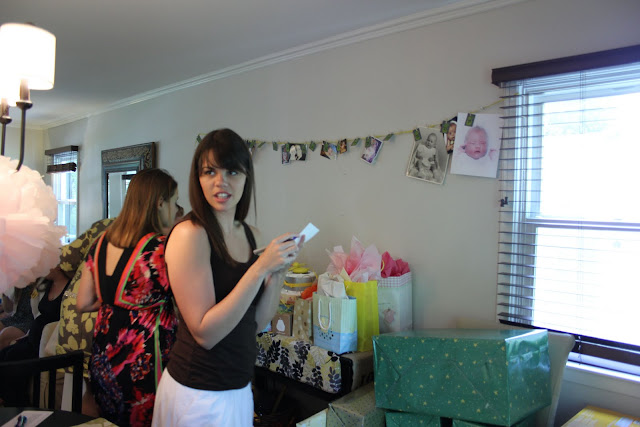 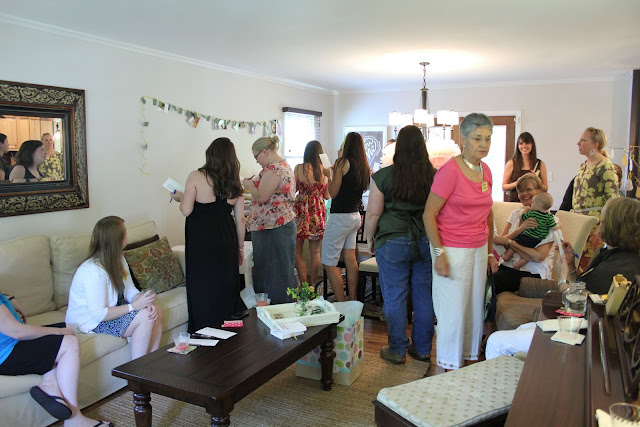 The other game we played was Bingo.  Everybody filled out their own Bingo card with what they thought was in Melissa's presents and their freebie space was the gift they brought.  Whoever won the two games got to chose one of the flower arrangements around the house. 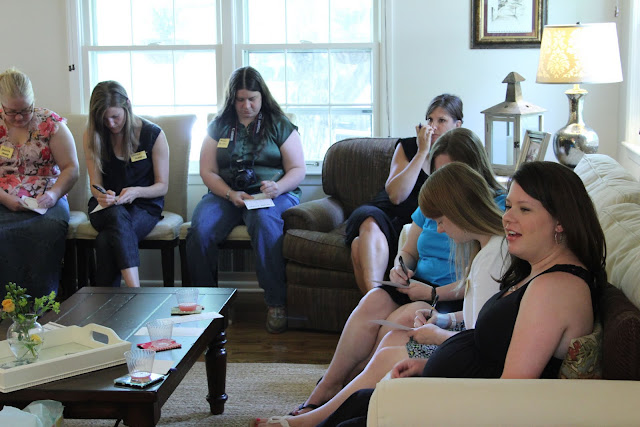 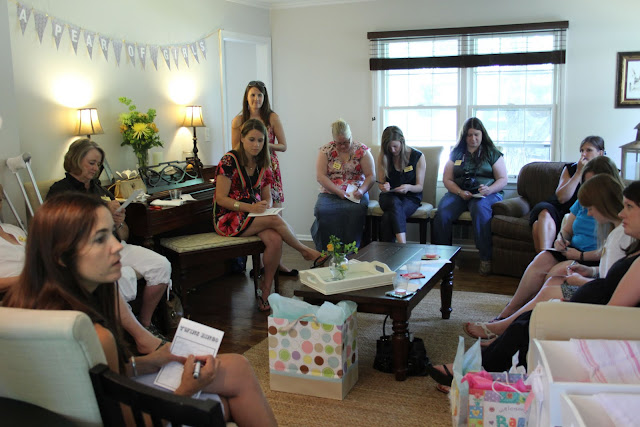 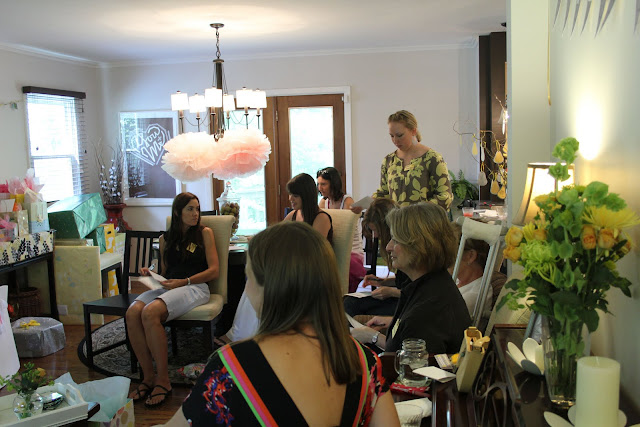 Then it was time for opening the presents!  We had cute thank you cards made for her and had everyone write down their address on the envelopes so she wouldn't have to look all that information up. 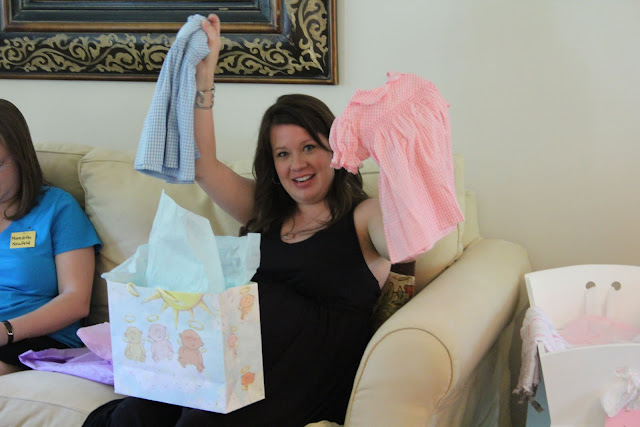 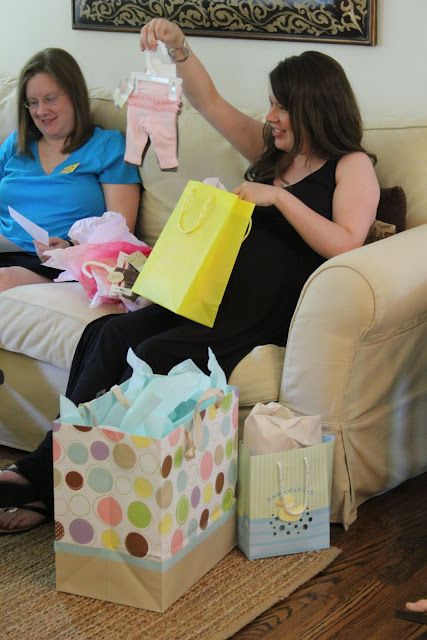 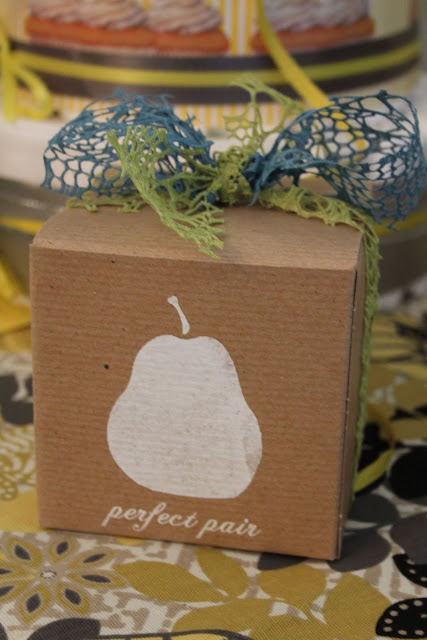 I love diaper cakes!  Kara did such a good job on this one. 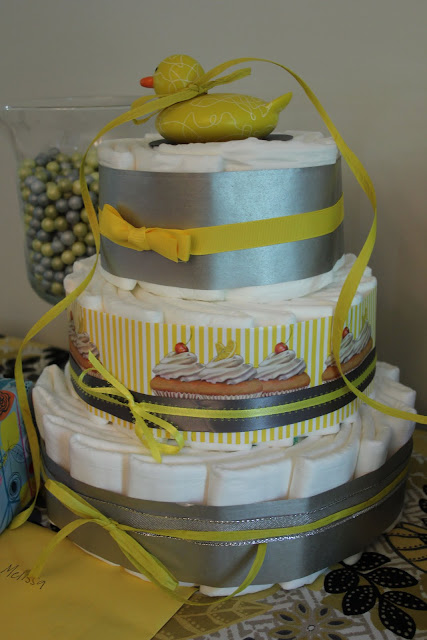 Melissa got so many cute gifts. 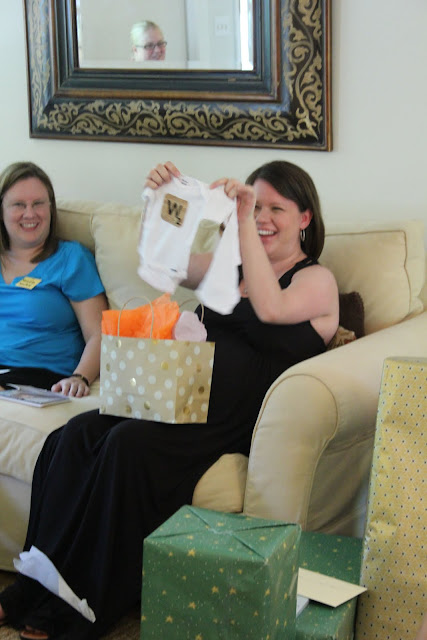 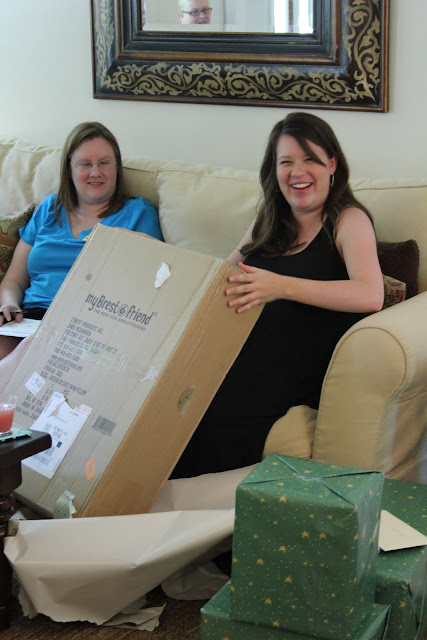 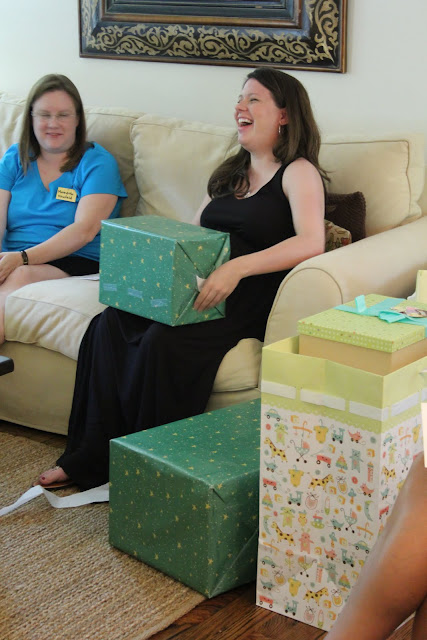 Melissa's sisters live out of town but where able to come visit her the weekend of the shower.  It was perfect! 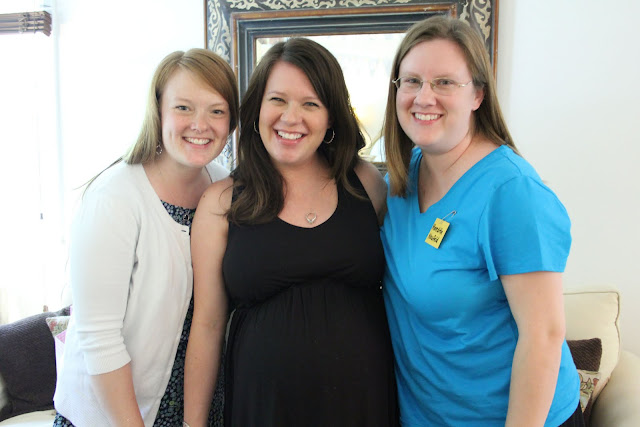 All the lovely hostess's (with Melissa) that helped out with food and organizing this whole shindig. 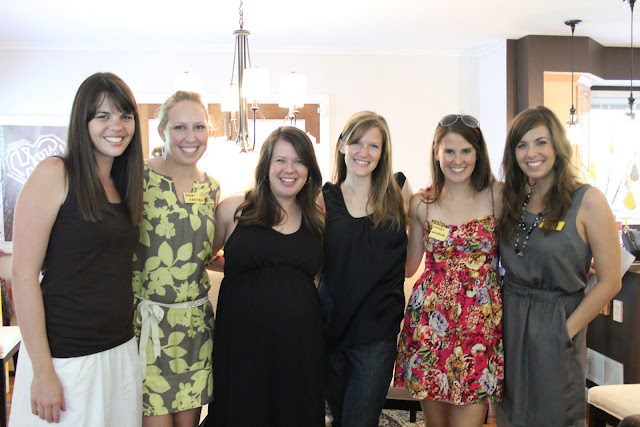