On Friday, the day of our anniversary, we flew into Chicago in time to check into our hotel, shower and make it to our dinner reservations.  Ryan had been raving about a restaurant he'd eaten at on a business trip and thought it would be perfect for my food taste. :)  We ate at an amazing steak & Italian restaurant called Carmine's.  If you are ever in the Chicago area I totally recommend this place!  It was melt in your mouth goodness.  Ryan had the lasagna and I had their homemade noodles and meat sauce.  Mmmmmm..... 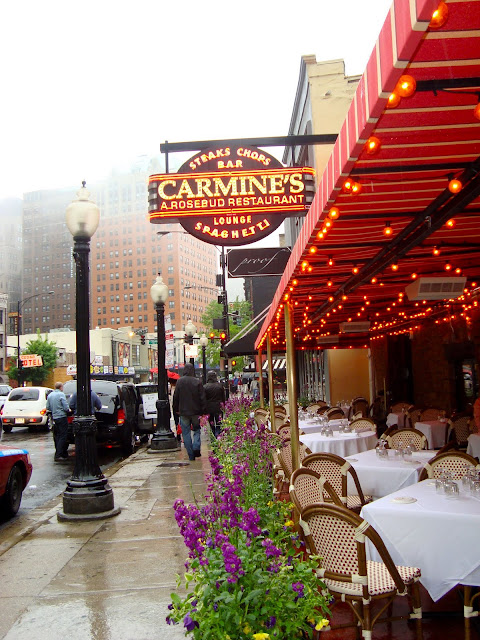 (Do you see the low clouds on the builds??)
Saturday it rained off and on but on Sunday it poured for a good chunk of the day.  It was a slight bummer but we made the most of it by buying ponchos and umbrellas.  We basically played in the rain like we were school children. Ha!
I'm going to dedicate the rest of this post to Millennium Park, because it deserves a whole post.  We stayed within a few short blocks of this park and I'm so glad we did.  Ryan & I had a blast exploring and finding unique artwork throughout.  There were these fountain sort of buildings called the Crown Fountains.  They are two buildings facing each other that have water running down them and faces that spit out water.  All the kids play in the water in between them. 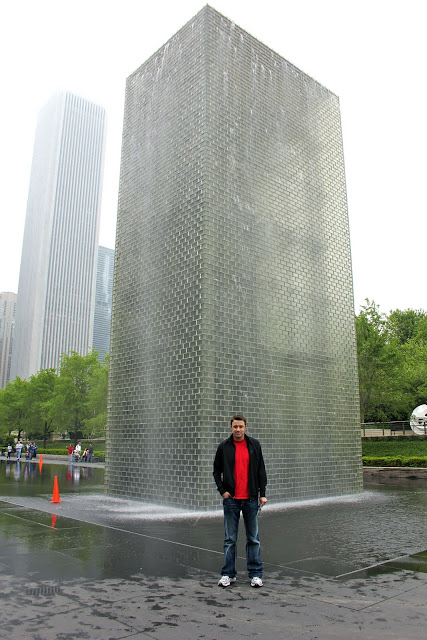 One of the faces.  Kind of creepy but kind of cool. 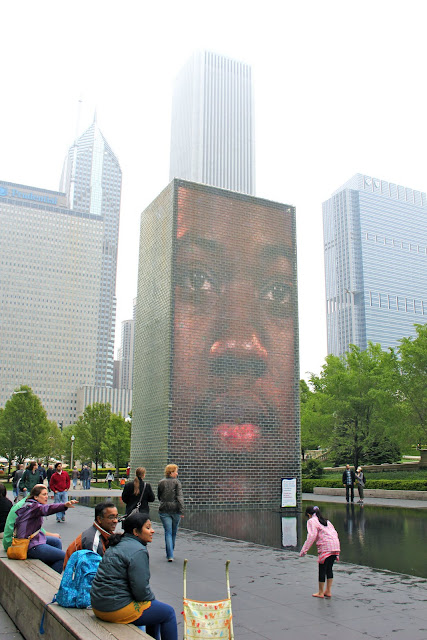 There are sculptures placed throughout the whole park. 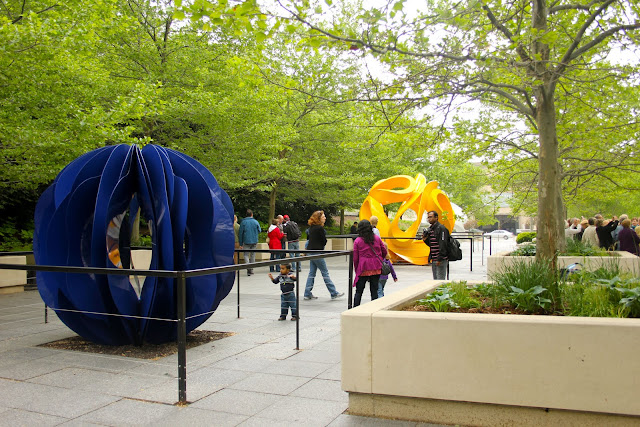 It's fun to turn the corner and find something you weren't expecting. 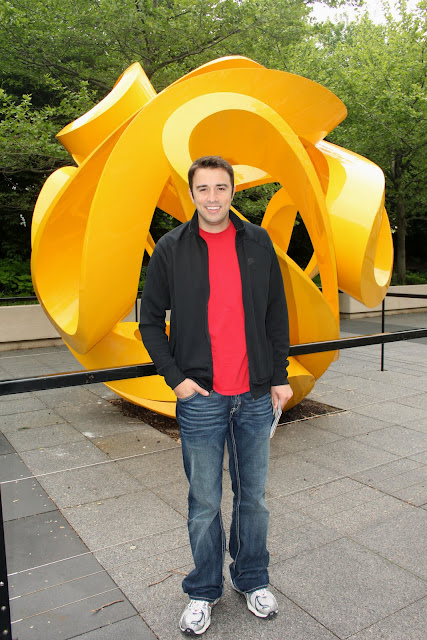 Of course we had to visit the famous Cloud Gate a.k.a. "the bean".  Apparently it was just built in 2006, and I've seen everyone that visits Chicago taking their picture in front of it.  It's really a fun thing to visit nestled in the middle of downtown. 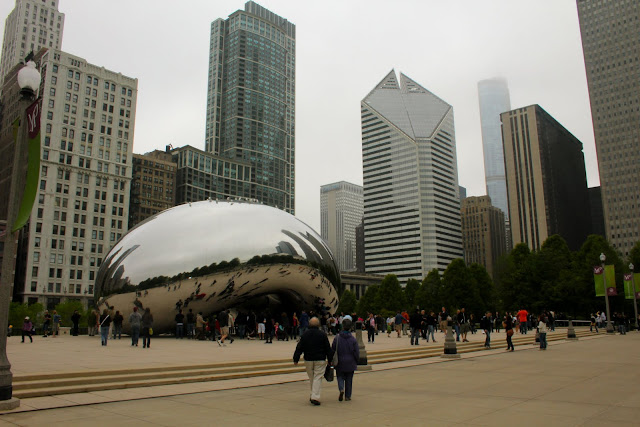 Short video of "the bean".
The following pictures are of having fun with reflections in "the bean". 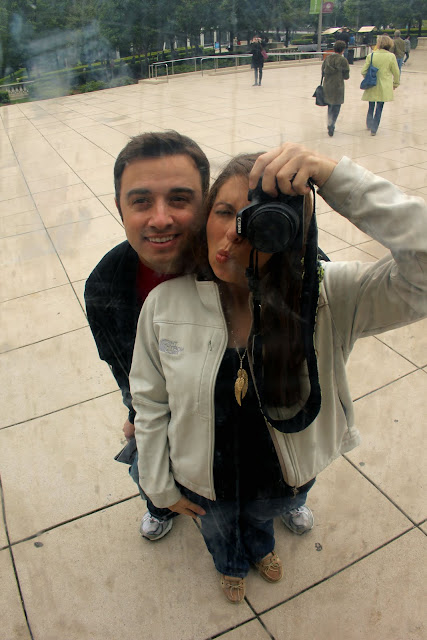 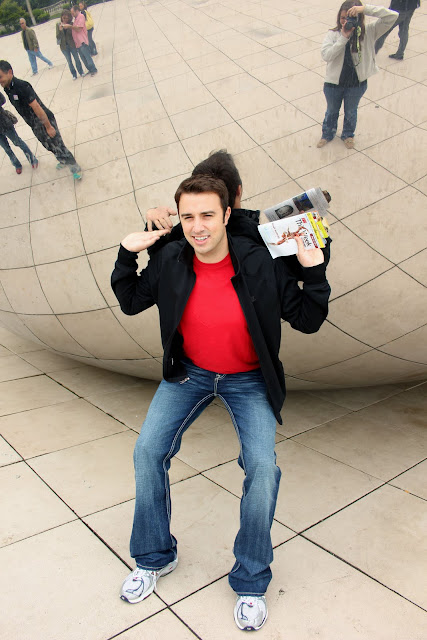 It was sort of dirty. Oh well. 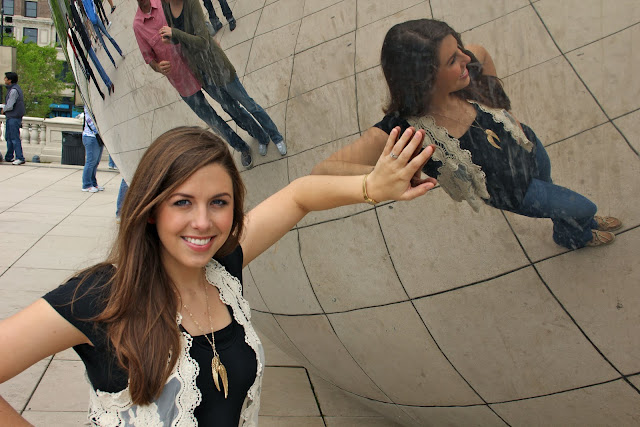 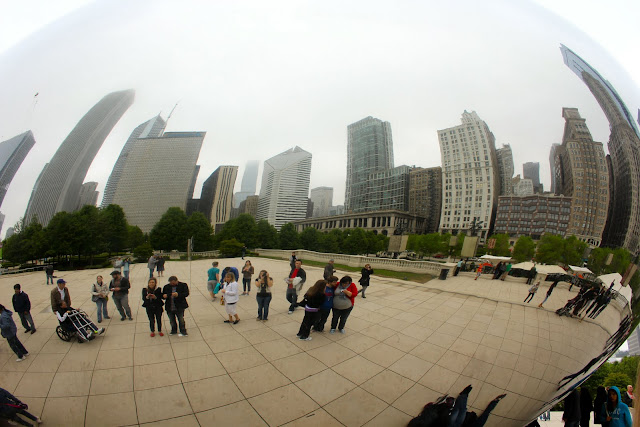 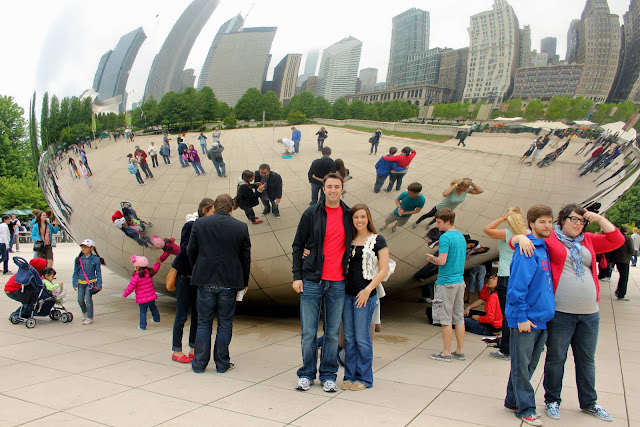 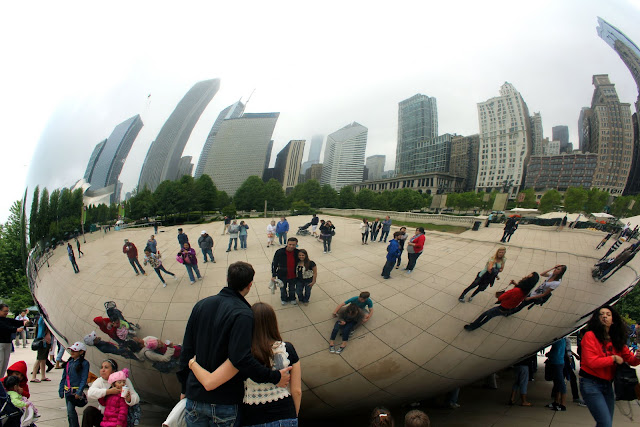 In the middle of Millennium Park is this grand pavilion that houses all sorts of concerts and events.  It's called the Jay Pritzker Pavilion.  I have a few more pictures of it down below. 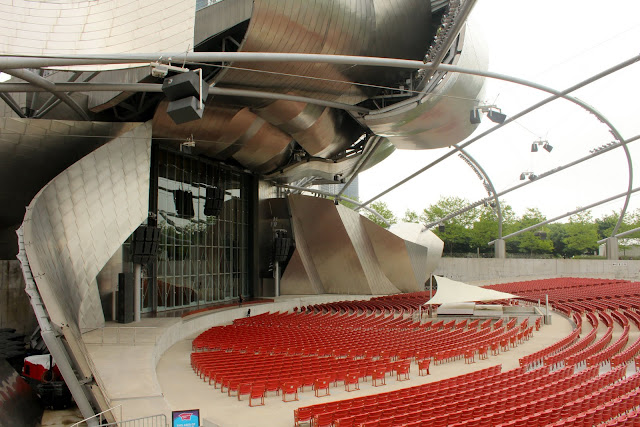 There is also this sort of "secret" garden that is in closed by these huge bush/trees.  You can see the contemporary art museum in the background. 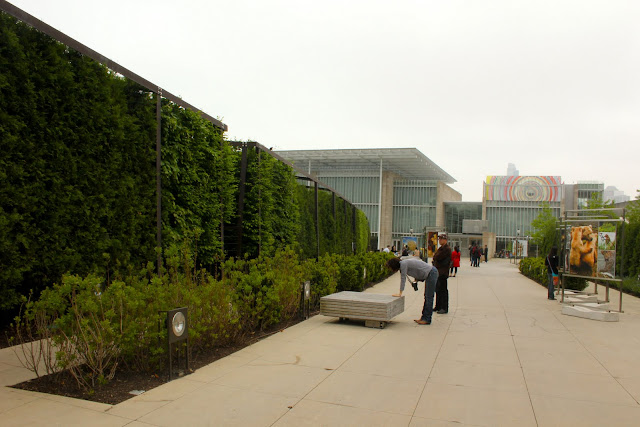 Ryan really liked the benches and thought it would make a perfect coffee table.  He was pretty sure he could replicate it so this is him trying to figure out the measurements.  Ha! 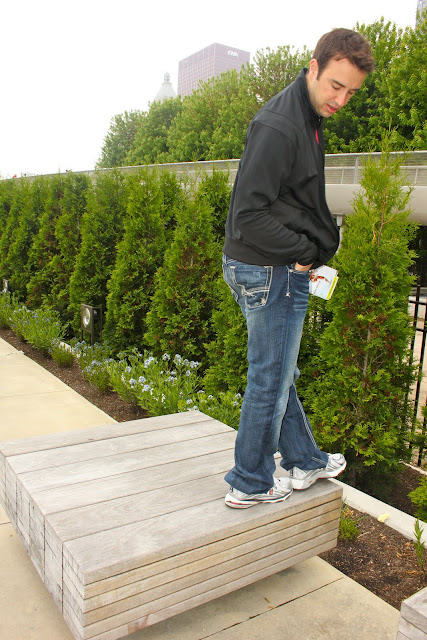 Once we entered the garden (which is called Lurie Garden), Ryan took over the camera and tried to get artistic on me. :) 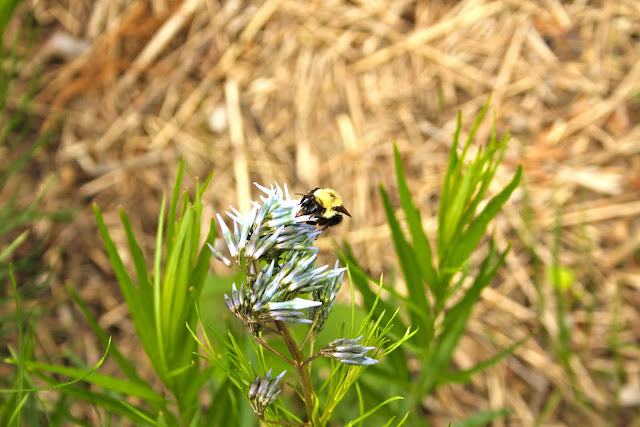 Don't you think this is a great shot of the bee??
Can you imagine this in full bloom? 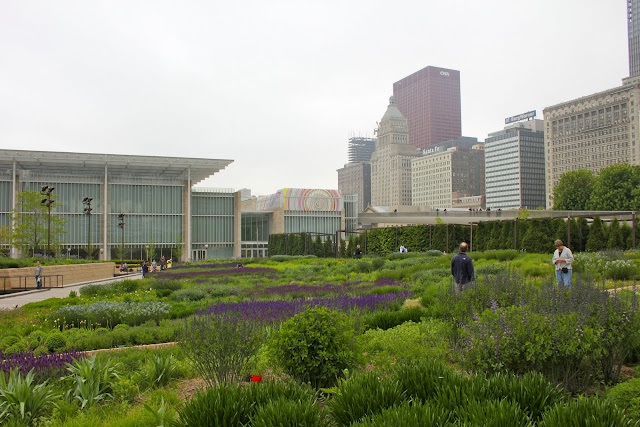 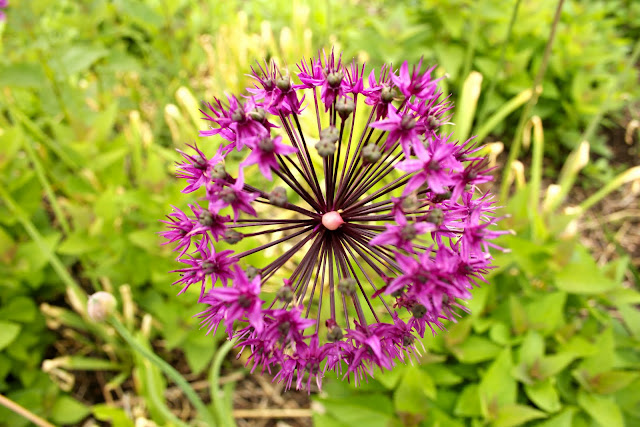 More photos of the Jay Pritzker Pavilion from a different angle. 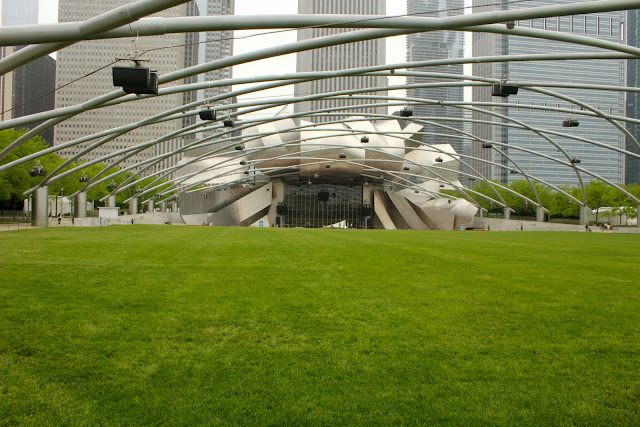 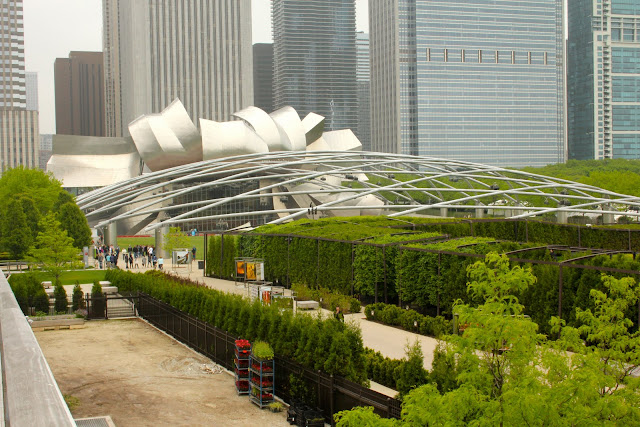 This park is definitely a must see when visiting Chicago.  One or two more posts to come of our anniversary trip!