We are celebrating an incredible woman's life tomorrow, Georgia May Ebright. 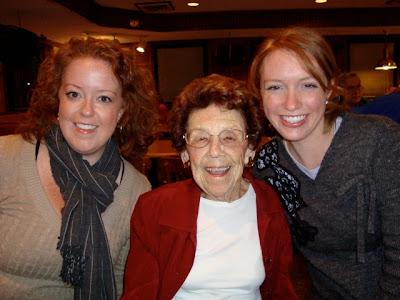 Georgia passed away last Friday surrounded by family at the age of 93.  She lived a long abundant life, and had 5 children.  Can you believe she was still living by herself and driving??  She's incredible. 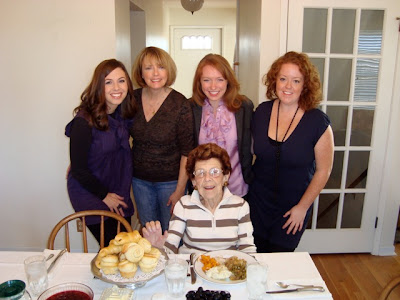 A week or two after Thanksgiving, she fell in her home and broke her hip. She was transported from her small town to a suburb of Kansas City to be closer to family. There were times we thought she would fully recover over the past few months but we knew she was ready to go. Georgia was missing her husband and wanted to be with him again. 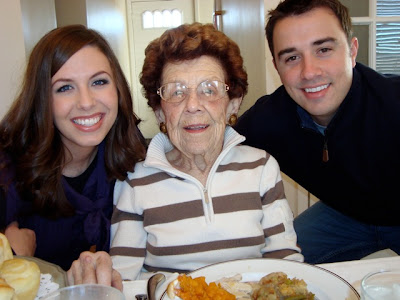 I was such a delight to know this woman.  She was ornery (I know where Ryan gets it from!), liked intelligent conversations and loved the farm.  She was always so proud of her children and grandchildren.  They were her world. 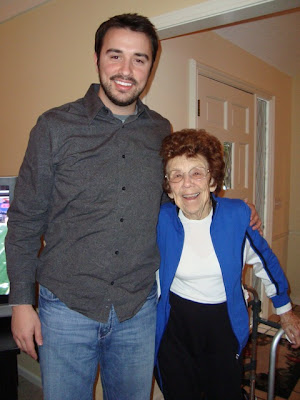 She definitely had a special affinity towards Ryan.  Who could blame her? :) 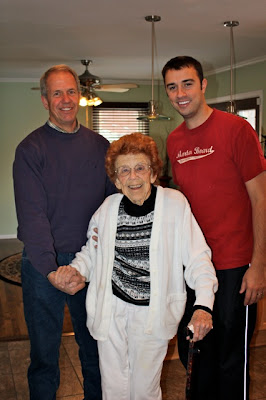 This was the last picture I took of her this past Thanksgiving.  I'm so glad it was her son Harlan & grandson Ryan.  She looks so happy.
Georgia May Ebright
LYONS - Ebright, Georgia May, 93, passed away Jan. 21, 2011 at the Villages at Jackson Creek in Independence, MO. She was born on March 2, 1917 in Toronoto, KS to Cornelius and Blanche (Bolton) Foster. She lived in Lyons, KS since 1941 as a homemaker. She graduated from Geneseo High School and Emporia Teacher College. She was a member of the United Methodist Church, the Worthwhile Club, Rice County Historical Society in Lyons, was chosen as a Master Homemaker, and was a former Gray Lady at Lyons District Hospital, She married Forest Wendell Ebright on Nov. 10, 1941 in Geneseo, KS. He preceded her in death on Octy. 21, 2001. Also preceded by a brother, Harlan Foster and a sister, Mary Carr. Survivors include 2 sons, Harlan Ebright of Lyons; Alan Ebright of Wichita; 3 daughters, Beverly Brejcha of Independence, MO; Evelyn Ericson and Elaine Patterson, both of Blue Springs, MO; sister, Christine Zouzas of Ellsworth; 13 grandchildren; and 6 great-grandchildren. A memorial service will be held 10:30 a.m., Saturday, Jan. 29, 2011 at the United Methodist Church in Lyons, with burial to follow at the Lyons Municipalol Cemetery. Memorials may be sent to the Methodist Youthville or Lyons Public Library in care of Birzer Funeral Home in Lyons, who is handling the arrangements.