Do you know what Sold Out Swift means?? It means I got to go to the Taylor Swift concert here in Houston that was sold out! It was completely random how it happened too. I am a fan of Taylor's but wouldn't necessarily spend the money to go to her concert.
Well, the day of the concert one of my coworkers ask me if I would be interested in being a seat filler. Apparently my coworker's friend is working/doing something on Taylor's tour. I can't remember the name of what she does. It just so happens that they were taping this is one and only concert. So, this friend needed need seat fillers so that there wouldn't be an empty seat on the video. I wasn't sure what that meant since it was a sold out concert. None the less, I was up for an adventure and a free concert on a Wednesday night. So were a few other coworkers as well.
I decided I needed to document everything so you all would know what a seat filler was. :) Unfortunately, I brought my camera but forgot the memory stick! Boo!! So all of these pictures are from my camera phone which isn't the best quality.
There ended up being a decent size group of us that got to go, and we made our way to the Toyota Center together. I felt so special because we got to go into a side door that somebody let us in and wait in this little hallway to get our instructions. There had to have been around 75 people or more that were all doing the same thing we were.
Autumn was the one with the hooked us up with this sweet opportunity. 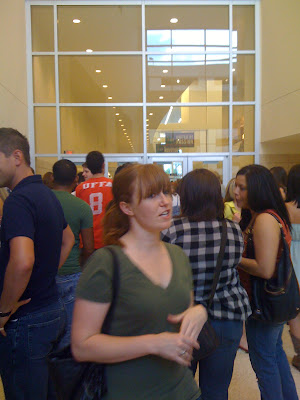 Then a couple of people came out to tell us to line up to get our stickers with numbers on them. That way they could keep track of us. These are my friends Brittney & Laura Lee showing their stickers off. VIP!! 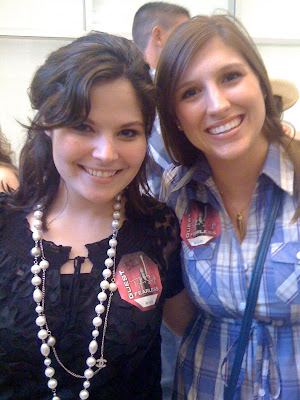 I was not prepared to go to a concert that day, and I was so not dressed cute!! 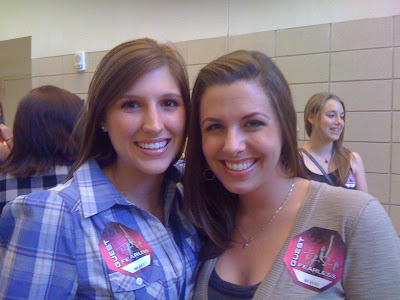 They gave us free light up stick things so that they glowed in the dark and looked cool on camera. They changed to all different colors. I get excited by the little things. :)
Brittney & Autumn 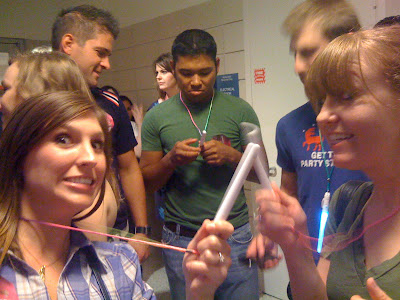 I think Brittney wished they gave us more of them! 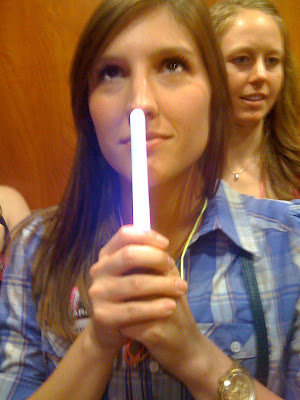 We got to go backstage to avoid the crowds. Shannon's excited! 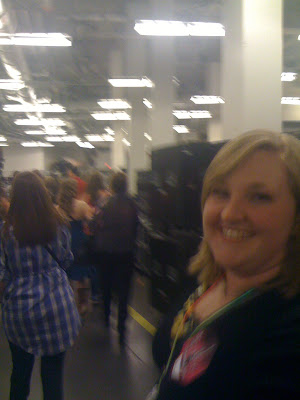 This was the room we got to hang out in while we waiting for the opening bands to perform. They called it the bullpen. :) It was pretty nice! 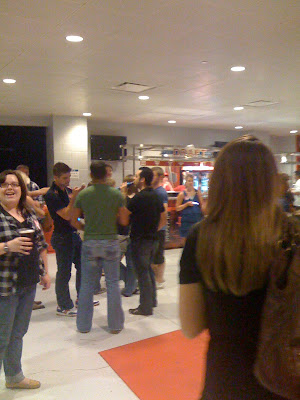 Passing time and playing with my light up toy. 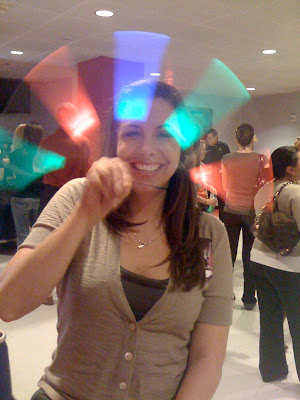 Shannon (on the right) with her two friends she brought. 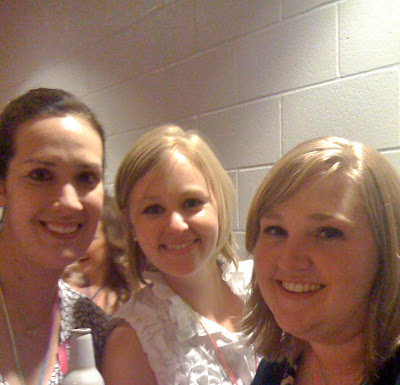 So basically what happened was, as soon as Taylor started performing the concert workers looked for open seats to sit us in. The people that had the seats may has just gotten up to go to the bathroom, or gone down by the stage or just never showed up. So the concert workers would put us in the empty seats and if the owner of the seats came back we would just get up and find another empty seat. I kind of thought we would be moving around all night.
We were hoping that we could stay together but weren't sure we could. Luckily, there were 10 open seats next to one another and we got to sit together! AND they were three rows up from the stage on the left hand side. AND nobody ever came to claim them!!! How amazing is that?? I got free third row tickets!!! 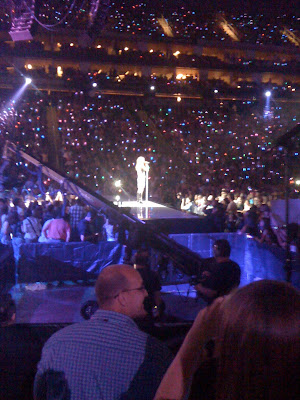 You can see the big camera that was flying around and the people surrounding the stage.
My camera just doesn't do it justice! Can I just tell you that Taylor's hair is so freaking gorgeous! 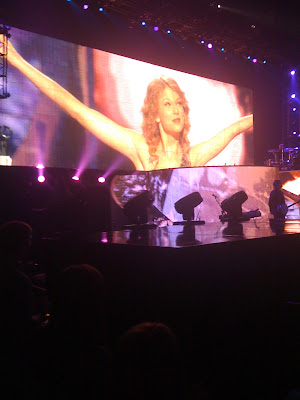 This pic gives you a slight clue how big this arena was. HUGE! 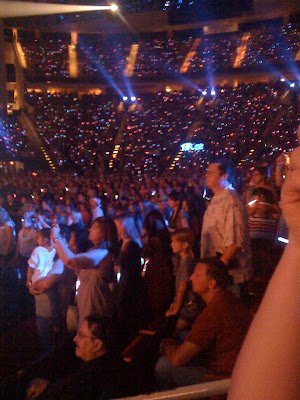 Look how close we were!! 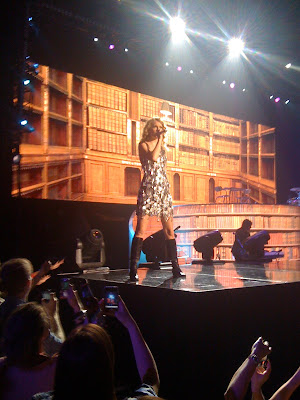 Taylor really gave an amazing performance, and I knew most of her songs. She had a lot of dialogue, wardrobe changes, set changes and little skits. It was a blast. The stage was so cool. This was a pic from when they turned it into a castle. 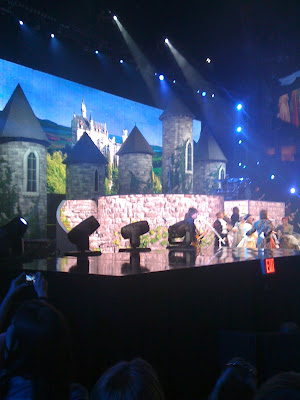 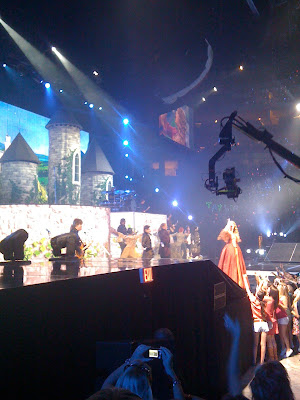 Taylor played her guitar and the piano. I had no clue she wrote her own songs! I think this talented girl will be around awhile. 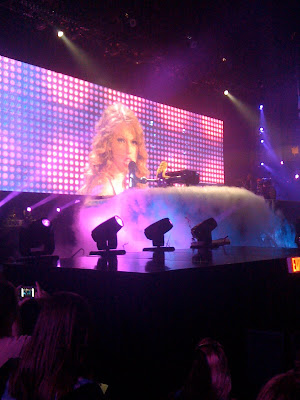 The finale with confetti blown everywhere. I'm glad I wasn't asked to be part of the cleaning crew! 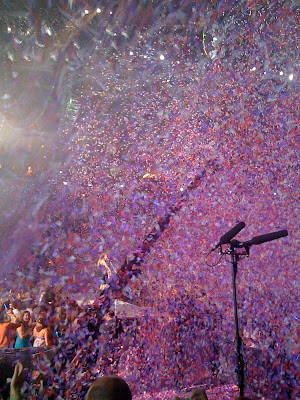 It was one amazing, random night that I will not soon forget. If you ever get the opportunity to do this, jump on it!! I had no idea that our seats would be that close.