My friend, Shannon, from work hosted a fabulous Tacky Sweater Christmas Party last weekend. Believe it or not, I didn't seem to have one of those laying around. I thought for sure I would find one at Wal-mart but when I didn't, I was too lazy to go anywhere else. So I compromised with a somewhat tacky sleep shirt. I wore leggings underneath and these long red & green Christmas stockings but you can't see them in these pictures. I also wore ornaments for earrings and a bow on my head band. Good enough, right? Ryan refused to let me find him a tacky sweater because he told me he already had one. He called it his snow flake sweater.

You tell me. Do you think Ryan's sweater is tacky?? 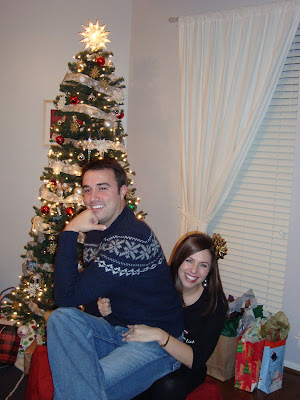 We did group pictures in front of Shannon's gorgeous tree. Not sure what is going on in this picture. 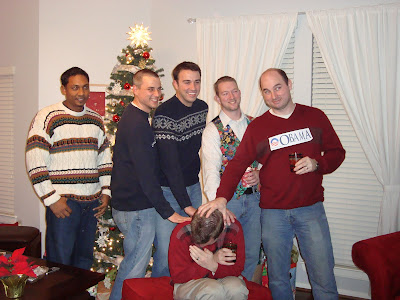 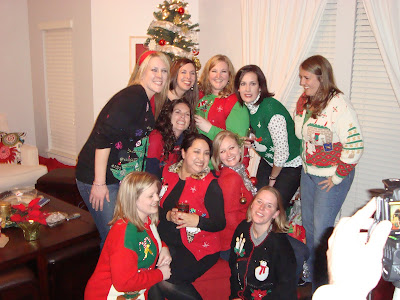 This was really the only shot that you could kind of see my sleeper in. :) I have to admit I was pretty comfortable. 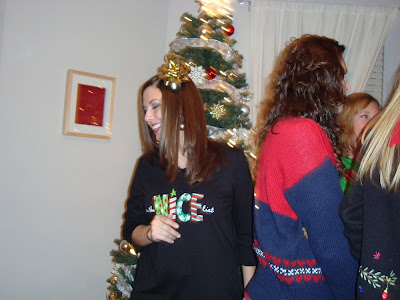 Tacky sweater parties are so much fun! If I go to one next year I will be more prepared with a true sweater and not an over sized t-shirt. We had a blast even though Ryan & I didn't really know anyone besides the host. Shannon also hosted a Secret Santa and we made out of there with a DVD and a gift card to Nordstrom. The hot item of the night was a snuggie. I think I might have to get one!