Ryan & I arrived in my home town of Kansas City Wednesday morning. It was very early flight so it pretty much wiped us out for the day. We did get to spend most of the day with Ryan's best friend, Miles, who lives in Ohio. The last time we really got to spend any time with him was about a year and a half ago!! Miles originally had a flight the same day we arrived but was able to change it to the next day.
Our first priority when we got into town was to eat lunch at one of Ryan's favs, Mongolian BBQ. I have to admit it's pretty delicious.
Miles & Ryan (my mountain man) 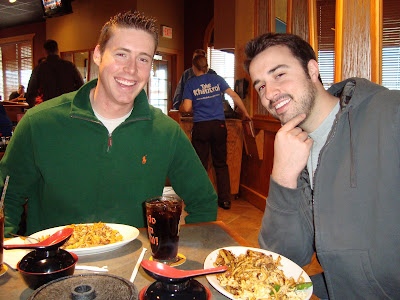 After everyone was so full we could barely move, we headed down to the Plaza. This is one of my absolute favorite places in Kansas City, especially during the holidays. The rest of the afternoon was spend shopping and bumming around. It's a whole heck of a lot colder in KC then Houston so I tried to duck into every shop I saw. Eventually we got hungry again and decided to eat at another staple in KC, Jack Stacks a.k.a. the best BBQ you have ever tasted!! It used to be called Smoke Stacks when I was growing up. I have a lot of fond memories at this place.
Miles & Ryan enjoying their mouth watering food. 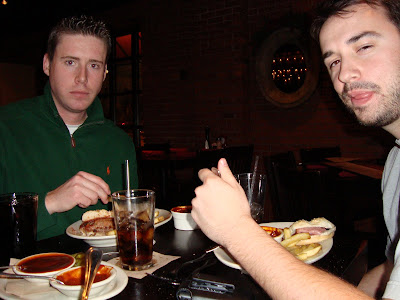 I love the ambiance at the plaza restaurant. 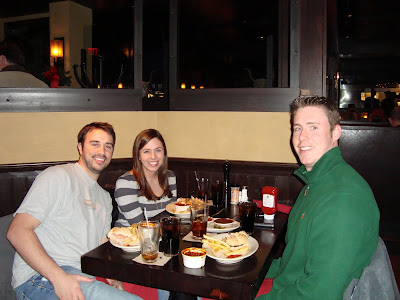 After dinner it was dark enough to take a few pictures of the plaza lights. 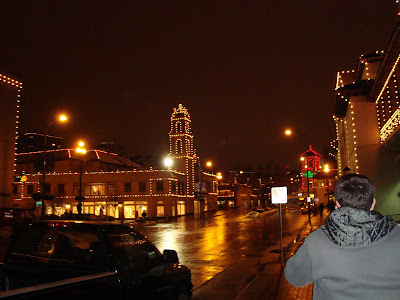 This place is magical at night. I might be a little bias too since this is where I got engaged. 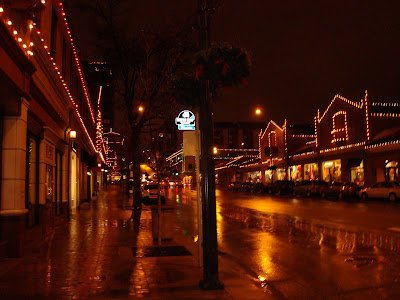 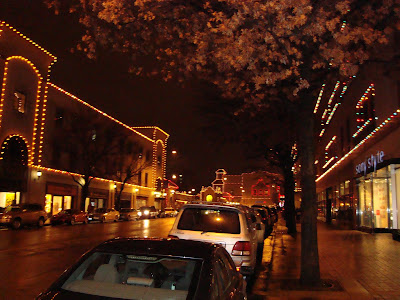 Then we headed over to Crown Center (another gorgeous shopping area) where some family is staying at the Westin (where the Pioneer Woman stayed). Ryan's aunt and uncle where in town from Florida for a special celebration. Ryan's uncle, Tommy, is Susan's (Ryan's mom) brother.
Tish, Susan, Tommy, Papa, Ryan, Me & Miles 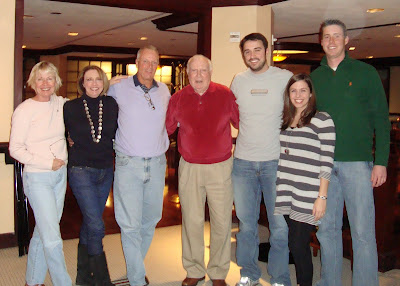 The special celebration that a lot of Susan's family came in town for a famous baseball player's 10 year wedding anniversary. They are renewing their vows over a three day celebration! You maybe wondering why Ryan's family was coming in town for that. Random fact about Ryan: He is related to this famous baseball player through marriage. I've never met him yet but Ryan has. The baseball player's wife is Susan's first cousin. I can't say his name on the Internet because of his privacy. I'll check with Susan if I can tell you about him later. :)