I thought it would be really fun to share my Christmas cards with you this year (since I already mailed them). This will be Ryan & I's fourth Christmas being married and fourth Christmas card together. I was VERY ambitious the first year. :) I made all my cards from scratch, and they were all a little different from each other. It took me days to finish. I even stamped the envelop front and back! That will not be happening again... Ryan even wrote a sweet Christmas letter about our first year together to include with our card.
2006 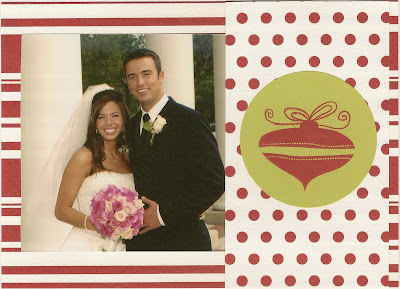 When I ran out of paper and still had people I needed to give Christmas cards to, I went to Wal-mart and made these. They were mainly for our coworkers.
2006 - Second Card 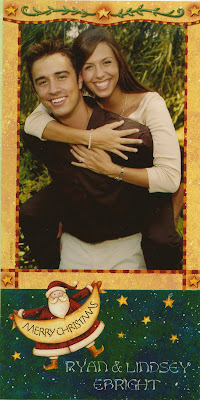 The next year I decided to go a simple as possible! I think I was still burned out from the first year. Ha! This year our big trip was to New York City as Ryan's surprise birthday gift. I couldn't decide between two pictures from the trip so I did a few of both. These cards were either made at Wal-mart or Target. This was the last year that Ryan wrote a Christmas letter for our family and friends. He went on strike after that. :)
2007 The next year I found a design I really loved from Stationery Style. It opens up and inside was printed, "May the joys and blessings of Christmas be yours throughout the year!". I absolutely loved it. Ryan & I had just moved back to Houston and bought our second house. So I thought it would be perfect to put picture of us in front of our new home.
2008 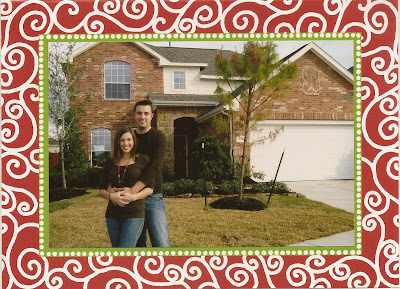 Again, I ran out of the ones I had ordered from Stationery Style. So I just popped over to Wal-mart to have some additional cards made. I think they turned out cute.
2008 - Second Card 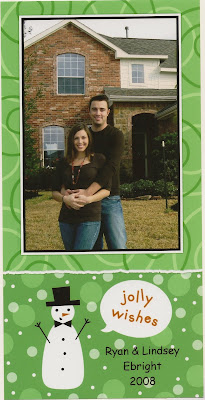 Finally, we are to this years! I broke the tradition of having two cards. :) However, you are probably going to choke when you read this... I ordered 150 cards!! I didn't want to run out again but I may have a few left over now. Does anyone want me to send them one? If so just let me know and give me your address. :) This year our big trip was to Italy with our family so I had to incorporate a picture from there. I couldn't find a picture I liked of Ryan & I. So I resorted back to an engagement picture. Ha! After I approved the design I remembered the pictures from my first Texans game! Oh well. This year A Piece of Pope made my cards, and she was so easy to work with and fast. Her designs are fabulous too!
2009 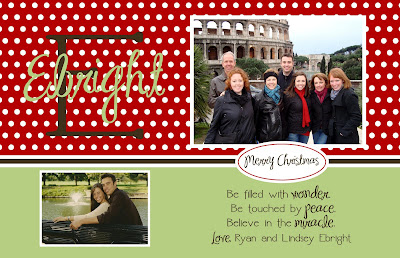 I also thought I would share with you where we keep all our photo Christmas cards we get every year. Luckily, I had kept all the cards we had received since we got married but I had no where to put them. My good friend, Lindsey, gave me this idea to just put them in a scrap book type album. Super easy! Now, every year I can pull this out and flip through every one's cards. It's such a sweet reminder of years past. Even guests like to look at it! 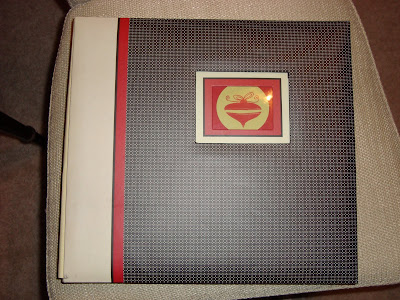 The inside is nothing fancy, but you could make if fancy if you want. I just used picture tape to attach mine to the paper. You all should really do this. You won't regret it. :) 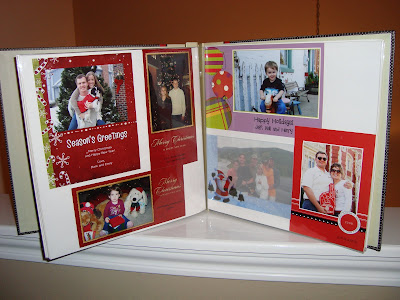 I want to see all of your Christmas cards so let me know if you post them!