After I shared with you that some of the Ebright's were on Richard Simmon's new workout video, I thought I should share the other "almost" famous moment that I've experienced.

Three months after Ryan & I started dating, he asked me to go to Los Angeles with him over spring break to meet his older sister. I had never been to LA at that point and really wanted to meet his sister. So we brought along our best friends to share in the LA excitement. Emily (Ryan's older sister) was so sweet and had so many fun things planed for us. One of which was to see The Tonight Show with Jay Leno. The extra special part about it was that Nick Lachey & Jessica Simpson (still married at the time) were guests on the show. I LOVED their Newly Weds show (I own all three seasons). Plus, LifeHouse was performing which is one of my favorite bands! PERFECT!

Needless to say, I was pumped out going to see this show. We got up super early to wait in line for tickets. I'm talking 3 a.m. We were towards the front of the line and indeed got the tickets. But then, you had to wait in another line and you weren't guaranteed to get in with your ticket! At one point the producers came out and scoured the line randomly calling people out to ask them questions. They even asked me some questions but apparently I wasn't energetic enough for them. However, Ryan & his best friend, Miles, were called out for questions, and they chose them to be a part of the show!!! Ahhhhh!!! So at that point they took us in to the green room to discuss what Ryan & Miles would be doing. They wouldn't give that much detail but just said Jay would be asking them some questions. I stuffed my face with the food and drinks, keeping my eyes pealed for Jessica Simpson. Eventually, they took us to our seats at the front of the studio and positioned us for when Jay would come talk to them.

Once the show started, we were all becoming increasingly anxious for their debut coming up. Eventually Jay comes over and asked them where their from and what they do. Then he had them go on stage to play a game. Ryan & Miles both had a basket of Easter eggs and they had to smash them on their heads to find the chocolate one. It was hysterical! They were smashing the eggs so fast that they didn't even realize when they actually got to the chocolate egg! Afterwards they gave them clean, black shirts to change into (Banana Republic ones I might add) and then also gave them The Tonight Show shirts with Jay's autograph and after the show we got to take a picture with him! He was so nice. I just love that guy. :) My FAVORITE part, besides watching my boyfriend smash eggs on his head, was being so close to Nick & Jessica! I didn't actually get to meet her. :( But Ryan gave one of the producers my ticket to have Jessica sign, and she did!!! It was the best day ever! 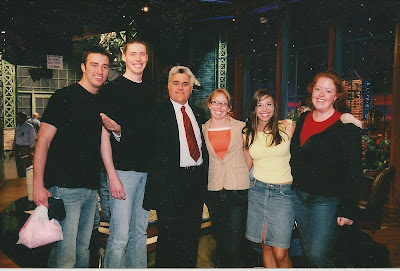 Afterwards, showing off their egg stained shirts in front of The Tonight Show sign. 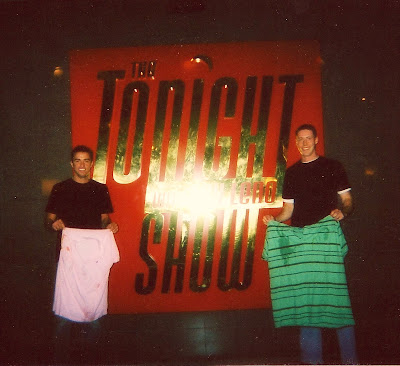 It was a once in a lifetime experience and I am so thankful that Emily had planned such a special day. I still hold the belief that the Ebright's are extremely lucky people!! Stuff like this would NEVER happen to me. We do have the video from the show but I couldn't figure out how to put a clip of it on here.