Last week was "Miles" birthday... get it??? I didn't have a chance to get a post up for him so I am doing it now. Better late then never. :) For those of you that don't know Miles is Ryan's best friend. They've known each other almost their whole lives because they grew up in the same town and went to school together. I have proof of their friendship when they were youngin's on video. And yes, Miles had a mullet. Sorry Miles! I couldn't lie!! 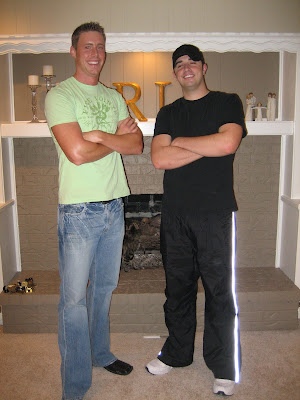 Another thing you should know is that Miles is about 6'7 making my tall husband look short at 6'4. Regardless, when I am with both of them I feel like I have two bodyguards. We don't get to see Miles as much as we would like these days since he lives in Ohio and we're in Texas. Thank goodness for phones. We miss you man!! Come visit soon and we hope you had a wonderful birthday! 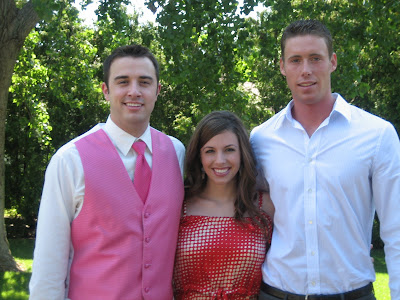 Another milestone that happened this last week, on Sept. 20th, was my best friend's one year wedding anniversary! See here to reminisce. I cannot believe it's already been a year from the big celebration but it also feels like it should be more then a year! I think it's just because so much has happened since their wedding. I kept asking her if she was sure that it was just their one year anniversary because they've been together for so long! Matt & Kara live where I am from in Kansas City, too far away from me.
The beautiful couple, Matt & Kara 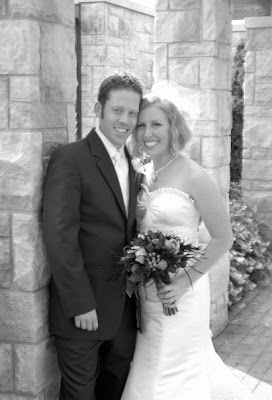 Yes that's me in the background. I got my girl's back. That was such an amazing day. Miss you guys beyond belief! Come to H-town immediately. That is an order! 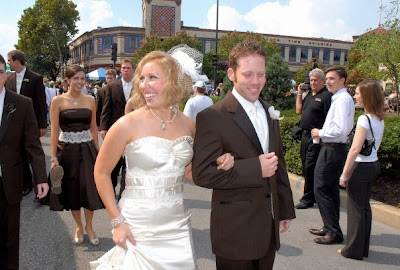 We miss our best friends so much. It's hard being so far away from family and friends. :( Some days are harder then others...