After work, on our actual anniversary, Ryan & I tried out an Italian restaurant near our house. I just so happened to be on the phone with my mom when we walked in because she was wishing us a happy anniversary. As we sat down my mom could hear the waiter through the phone and demanded talk to him. I was a little embarrassed and Ryan was mortified that I was handing the waiter my phone to talk to my mom. :) The waiter looked pretty confused like I was trying to punk him or something. She ended up telling him that it was our big day and to give us a free dessert. Ha! Oh moms, they can be so embarrassing sometimes but we did get a free dessert out of the deal. Thanks mom! You're the best! This pic is for you. <3 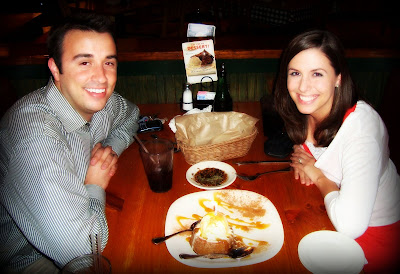 I also made some cupcakes this week that I will post on later but wanted to show you two that I made just for our anniversary. I was trying out fondant and homemade butter cream icing for the first time. I think they turned out pretty cute. 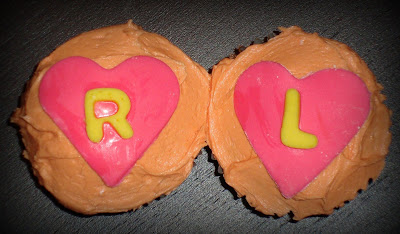