Have you heard of Jillian Michaels 30 Day Shred? Let me just tell you... I can barely move. I will first start off by saying I had no clue what "Shred" was. I kept seeing people referring to it on their blogs, and I just thought maybe it was some kind of workout equipment. Curiosity got the best of me and I finally googled it. I found it here on Amazon for $8.99. Once I read about it, I thought "What the hay, let's give it a shot". If you don't know Jillian she is one of the main trainers on The Biggest Loser. (I want those abs.) 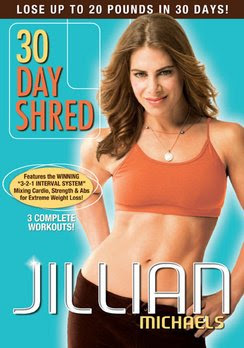 There are three 20 minute workouts each harder then the next. My first thought was that level one would be a piece of cake and I wouldn't even be sore. 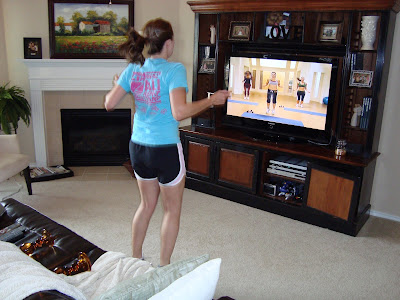 I could not have been more wrong! After the first five minutes I thought I was going to keel over. I'm not in the best of shape but I didn't think I was going to practically crawl my way through it. Lets just say I will be sticking to level one for awhile. There will be no moving up in levels until I can get through the exercise without crying. 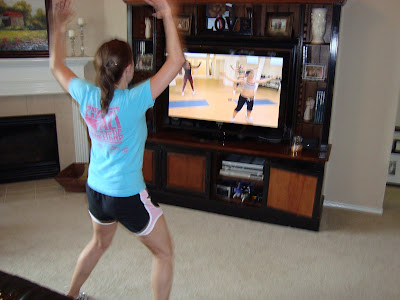 Just to make sure I wasn't a wimp, I made Ryan do it with me the second day. I thought he was going to have a heart attack. His profusely sweating body confirmed for me that this is indeed a hard workout. (He wouldn't let me take a picture of him while jumping up and down, go figure!) I really like this video because 1. it's only 20 min, not a big time commitment 2. it really works you hard so you know you are getting results 3. I think it's something I can stick to. If I don't go running I can just pop this video in and still get a good workout. 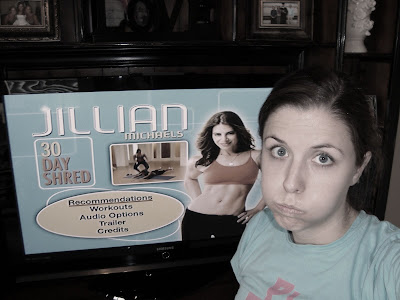 I will let you know how it goes. Also you will need weights with this video. I wouldn't recommend any more then 5 pounds. I didn't have any hand weights for the first time so I ended up using candle sticks! So I went and bought some for the second go around. I only used 3 pound weights the this time. I can barely lift my arms to type. So with that, I am going to go crawl into bed and relax. Goodnight!