This was our final day in Italy. :( I took some pictures of the outside of our apartment building where we stayed because there is a funny story about it. 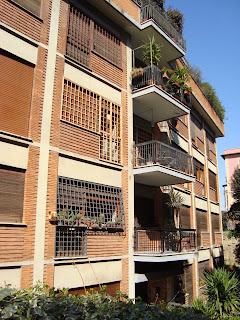 The first day we arrived in Rome we had no clue where this apartment was. After driving around and nearly killing ourselves on the narrow streets we called our tour guide who had set this up for us. She eventually got us to our road. We thought we had made it... Boy were we wrong.

The apartment building number was 7 but there ended up being four different 7's! Imagine us climbing a steep hill with all our luggage trying to hunt down which building number 7 was ours. As we were searching a nun came flying out of one of the buildings and ushered us in. We were a little confused but glad someone came to find us. She proceeded to check us in and gave us 5 room keys. All five rooms were spread out over three floors and none were together. We thought we were supposed to be staying in one apartment with a kitchen. Things were just not adding up right as we put our stuff in the rooms and the place was like a hospital setting.

Eventually, Emily decided to go talk to the front desk again and explain this was NOT what we thought we were getting and there was an extra room that we didn't need. After much confusion the nun realized that we were not the ones she was expecting! A few of us cried tears of relief because it was not in our plans to stay at a nunnery. I should have known when I told the nun I wanted to stay with my husband in the same room and she gave me a funny look.

All and all, we did wind up finding our apartment that was indeed wonderful. I was very thankful that we were all able to stay together, but what a story! 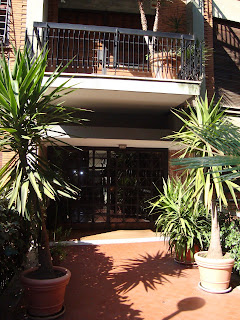 There was a marathon going on this day. I would run a marathon if it were in Rome! On second thought... I might run about a mile and then head off to do some shopping. 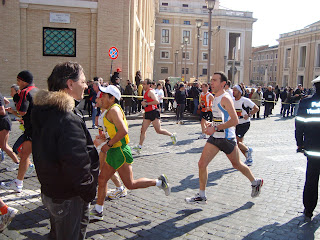 Since today was our final day in Italy, Sally wanted to take us to a special town that was the site of one of her architectural projects. On the way there all the excitement of the trip caught up with Ryan. 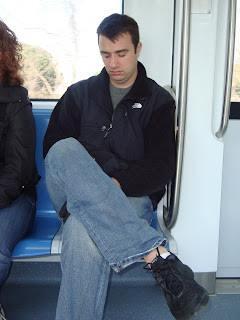 Of course we had to mess with him! Emily was the perfect candidate. 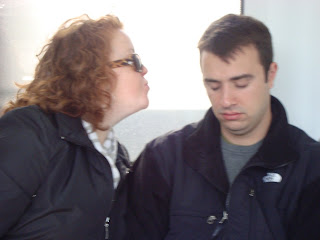 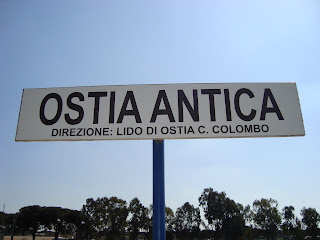 Ostia Antica is a large archaeological site that was the harbour city of ancient Rome, which is approximately 20 miles northeast of the site. "Ostia" in Latin means "mouth". At the mouth of the River Tiber, Ostia was Rome's seaport, but, due to silting and a drop in sea level, the site now lies 2 miles from the sea.The site is noted for the excellent preservation of its ancient buildings and magnificent frescoes. 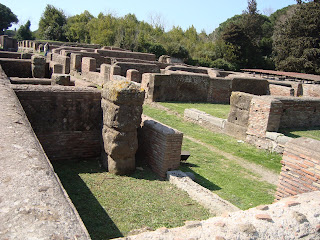 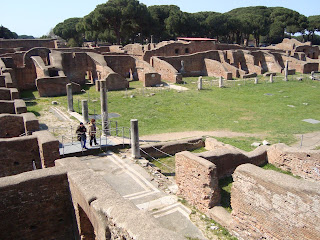 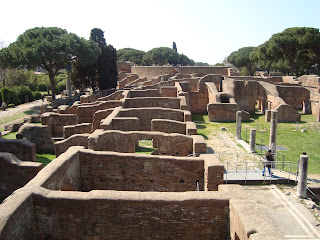 Mosaic floor in the baths, dating from the 2nd century A.D. This was the site of Sally's project. Her goal was to make this area more enjoyable and enriching for tourists. Such as, how she could enhance this experience for the viewers. It was really neat. 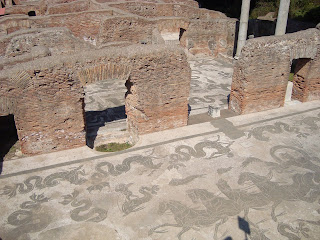 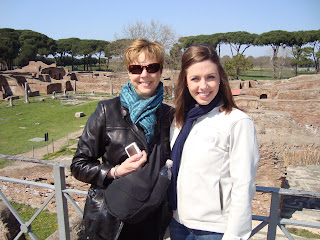 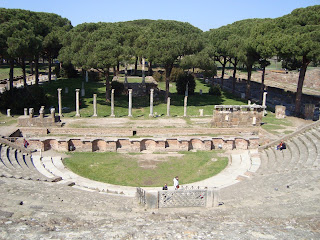 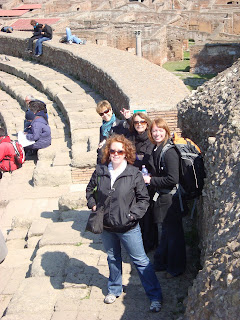 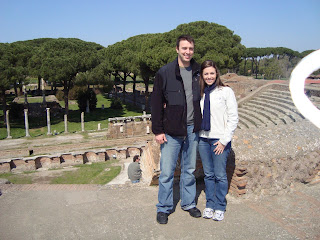 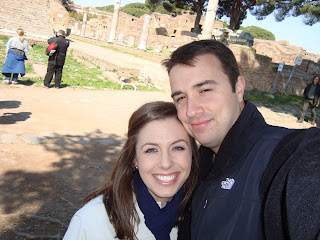 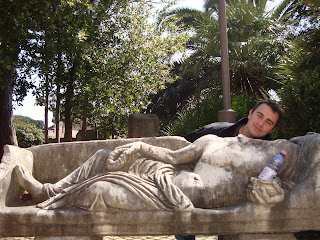 Once we left Ostia Antica we headed to the train station to see Sally off. It was really sad to see her go. Only a few more short months and she will be back! 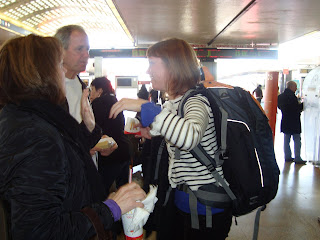 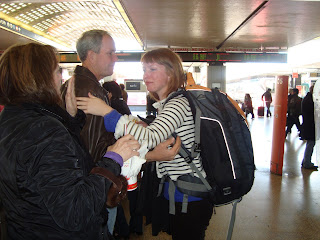 We had a few hours to kill in between her train and ours so we headed back to our apartment to grab our stuff and bummed around for a bit. Let me just tell you it was intense going from our apartment with all the luggage and dragging it across pebble stone roads through Rome to the metro and then to the train station. It had to have been a million miles! Look at poor Ryan's sweaty back. That's probably what all of ours looked like but I didn't get a picture of that. :) 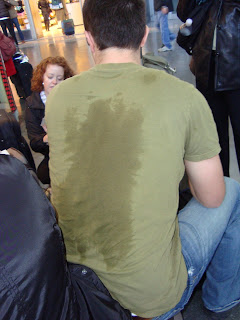 While we waited in the station a very friendly French man stopped by to ask where his train to Paris was. It just so happened Susan & Emily were on the very same train! They were going to extend the trip and visit Paris and London for a few days. Anyway, this man was very confused and couldn't see anything past his hand! I don't even know how he got to the train station. So he sat with us until their train left. He was very entertaining and I think a little senile. He liked my mom a lot and even gave her a kiss on the cheek. 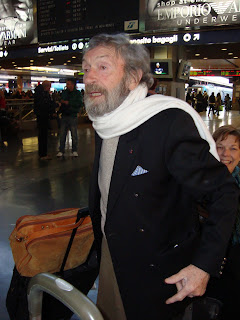 Lets just say the rest of our trip back home was not worth taking pictures of. It was completely miserable! When our train finally got there we had no clue which compartment of the train was ours and we ran up and down it until we finally figured it out. We were on the train from about 7pm to 1am when it arrived in Venice. Ryan & I stayed awake the whole time and Harlan & my mom barely slept.
Then we stood at the train station for maybe an hour until luckily a taxi passed by or we would have been there awhile. It took us to the closed airport that we couldn't get into until Ryan pried open a door! Then we tried to sleep on some benches with little success until we could check in around 4:30am for our flight at 6:30am.
We flew to Amsterdam and then on to Minneapolis, MN where Ryan & I had about a 5 hour layover and didn't fly into Houston until about 10:30pm that night. We went to sleep about 11:30pm and went to work the next day! WE WERE INSANE!!! Moral of the story, take the next day off after a trip like this and it is worth spending a little extra for direct flights. :oP
All that being said, it was an incredible experience and I am so blessed to have been able to
share that with my family. We will always remember this trip and all the fun times we had. Our family will begin changing in the future with little ones and new husbands (for Ryan's sister's :)). I truly cherished this time together just as we are now. We love and miss you guys like crazy!