Our third day in Italy started off with a nice breakfast at our B&B, Casa Arte. Those croissants really got us energized for the day.
Mom, Susan & Harlan 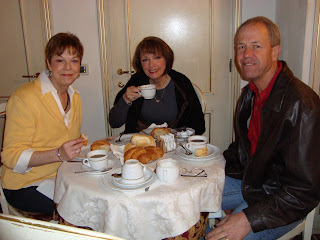 Notice what is in our cups. I'll give you a hint... it's not coffee. ;) Hey! We wanted to fit in with the rest of the grown ups. 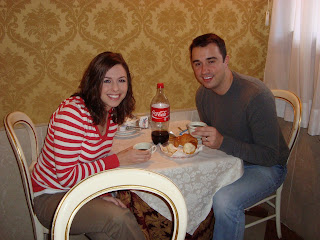 Right before we were all about to get up and start our day, we heard a loud crash followed by hysterical laughter from my mom. 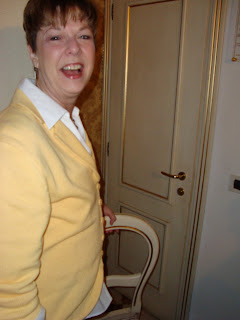 Apparently, she had somehow disabled the chair in a matter of seconds! She must be Houdini. I thought for sure the owner would make her pay for it but he just laughed. He did, however, keep anything breakable away from her after that. 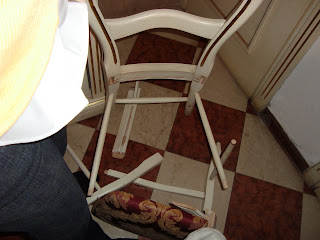 Once the chair mess was cleaned up we hit the streets of Venice. I am not kidding when I say cars drive down these roads and push all the pedestrians against the walls. 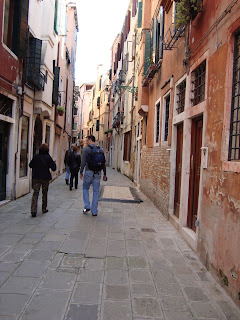 There were so many interesting shops and art galleries. The one below was one of my favorites. Everything was carved out of wood and there was such movement to all the pieces. I almost didn't believe that it was really wood! (Hard to tell in this picture though) 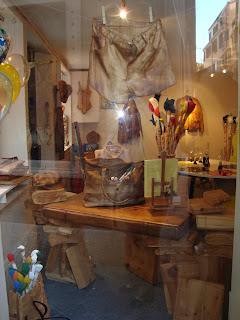 We only had half a day in Venice so we hit up the Palazzo Ducale. This was a family called Doges' Palace. It has a very Gothic feel to it. I am so glad we made time for this, because this palace was the highlight of Venice for me. 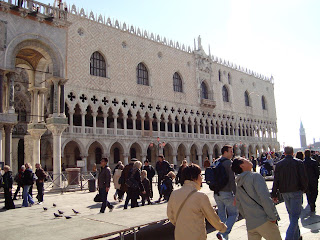 An outside walkway of the palace. 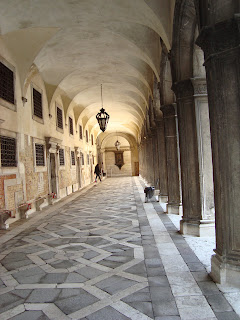 This is the inside court yard of the palace and my mom. 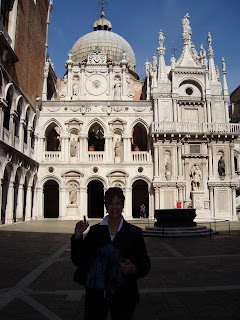 Another view of it from up on the second level. 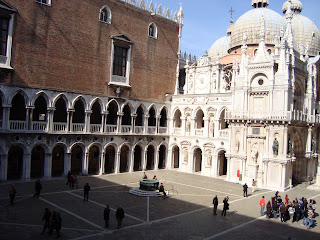 Everything was so ornate and detailed. Incredible. No detail was spared in the making of this palace and that even includes these gorgeous golden stairways inside. 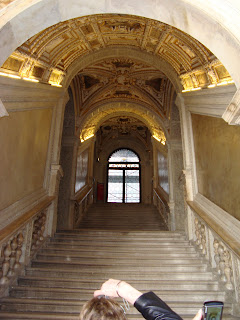 I wasn't able to take too many pictures in many parts of the palace but I did get a few of the jails that they kept their prisoners. I had no idea that they actually had prisons in their own palace! Freaky. This was from the outside of it. We walked all throughout them and they just kept on going. It was noticeable colder in there and they said it was due to aluminum roofs so that when it was cold it was really cold and when it was hot it was really hot. I guess they didn't want their prisoners too comfortable. 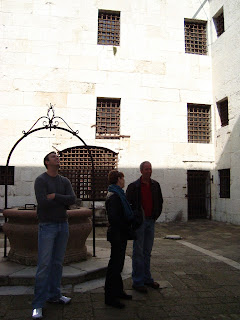 These were a few of the dungeons they kept them in but there were ton a lot smaller than this. The doors were tiny! 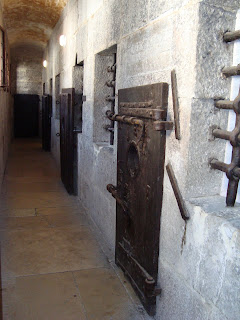 This is the Bridge of Sighs where they lead their prisoners from their jail cells to either be tried or they were walking to their death. They could look out these windows and see Venice one last time. This palace also contains their own courtrooms. It is insane. 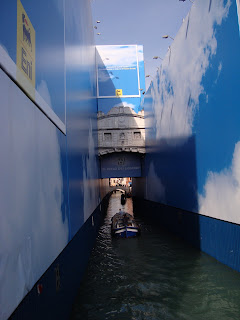 It was under construction when we were there but we got to walk through it. It is actually a lot bigger than this. 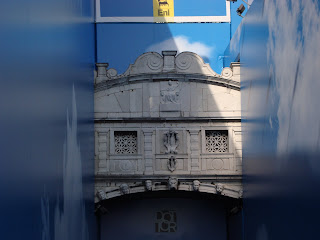 The whole gang minus Sally again. (She was still with her class at this point) 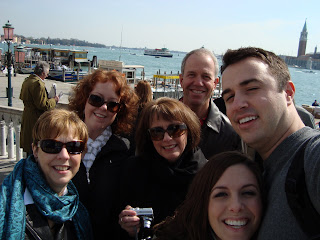 Susan had to get a picture with this odd looking figure. We're not sure what it is but it definitely gets you curious enough to go in their shop. 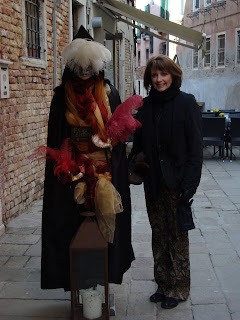 Our day in Venice was coming to an end and we checked out of our B&B and waited for another water taxi. 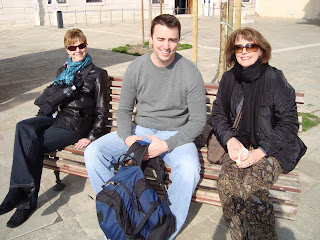 I just want you to have an idea of the luggage we were dragging around Venice. This doesn't even include Sally's yet! 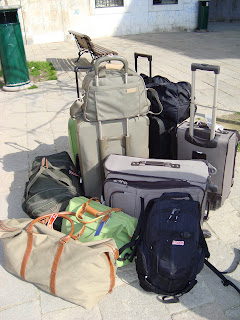 Final looks at the canals. 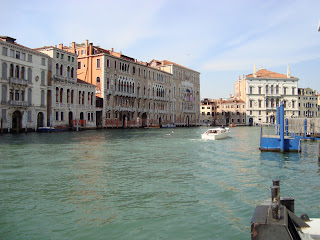 Once we got back to the main land we picked up our rental van that seats 7 people, but that doesn't include all our luggage...
Here we are completely stuffed to the rims with luggage sitting on top of us. 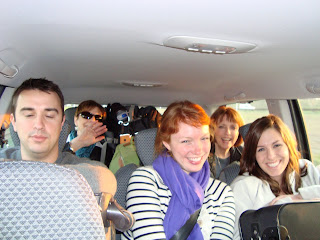 Of course my mom had to entertain us again with one of her many shenanigans. Just look at this picture and tell me what's wrong with it?
That's right, my mom took the seat belt from the seat in front of her and tried to make it work for hers. I had to inform her that seat belts even in Europe don't fasten like that. They usually come from behind you and I'm pretty sure the way it was in this picture it wouldn't have saved her in a crash. 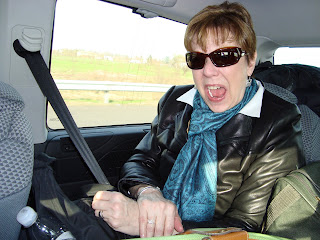 After we got settled with the car and figured out the seat belt situation we headed on to Verona to pick up Sally where she left her classmates. Then we made the treacherous drive on to Cinque Terre. There are scary drivers in Italy!
We stayed at Ostello 5 - Terra Hostel. It was the only hostel we stayed in the entire trip but it was so worth it this one time. It has a gorgeous view and was completely renovated inside. We stayed in a 6 person dorm room and shared one bathroom though... Harlan had to bunk up with some other guys in another room since there were 7 of us. It worked out alright. 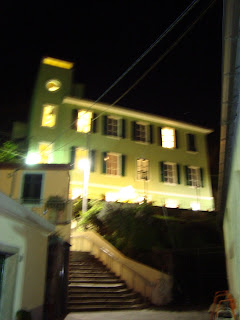 We didn't do too much exploring that night because we were so tired and hungry. There was a charming little restaurant that we enjoyed before we hit the hay. 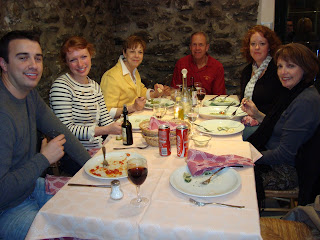 Tomorrow we explore Cinque Terre and all it's beauty!