We just got home from playing several rousing rounds of Canasta at the Haymonds. I must say it's pure domination on the girls part. We made an agreement that who ever wins 5 sets (three games in a set) of Canasta will have a girl/boy day that we all have to participate in. All I can say is, I'm feeling like the massages, nail appointments and watching a chick flick are in Linds and I's near future. We had dinner at a local Mexican restaurant and the boys are still throwing up their Canasta signs. This is when they still thought they had a chance. Ha!
Brad, Lindsey, Ryan & Me 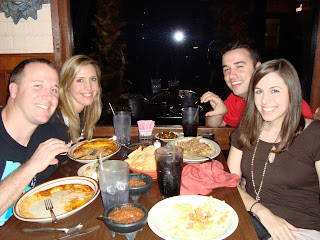 I meant to post these Mardi Gras pics earlier in the week and never got the chance. KC got really into the holiday! 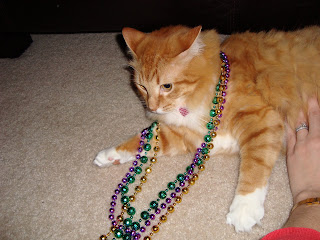 He was protective of his beads! 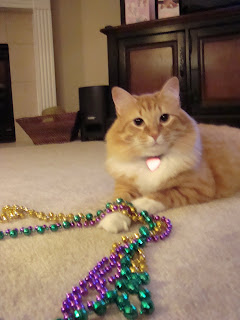 In honor of Mardi Gras I baked a King's Cake for the first time. I hadn't even heard of them until this year! So I thought I would try it out. I got the recipe off Sandra Lee's Semi-Homemade show, but I tweaked it a little bit. Her recipe didn't have any cinnamon or sugar and I heard that is a must in a King's Cake. Ryan ate almost the whole thing in one setting so I would say it was a success. I might try a harder recipe next year. We'll see. :) 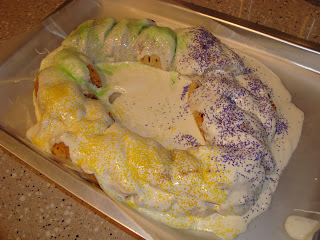 Ingredients
1 (13.9-ounce) can bread sticks (I used cinnamon roll dough and just rolled it)
1 (1-inch) heat proof plastic baby
1 (12-ounce) can whipped cream cheese frosting
1/4 cup heavy cream
Green sanding sugar
Purple sanding sugar
Gold (yellow) sanding sugar
Directions
Preheat oven to 400 degrees F. Line a baking sheet with parchment paper; set aside.
Open bread sticks. Press together the ends of 2 of the sticks to make 1 long stick. Repeat with the remaining bread sticks giving you 6 long sticks. Taking 3 at a time, loosely braid together. Repeat with remaining dough. Pinch the braids together end to end. (Again, I just used cinnamon roll dough and rolled it into a long stick)
Leaving a 3-inch hole in the middle, loosely coil braids around one another on prepared baking sheet. Press ends together.
Bake in preheated oven for 16 to 20 minutes or until completely golden brown. Remove from oven and cool completely. Carefully insert the baby into the cake in between the seams of the braid.
In a medium pot combine the cream cheese frosting and heavy cream. Heat over low heat until warm and smooth, stirring constantly. Pour glaze over cake and sprinkle with sanding sugars.