We are honoring Harlan, Ryan's dad, today! Man, we've really had a string of birthdays lately and even one coming this weekend. Back to Harlan. He is truly one special guy and I see where Ryan has gotten many of the attributes that I cherish. Ryan followed in many of Harlan's footsteps like going to KSU and being a DU too. Harlan went on to get his MBA and decided to go back to the family farm and help out. He has been farming almost his entire life and he is darn good at it too! He could fix anything you brought him. His reputation of generosity, genuineness, and his ability of 'never meeting a stranger' are all things I really admire about him. I feel blessed to be his daughter-in-law. I really couldn't have asked for a better father-in-law!! You are the man!! :oP 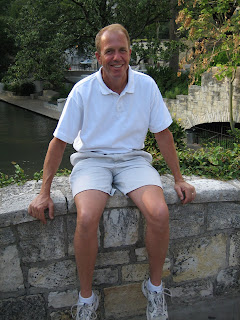 Harlan will do anything and go to the ends of the earth for his kids. He has put his kids and wife far before himself. He has been an incredible example for Ryan.
Susan, Ryan & Harlan in San Antonio, TX when they came to visit us in 2006 when we were completely home sick. 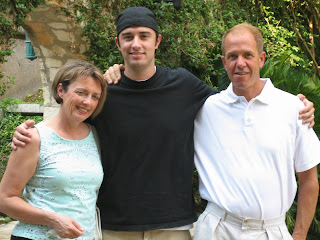 He married his college sweetheart after finishing up school, and brought her back to the farm. Are they not the cutest couple ever?!?! 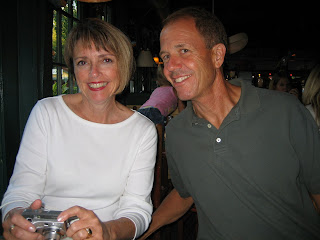 I think Harlan has really taken to our kitties. He is the best kitty grandpa around! 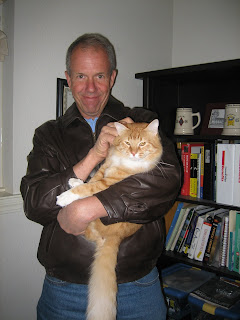 One of Harlan's many talents is a thing called tennis ball rocket. He comes up with the best ideas and loves trying new things. So it shouldn't surprise me that this was one of them. 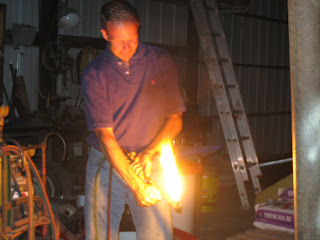 He fills a metal tube thing with gas while the tennis ball is plugging the top so it suctions it in the tube. (I am horrible at explaining it. You should ask Harlan! He could tell you about it in detail). Then you hold a punk up to an opening and the tennis ball flies up in the air with a LOUD, sorry scratch that, DEAFENING bang. The anticipation for the explosion is the worse! You can see in the pic below. (If you click on the picture you can see it better.) 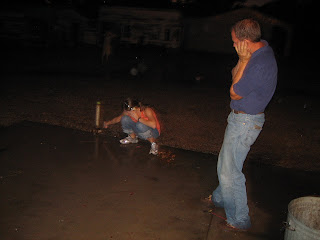 If you were wondering where Ryan gets his orneriness from you can look no further. :oP
Harlan is also the best person to talk to. He seems to know at least a little if not a lot about almost any topic, and if he doesn't know he wants to know. Probably one of my favorite things about him is the fact that he is a garbage disposal. He can eat like no one I've ever seen, but yet he stays so skinny! It's all that hard work he puts in during the day plus he works out early almost every morning. But seriously, he will eat until someone has to tell him to stop or he could hurt himself! Ha! (Evidence below, and this was after a huge dinner, and I think this was his second helping of dessert.) 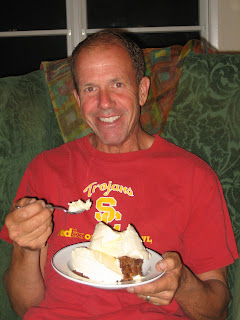 So Harlan I hope you have an amazing birthday! Wish we could be there to help you eat your birthday dinner... wait you don't need help. I am so thankful for you everyday and you are a testament for how your kids turned out. Awesome!